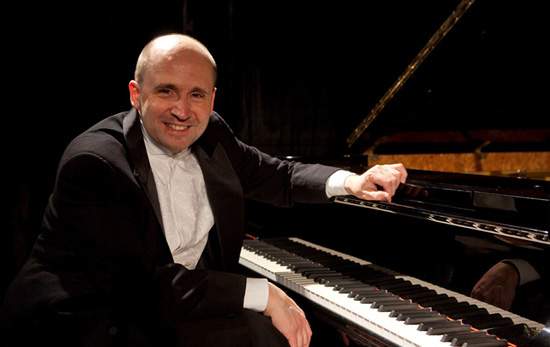 Pianist, composer and Jacobs School of Music Faculty member Émile Naoumoff holds the unique distinction of being the last protégée of composer and teacher Nadia Boulanger. Born in Bulgaria, he was considered a child prodigy and performed the premiere of his first piano concerto at age ten with Yehudi Menuhin conducting. Under the guidance of Boulanger, he studied composition with Jean Francaix, Robert Casadesus, Leonard Bernstein and Aram Khachaturian. Naoumoff also studied at the Paris Conservatory.

Though widely acclaimed as a composer, it is Naoumoff's piano skills that brought him to IU, where he is an Associate Professor of Music. His performance career got off to a remarkable start in 1984, when he stepped in as a last minute replacement to perform the Tchaikovsky Piano Concerto No. 1. Over the years, Naoumoff has performed with the San Francisco Symphony, the National Symphony, the Berlin Philharmonic and the Residentie Orkest of the Hague.

Naoumoff has received many honors, including the Médaille d'honneur de Paris and the Prix de Composition de l'académie des Beaux Arts. An active participant in summer music festivals, he has attended the Marlboro Festival, Santander Summer Masterclasses, and the Verbier Academy Festival in Switzerland.  In the tradition of Nadia Boulanger, he conducts his own summer academy at the Chateau de Rangiport in Gargenville, France.

WFIU will feature performances by Émile Naoumoff throughout our classical music programming in the month of November.