Emergent Theatre: The Revolution Will Not Be Televised 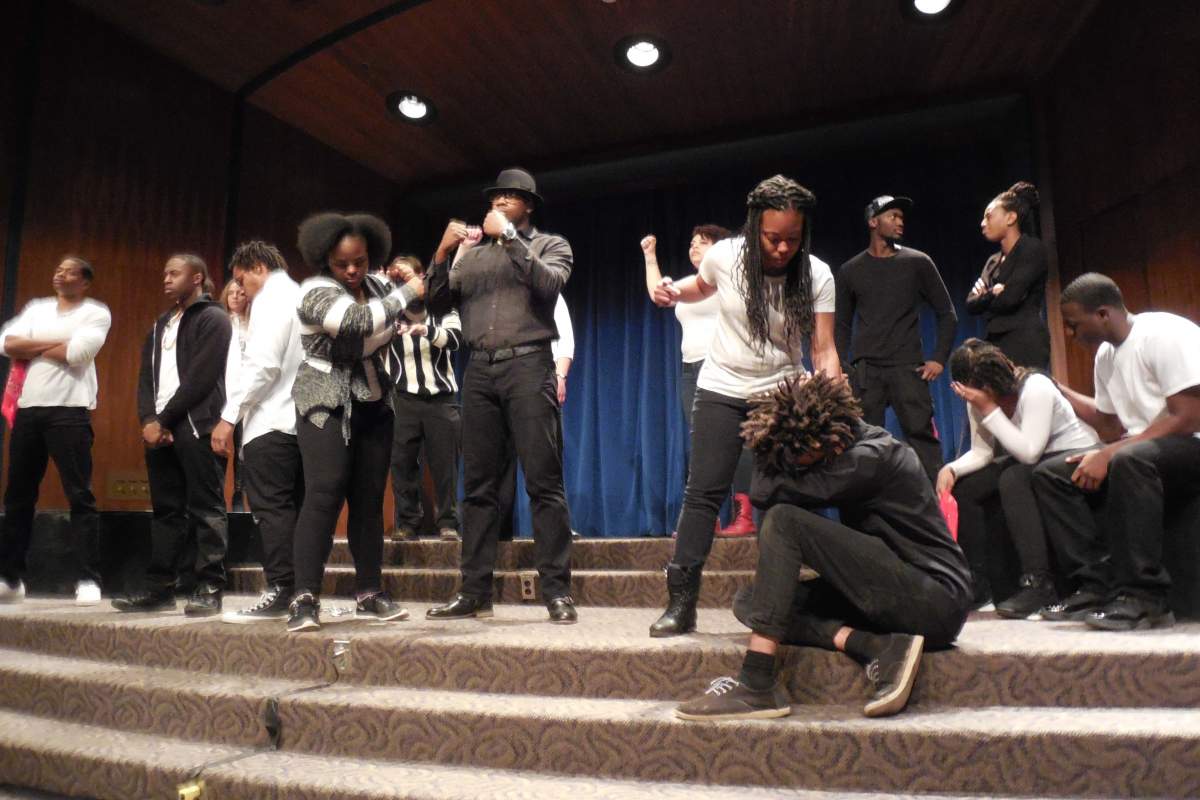 Act One: Setting The Stage

"All of these students gain a sense of self. They become activists in their own right. Many of them take the work and strategies and then go out and use them," Prof. Weltsek explains.

From the start, Love's aim was to set the stage for student performers. Over the course of three years, student cast membersÂ would increasingly take over leadership of the project. Now in its third year, Emergent Theatre is directed and produced by IU students Ignoisco Miles and Nichelle Whitney.

"What we do isÂ bring together people from of all different backgrounds with the intention of breaking that fourth wall when it comes to talking about social justice," says Whitney.

Act Two: Emerging and Merging Together

The group practices "emergent" techniques, improvising and letting ideasÂ take shape over time. Cast members attend a series of writing and performance workshops over several months, all the while collaboratively contributing program content.

"What you're doing is becoming a co-creator and co-performer with other individuals. You might have very disparateÂ life experiences, but when you start merging together, you produce something that is supernaturally organic," says David Frew.

"Art is the manifestation of thought," Marcelis Byers explains. "Emergent Theater takes your thoughts and pushes them outÂ [and]Â makes a beautiful collage."

Following the previous programs "Catalyst" (2013) and "Revolution" (2014), the group chose "Justice?" as this year's title and theme. Shortly thereafter, that same question hit mainstream media when the grand jury in Ferguson decided not to indict Darrren Wilson in the death of Michael Brown.

The timing inspired serious discussions, says Jeron Braxton. "Right now with the protests in Ferguson, there's a lot to draw from the injustices in America. The hard part was limiting ourselves."

One of the opening pieces, called "Hands Up," juxtaposed hand-waving in church and raised hands at sporting events withÂ Michael Brown's surrendering gesture.

Lawrence Shawarira echoed Gil Scott Heron in his spoken-word piece "Hip Hop Lesson," reminding that "the revolution will not be televised."

In "Be Free," Chris Redding, Jr., rapped about the struggle to succeed when someÂ don't think #blacklivesmatter:

We fight for the love. We fight to see a better day.

To be more than what we was!

I wish you could see me.

I wish you could love me.

I wish that we could BE FREE.

Act 4: Making a Punchline Out of Justice, Delayed

Other pieces took a different tack: biting social satire. In a skit framed as an informercial,Â two pill-pushing celebs endorse Justiciaâ„¢:Â "a revolutionaryÂ new prescription drug that serves justice for you." Blissed out and braindead, they celebrate because "NOW justice is [just a] feeling!"

Another infomercial skit took as swipe atÂ the modern prison industry.Â Â Making a pitch to business owners and entrepreneurs tired of paying minimum wage, two T.V. salespeople introduce a "new" product: SLAVES. Provoking uncomfortable laughter, the two explainÂ how to getÂ around both minimum wage laws and "that whole Emancipation Proclamation":Â Outsourcing jobs to prisoners. Prison labor is 100% free because, "asÂ it turns out, human beings that have been incarcerated lose certain rights."

Other topics addressedÂ included gay rights, gender politics, poverty, andÂ classicism, among others, using differentÂ approaches and different media. Aleya Beckwith, who wrote skits about sexual assault and job discrimination, describes the audience reactions she tries to elicit:Â "Some people may may find it funny, some people may find it sad, some people may get pissed. I just want them to feel something. And to just speak up."

"The biggest thing about this," reminds Ignoisco Miles, "is that it provides a place for conversation to begin."