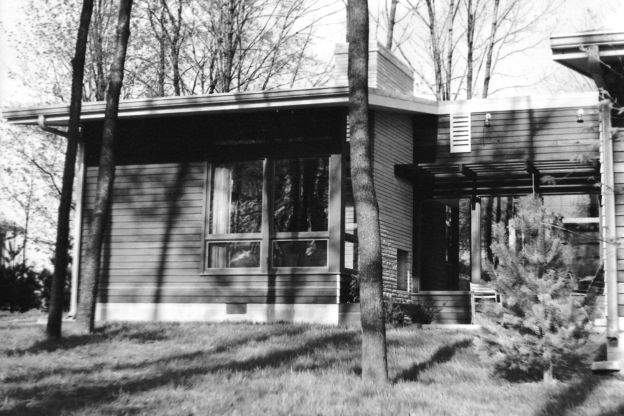 In architectural design, it seems, there's a lot of cycling. Consider how many different architectural styles, for example, end with the term "revival."

Before low-slung, ranch-style houses came to proliferate in every American subdivision, one self-taught female architect built eleven unique, modernist residences in Bloomington. The architectural legacy of Elaine Doenges was the subject of the inaugural speech in the city's Rosemary Miller Lecture Series on Historic Preservation.

Launched From A Flat Roof

Longtime Bloomington resident Duncan Campbell gave the talk. An Associate Professor of Architecture and Director of the Graduate Program in Historic Preservation at Ball State University, Campbell first got to know about Doenges' local contribution to mid-century modern design when he was working as a carpenter in Bloomington.

"I got a call from the Wikelunds," Campbell recalled. "The roof leaked. And I got out there and thought, â€˜No wonder it leaks; it's flat.' That was my introduction to Elaine."

But the introduction was only virtual. Elaine Doenges herself had long since moved away by then.

Doenges came to Bloomington in the early 1950s as a young faculty wife, with a plan of her own that had long been simmering. Toward the end of her high school career, around 1942, Doenges had spoken with the dean at the University of Syracuse about applying to architecture school there. According to Campbell, the dean had been enthusiastic about her application-even dangling the prospect of a scholarship-but managed to convince Doenges that no one would hire a female architect.

Instead of matriculating at Syracuse, Doenges began the long process of teaching herself architecture. After first getting ahold of the Yale curriculum, upon arriving in Bloomington Doenges steeped herself in architectural history, math and science, and drawing.

"Elaine became an architect-but not a licensed architect. Henry Glassie has said that anyone who builds buildings is an architect," Cambell continued, citing the renowned scholar of vernacular architecture. "And he's right."

Over the course of her studies, Doenges had become a scholar of the industrial aesthetic that had come to the fore during the first half of the twentieth century-in which functionality and economy of scale prevailed. A building engaged its natural surroundings, and new construction materials informed design trends. Phillip Johnson's Glass House was a prime example, along with Frank Lloyd Wright's prairie-style homes, and the Houses of Tomorrow that were showcased at the 1933 Chicago World's Fair.

"These houses were built out of concrete block and stainless steel," Campbell explained, "and had flat roofs and windows on the corners, concrete floors and pipe rail hand rails and lots of glass block."

Doenges' first interpretation of the international modern style is still standing on Hillsdale Drive in Bloomington, an 1100-square-foot redwood-clad jewel-box all but obscured from the street by its own artful design and some well-placed shrubs. Doenges' own home, it was also the first she built from start to finish.

Takes One To Know One

After designing her own place, Doenges started hiring herself out to people she knew. Despite Elaine's machine-age design style, the appeal for her clients lay in the way Elaine personalized each home.

"She knew these people personally because they were all faculty members," Campbell emphasized. "The idea that you could hire someone you knew to design your own space was pretty novel. This is the time of post-WW2 developer-built tract houses."

Elaine's empathy for the lives her clients were living was especially evident in the separation between public and private space in these small residences. At the time, there was a lot of entertaining among the young faculty set. Reception rooms needed to be spacious and flow from one to the other, while privacy (at a particular premium in a 1100-square-foot home) was often achieved with a utility corridor off the kitchen.

That narrow corridor, along with the galley kitchen, central hearth and copious built-ins, were recurring motifs in Doenges' houses, along with exposed beam sloped ceilings, corner windows, and various newly available products Elaine deployed-from the high quality wood paneling she installed in four-by-eight panels across walls and ceilings to the richly-hued concrete floors.

The homes are also distinguished by the way they communicate with their surroundings: copious use of glass, along with the consistent appearance of patios, balconies, breezeways, and porches evince Doenges' interest in the indoor-outdoor relationship.

No one is quite sure whether she designed any more houses after leaving Bloomington in the late sixties, although many of her Bloomington clients exchanged Christmas cards with Elaine at addresses in Hawaii, Oregon and North Carolina. At least two of the original owners are still living in the nine extant Doenges houses, which are scattered across Bloomington, on Hillsdale, Moore's Pike, Browncliff, Pleasant Ridge, Nancy, and Rose.

Although Doenges' version of "modern" has a certain datedness to it, the homes' clean lines, small footprints, and environmental orientation remain very contemporary.