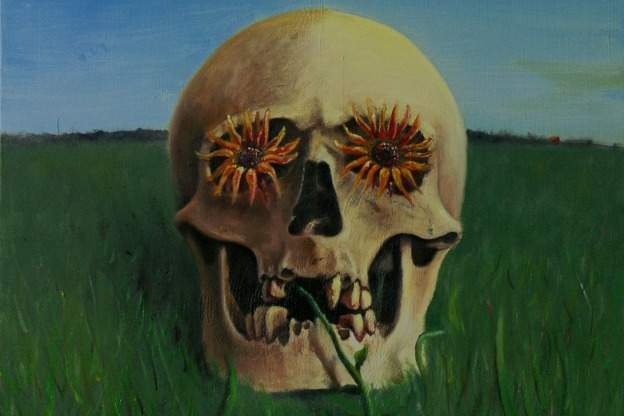 Ars longa, vita brevis. As the saying goes, you're not around for that long, so while you're here, make something that will outlive you. It's the conceit behind a whole lot of art, literature, buildings and music. But if we're talking immortality, why not take the conceit one step further? The Greeks created the ekphrastic poem to describe a work of art so that a reader, or listener can recreate the artwork in her imagination. Once the essence of a work of art is liberated from its physical presencethe ekphrastic tradition suggests-its legacy is golden. The tradition has persisted in literature (John Keats' Ode on a Grecian Urn) and music (Ottorino Resphigi's Botticelli Triptych) among other art forms. At the prompting of the proprietors of a Bloomington art gallery, ten local poets wrote-â€“and have been performingekphrastic poems about ten works of visual art by local artists. Â The readings take place in the gallery where the the paintings are hung at The Venue Fine Art and Gifts.

Poet Patsy Rahn chose to write about a painting by Ray Perigo, Die Sonne Scheint Mir aus den Augen (above).Â For the performance of her poem, The ten teeth of death (transcript below), at the Venue Saturday evening, May 16, Rahn incorporated the voices of theÂ audience members.Â Excerpts from that performance are interspersed in the conversation between Rahn and Perigo, that can be heard above.

The ten teeth of death

The skull sits upright in the field of grass

its smooth cap shining warm in the afternoon sun

five above and five below,

almost enough to chew a meal with.

a song to love and the touch of flesh

a song to pain, its enduring and healing

a song to regret, the loss and the sadness

a song to gentle happiness and contentment

a song to riotous energy and ecstatic joy

a song to human cruelty that has never changed

a song to hope and transformation

a song to food and nourishment

a song of communication and understanding

a song of letting go