Edward Bloom--Big Fish (in a small pond) at IU 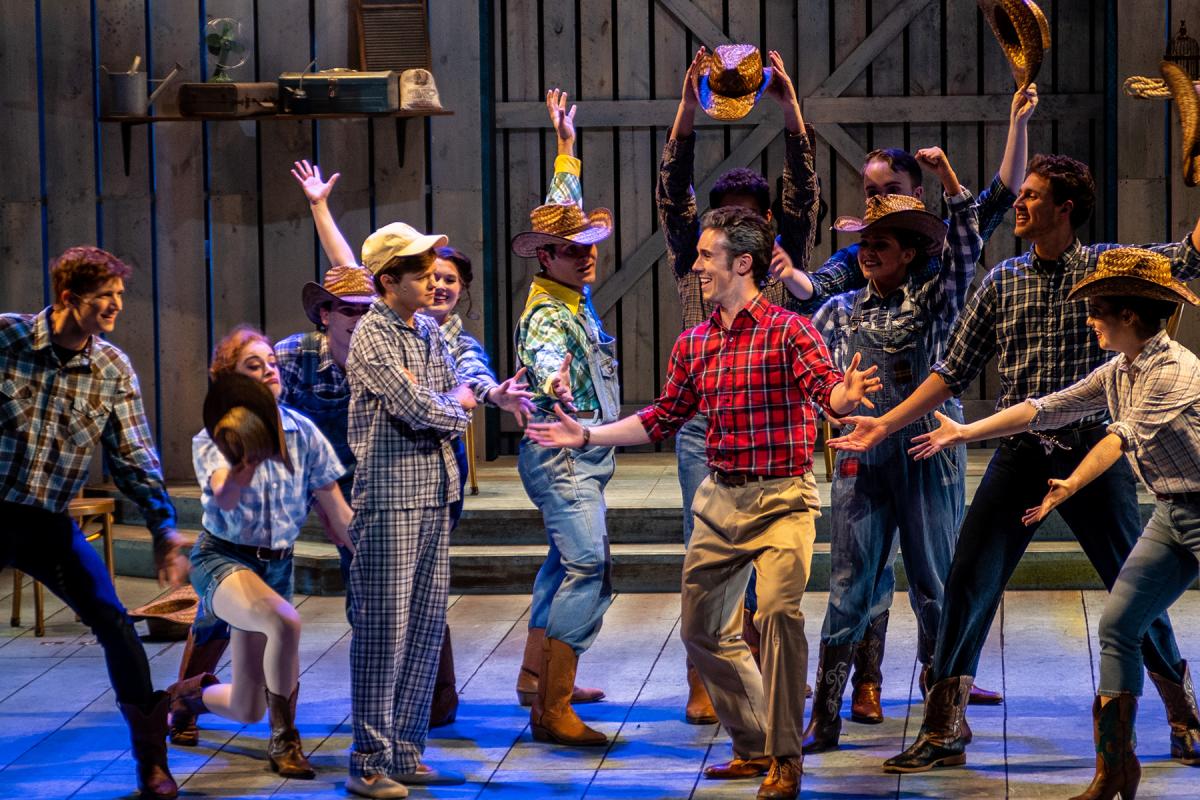 Edward Bloom's story seems to be going over well with everyone except his son Will (IU Department of Theatre, Drama and Contemporary Dance )

I’m George Walker for WFIU Arts. Big Fish at IU’s Ruth N. Halls Theatre is a musical account of a son, Will Bloom trying to salvage the relationship with his story telling father, Edward Bloom. As the young man says, “he told stories about things that he didn’t do and concealed things that he did do.”

Big Fish directed by Richard Roland is an episodic evening that plays with time and reality. Ray Fellman who prepared the singers leads an unusual sextet of keyboard, bass, drums, guitar, violin and cello. The imaginative choreography is by DJ Gray and if you’ve ever wondered how many ways basic chairs can be used in a show this is the answer for you. Elizabeth Grace Davis’s costumes include the giant’s stilts, the witchs’ costumes, the mermaid’s attire and lots of color and variety for the large cast. Reuben Lucas is responsible for the rounded barn setting with big doors at the rear and pairs of side doors. He’s also the creator of the projections on the board walls of a town, a river, rain fall and just patterns.

The show opens with father Edward, Benjamin Dow singing “Be the Hero” …slay the dragon, storm the castle…to his young son and it ends with grown son Will, Sam Sanderson, singing the same song to his own son. In between there’s the story and the stories in song and dance of Edward’s life

“Alabama Stomp” is Edward’s number that gets the whole cast dancing and the fish simply flying up out of the river. A bit earlier, or maybe later he and his home town rival Don Price, Kevin Dolan venture into the swamp to consult the witch, Danielle McKnight and her mixed coven. She shows Edward his death and in story after story he checks to be sure that this isn’t the one where he dies.

The act continues with more stories. Although Edward is linked with his Ashton home town honey, Jenny Hill, Allison Demers, he’s out on the road for adventures. Lisa Podulka supplies one memory as Edward claims that he saw her as a charming mermaid. Back in Ashton its Edward to the rescue saving the place from the giant Karl, George Mulder. Later he falls for the tap dancing Sandra Templeton, Maya McQueen at a circus tryout. Edward is anything but easy in his aspirations and he works for the show’s Amos, Taylor Ward for three years to gain clues about Sandra’s whereabouts. Speaking of wheres…Amos is a werewolf. During this act son Will weds Josephine, Madelyn Allender and Edward spills the beans that she’s pregnant. The act ends as Edward and Sandra are united in a real and a projected field of her favorite daffodils.

In the second act son Will ruminates on his continued puzzlement about his father and his anticipated fatherhood. For Will it’s a matter of two strangers, one with a twisted past and the other with an unforeseen future. He questions his father and Edward reacts in anger as his storied life is tested. And then there’s the set of scenes about what Edward actually did do, but doesn’t talk about. It all is foreshadowed with Will and Josephine finding a deed to a house in the name of the hometown honey Jenny Hill and Edward. A scene from the past has Edward with financial help from Carl the giant and Amos the werewolf convincing the Ashtonites to move from their site of a new lake to “Start Over” on safe higher ground. When Will actually visits Jenny Hill in her home, she simply says that he doesn’t understand and leaves it and us there.

Big Fish offers a strong cast of singers, dancers and actors. Benjamin Dow as Edward is the main focus of Big Fish and as the younger and the older is a fine actor and a strong singer. Maya McQueen is an engaging tapper at the circus and a sympathetic and clever wife to Edward and mother to Will. Madelyn Allender is a charmer as Will’s pregnant wife Josephine. Danielle McKnight is a frightening witch with a magical crystal ball and the forecast of the details of Edward’s death. George Mulder, on stilts and later still quite tall was Carl the giant. Lisa Podulka made a fetching mermaid…complete with tail.

As Adam is dying Will and he go back through his stories and the characters; the prophesying witch, the mermaid, the giant, the werewolf, and the final exit. As the show ends Will has found the truth in the stories and he’s singing “Be the Hero” to his own son in the same way that Edward sang it to him.

Big Fish at IU’s Ruth N. Halls Theatre plays through November 2. You may see this review and other reviews and previews at wfiu.org/arts. At the theatre for you, I’m George Walker.