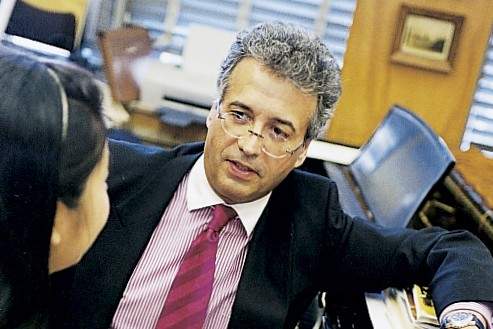 WFIU's Artist for the Month of October is American pianist Edmund Battersby. Internationally celebrated for his performances on both modern and period instruments, Battersby has been a member of the artist-faculty of the Indiana University Jacobs School of music since 1995.

Educated at the Juilliard School, Edmund Battersby was awarded the prestigious Juilliard Alumni Award upon graduation. Shortly after, he made critically acclaimed debuts in both London's Wigmore Hall and the Alice Tully Hall in New York City. An avid recitalist, orchestral soloist and chamber player, Battersby has performed throughout the United States, Mexico, Canada, South America, Africa and Europe. He has appeared with the Pittsburgh, Indianapolis and New Jersey Symphonies, been featured with the Tokyo, Orion, and Vermeer String Quartets, and performed under conductors Nicholas McGegan, Gunther Schuller, and Gerard Schwarz.  A champion of new music, Battersby has performed and recorded works of Olivier Messiaen, George Crumb, George Rochberg, Elliot Schwartz, and William Bolcom and others under the direction of the composers.

Edmund Battersby has released numerous recordings for labels including the Musical Heritage Society, Naxos and Koch. On the modern piano, he has recorded the complete Songs without Words of Mendelssohn, Rachmaninov's Preludes and Etudes-tableaux, Schubert's Klavierstüke, and a critically acclaimed recording of Granados' Goyescas that made the Grammy Short list in 1992. Noted by Fanfare Magazine as "simply a beautiful recording that should be heard by everyone," Battersby's recent re-release of Schumann's Kreisleriana and Chopin's Ballades, Nocturnes and Waltzes was performed on a Rodney Regier replica of an 1834 instrument by Conrad Graf. Also on period pianos are his recorded performances of Mozart and Beethoven's Quintets for Piano and Winds and the complete violin and piano chamber music of Dvořák with violinist Qian Zhou.

An active pedagogue, Edmund Battersby is the artistic director of Harbor Music, the Artur Balsam Chamber Ensemble Classes for Piano and Strings, supported by the IU Foundation since 1999. He has given master classes both nationally and internationally at the Royal Irish Academy of Music, the University of Leipzig, Princeton, Rutgers and Duke Universities. During summer 2013, he gave master classes at the Euro Arts Festival in Halle, Germany and in Dublin, Ireland for the inaugural season of the new Dublin International Piano Festival.

WFIU will feature performances by Edmund Battersby in our classical music programming throughout the month of October.