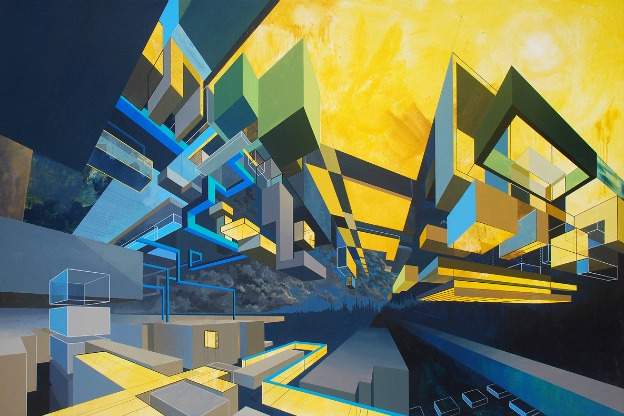 The Indiana Arts Commission has just announced the names of 38 Indiana artists who will be receiving career development assistance through the agency's Individual Artist Program grants for 2015. Bloomington-based painter Drew Etienne is among the recipients. The Indianapolis native and 2009 BFA from IU's Hope School of Fine Arts is currently showing his paintings in the Showers Atrium of City Hall.

At first glance, Etienne's paintings might seem to be apocalyptic landscapes. It's an effect reinforced by his titles. A painting in his current show is called, for example, The End (In the Name of Absolutism).  It's a chaotic scene, in which something may have exploded, sending geometric shapes across the sky.

It's hard to know where we are exactly, or when, although signs point to some dystopia, in which technology has all but eclipsed natural imagery.

"There is a sense of fear of post-industrialization looming over us," Etienne concedes, "and the specter of our earth and our landscape getting worse if we don't pay attention to it. And also us getting absorbed in this techno sub-world."

In Etienne's paintings, this "techno sub-world" appears to be coming to the surface, and overtaking the familiar scenery. Although we see mountains, or clouds, or foliage, these elements of the landscape are being crowded out or subordinated by geometric abstraction. But we know we are still in the world as we know it because it feels like we can enter it. Even Etienne's non-objective imagery obeys the laws of perspective.

If I can get that sense of mystery and the viewer wanting to investigate the painting, that's the most successful I can be.

Although Etienne's command of linear perspective might suggest his devotion to Renaissance sources, it was a far more contemporary application that got him hooked on the representation of deep space within two dimensions:  video games.

Some of the paintings look a little like Minecraft, a sort of virtual Lego game. But more than a stylistic resemblance, it's more about the logic of the space.  "The idea," as Etienne explains it, "that you can try to enter this world and explore, and there are areas you feel like you can get to or maybe there are areas you wish you could get to and you can't and you're wondering what's over there."

Visually exploring the space of a painting, however, has one distinct advantage over the full immersion of the video game, to Etienne's way of thinking, at least:

The difference is that in the video game world, you can see this mountain in the distance and say 'Oh, this looks awesome, I wanna go there,' and you make it there, and you're like, 'Oh cool, maybe I'll build a house here'. But once you get there, you're happy that you've gotten there, but then that sense of mystery is gone to a certain degree, unless you look out towards somewhere else. But one of the things I like about two-dimensional painting is that since you can't explore anything, if there's an area where it's like, 'I wanna see what's around that corner,' you can never actually get there. So you always have that sense of mystery.

Even in his purely abstract paintings, without reference to natural elements, Etienne engages that sense of mystery and longing that comes from looking into the distance without being able to physically travel there. He gestures toward a monochromatic painting in progress that looks like so much scaffolding

Right there, it seems like the light is coming down and there's a shadow is being created by some overhead piece, and you feel like you can go back in there, and you wonder what's in there, but you'll never be able to actually go in there. So you just hop around exploring, seeing whatever little bits of information you can find.

Drew Etienne will be doing some exploring and information-gathering in the real world in 2015, using an Individual Artist Grant from the Indiana Arts Commission to paint on site in the Grand Tetons, a landscape he cherishes, and that pops up from time to time in his canvases. But he has no plans of becoming a plein air painter. His immersion in the wilderness, he hopes, will only enhance his ability to excavate it in his painted sub-world.  Etienne explains

I really enjoy the landscape and I enjoy painting it because I love it so much, but if I were to spend the rest of my career only doing representational stuff I think I would be really unsatisfied because I would never be finding places that don't exist and things that are alien and foreign and mysterious. If I can get that sense of mystery and the viewer wanting to investigate the painting, that's the most successful I can be.