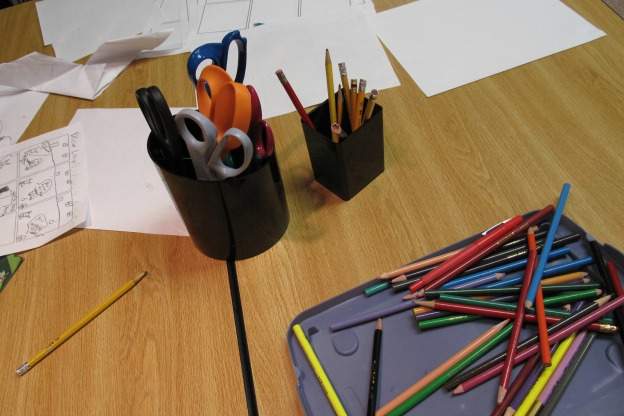 In Monroe County, school's already been in session for weeks, so it's tempting to think back to those endless summer days when, if you were a kid, you might just choose to spend the day hanging out with some friends drawing. On June 27th, 2013, the Monroe County Public Library, with support from Vintage Phoenix, presented the 6th annual 12-Hour Comic Book Day. Using sandwiches and bins overflowing with colored pencils, the library enticed dozens of young people to the marathon cartooning session, where participants were rewarded for their tenacity with a badge for every three hours they kept drawing.

"Neither of us feels like it's very good now," Natalia concedes, "but we had a lot of fun creating it.  We collaborated on the artwork. We split it up by chapter and each created our own set of characters that we wanted to interact in the story."

Collaboration is a familiar theme in this comic book jam session.

"Bill Toad was my creation, but Bob Toad and CyToad were my best friend's creation," explains twelve-year-old Will, who also goes as Cole; "and he usually lets me use those two anytime I want because we work together on most of the comics we make about Bill Toad, Bob Toad, and such."

But eleven-year-old Sal is a bit flabbergasted by his collaborative experience.  "You can see the alien isn't the same color, because I didn't put it there; Hank did."

There are a lot of things that don't get written about because  they don't fit the ideals of what's popular or appropriate for kids," ventures Natalia Kropf-Estell. "So I think it's important to  express something that is actually important, that could have a big impact, something that isn't normally expressed in this style of writing or drawing.

Sisters Are Doing It For Themselves

Another team, by contrast, is a well-oiled machine.  "Hannah does the drawing," explains 16-year-old Leah Clausman, of Ellettsville, "I do the text, and Ariel does the coloring and adds the depth to it."

The sisters work on comics together at home sometimes, so they thought they'd give the library event a try.  But it's not just blithe recreation, apparently; along with their impressive division of labor and unstinting work ethic, they have highly competent drawing and story-telling skills.

"We'd already talked about how we were going to make the story," explains 14-year old, Ariel, "and when we came here we put it together.  We ran into a lot of problems with the story, but we're moving pretty smoothly now."

Their saga involves an adventurer/mercenary who rescues a girl being held by bandits, using a map provided by her father, whose village has been burned down. The action-packed tale, full of made-for-TV dialogue, fisticuffs, and explosions, is one of several unfolding in the room today.  But there's a counter trend at at least one table in the room, where Natalia and Ursathe co-authors of  last year's Twelve are working alongside their friend Carter Makice.

The thirteen-year-olds, who attend Bloomington's Project School, aren't collaborating this year, though; rather, they're drawing together. It's how they hang out.

"I draw with them a lot outside of this space," explains Carter. "We're all working on our own comic books now, though."

"Comic book" is a pretty loose term, if both Carter and the guys at the other table who are busy blowing stuff up are all using it to refer to what they're doing. The cells Carter has drawn on a page in his sketchbook are round, and although they may be read in sequence, each one works on its own as well. Words or simple phrases occupy the center of each circle.

On one page, he's exploring Latin phrases, such as deus ex machina, and in medeas res.

"Right now I'm playing around with different visual representations of figures of speech," Carter explains.  "I had a picture in my mind of what different phrases looked like, and I wanted to put that down on paper."

On another page, he's found different synonyms for the word " lonely".  Simple imagery accompanies each word or phrase. Underneath the words, "like an outcast" stand three generic male figures (such as those you'd find on a restroom door). A fourth figure stands outside the circle.

Australian artist and poet Shaun Tan is an inspiration.  "His art really flows together with his poetry," Carter explains.  "I want to try to meld the words and the art and make them into one thing, that really support each other, with neither one being a crutch for the other."

Another big inspiration for Carter, Natalia, and Ursa is  Japanese comics, or manga. The series Death Note is a big favorite.  Along with well written characters, they assert, the ethical questions it raises are compelling for these teenagers.

Looking at the young artists' own work, it's easy to see how the dark and serious themes of the manga carry over.

"I think it comes a lot from the things we've been exposed to," Ursa suggests.  "Growing up I found creepy stuff intriguing."

"There are a lot of things that don't get written about," Natalia ventures, "because  people feel that they don't fit the ideals of what's popular or appropriate for kids to see. So I think it's important to  express something that is actually important, that could have a big impact, something that isn't normally expressed in this style of writing or drawing."

While these young comic book artists are, already at thirteen, actively redefining the genre, some of their peers are pretty comfortable with it as it is. One group of boys was almost hidden by the stack of comic books on the table in front of them:  Aquaman, The Incredible Hulk, Justice League, Volume 2.

There were no art supplies anywhere near these readers, who showed up not to draw, but because they "just really love reading."  So why read comics?

"They're just kinda fun to read," one young visitor admitted. "So you don't have to read the nonfiction and the novels all the time.  You get kind of a break from it, I guess."