Cerebral Graffiti: To Access The Mind, Reach For The Pencil 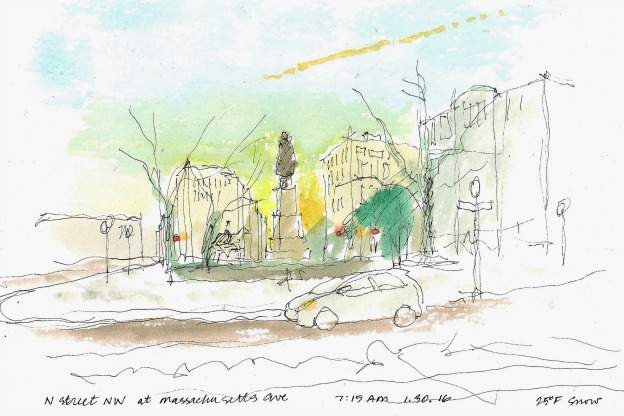 Cognitive scientists, artists, software designers, doctors, and architects from around the country are convening at the Indiana University Center for Art and Design in Columbus, Indiana April 7-10, 2016. During the symposium Drawing and the Brain, they will be discussing the role of freehand drawing in the workings of the human imagination. Participants Robert Goldstone, Chancellor's Professor of Psychological and Brain Sciences/Cognitive Science at IU-Bloomington, and IUCA+D Director and Associate Professor at IU, the architect and artist T. Kelly Wilson, joined me in the studio to preview the forum.

It turns out that in terms of nuance and expressivity, being able to draw is incredibly high bandwidth.

Yaël Ksander: Kelly, I understand that the symposium emerged in response to a similar symposium at Yale, asking, "Is Drawing Dead?" Remind us why one would even propose that question in the first place these days. What are the phenomena in our culture and our educational system that would indicate that drawing might be dead?

Kelly Wilson: By and large in the graduate schools and undergraduate schools of architecture, something like freehand drawing or even manual drafting went the way of the dodo bird, and was replaced by digital formats for drawing and representation. To make room for computation, things had to get pushed off the wagon. And manual drafting is certainly one of those consequences. And freehand drawingwhich is sometimes referred to as sketchingis treated as if it's an ornament to an architect's education.

When the evidence of learning how to see as an artist with drawing and what is gained by this is principally about access to things that words are not very good at dealing with. There are non-verbal meanings that we think with all the time that drawing gives us particular and unique and individual access to.

Rob Goldstone: It turns out that in terms of nuance and expressivity, being able to draw is incredibly high bandwidth. As it stands now, paper and pencil are an exceptional value for us cognitively speaking. We are able to express things in a nuanced way that we are not able to do with other contemporary devices yet.

YK: It seems that in our haste to adopt all of the fabulous tools that technology has given us that drawing, interpreted broadlyhandwriting, calligraphy, sketchingis something that's been left behind. Children are rarely taught penmanship anymore. I think that's fallen out of the curriculum. Is your symposium in some way an attempt to remedy that situation?

KW: It was the thought for this conference that three basic types of people have never discussed this with each other, to our knowledge. The first group are the cognitive scientists and doctors and engineers who think about the way the brain works and are trying to map it; with those who teach drawing; with the next generation of folks writing code for drawing. Complex coordinations between mind, eye, and hand are at the heart of the conversation.

There are non-verbal meanings that we think with all the time that drawing gives us particular and unique and individual access to.

RG: What I think is important about drawing is that it's part of this interactive loop. People might think that the way to be creative as an artist or designer is to get a great idea in your mind, and then in the end you'll transcribe it onto paper as the final product. And that isn't how creativity works at all.

Really it's an interactive loop where you put something down on paper, you inspect what you put down on paper yourself, and that causes you to get new ideas, which causes you to re-craft what you put on paper, perhaps throw it away, start anew, and then there's this engagement of this long loop where the drawing influences how you think, and  influences the next drawing.

KW: With the complex movements of your five fingers, with your wrist, with your elbow, and even your knees get involved in the act of making a drawing, so that your body is implicated in the act of thinking.And the lovely consequence of this is that a set of marks put on the page with ambiguity, and almost without purposelike fooling aroundtends to cause more images and thoughts to burst forth in the mind. Michael Graves called it intrinsic reciprocity between mind and act.

YK: That full integration between the intellectual and the physical.

KW: Most definitely. There's some potential to think that there's hard-wiring between the use of our bodies and how our brains think and imagine and even invent.