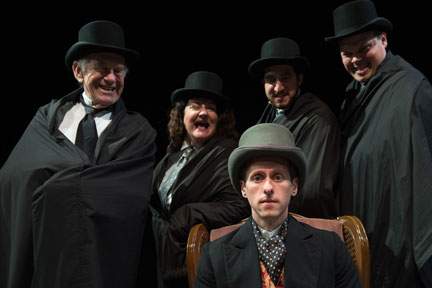 The Crossroads Repertory Theatre in Terre Haute presents Dr. Jekyll and Mr. Hyde adapted by Jeffrey Hatcher.It's an energetically dark companion for their comedy work with Mel Brooks' musical Young Frankenstein. Both inhabit dark fog filled spaces and both are from around the same Victorian period.

There are laughs aplenty from Mel Brooks and not much violence. From Hatcher there are only a couple of laughs and lots of violence. Brook's doctor brings a lifeless body back to life. Hatcher's doctor bloodies the stage with three rather permanently lifeless bodies.

The Strange Case of Dr. Jekyll and Mr. Hyde is a Robert Louis Stevenson's horror classic. It's never been out of print, translated into many languages, staged and filmed over and over. Especially in the upright Victorian times the portrayal of the doctor's drug that would release all inhibitions must have seemed quite attractive.  That all that remained of basic impulses were evil was a frightening though still tantalizing possibility. Come to think of it, the lure of relaxed inhibitions certainly remains, and more and more elaborate chemical and spiritual approaches continue to proliferate.

The Crossroads Reps stage is dominated by scenic designer Kevin Nelson's formidably framed door. It's rotated as the outside and the inside of Dr. Jekyll's home.  Pieces of furniture are busily moved in, out and about for the various scenes. Jen Rock's lighting design combined with the fogging of the space for and over all eerie effect.

Brett John Olson who played the energetic doctor Frankenstein for Brooks' musical plays the deviled Dr. Jekyll for Hatcher's dark drama. His doctor is an upright almost prissy figure of a Victorian gentleman. As a scientist he's come to believe that civilized humanity has reached its pinnacle through suppressing half of its consciousness. And he's fascinated with the possibilities of exploring his own dark side.

In Jeffrey Hatcher's adaption four actors play various characters and at times as many as all four torment Dr. Jekyll as Mr. Hyde. It's sometimes dramatic and sometimes confusing.

Lew Hackleman is a dignified figure as Stevenson's narrator the solicitor Utterson and early on a surprising fright as one of the Hydes. Julie Dixon is most often the doctor's sympathetic and protective housekeeper Ms. Poole, but she is also a prostitute that Hyde mutilates and murders and a farrago as one of Hydes.

Luke Jaconis plays Dr. Jekyll's rival doctor, Sir Danvers Carew. Carew's a nasty celebrity seeking sort, who even sells tickets to dissections. Jaconis is also an upright police inspector and one of those nasty Hydes.  David Harris, the sympathetic monster in Young Frankenstein plays an amiable Scottish physician and the most effectively malevolent of the evil Hydes.

At the center of the gothic tale is the innocent chamber maid Elizabeth Jelkes played with touching grace by Emily Wirkus. She's first attracted to Dr. Jekyll and later to the Jekyll in Mr. Hyde. Its Elizabeth's love for both that in nicely worked out scenes leads to the dramatically staged conclusion of the novella and the play.