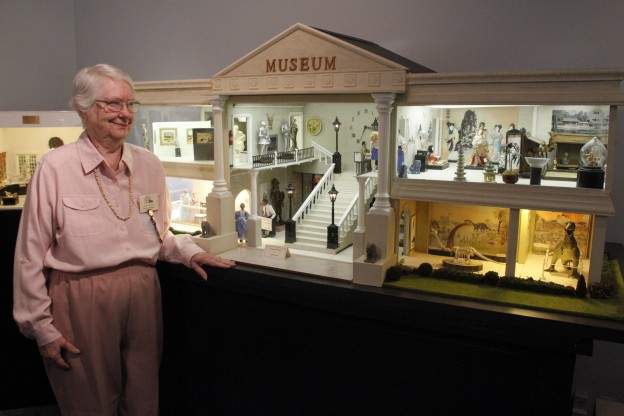 History isn't always pretty. From slavery to the Ku Klux Klan, the Hoosier State has had its own dark chapters. In Carmel, the Museum of Miniature Houses is hosting a bicentennial survey of Hoosier history. Through its miniature homes, objects and collections, the exhibition offers passage to Indiana's past, including its more difficult side.

A New Home For Tiny Houses

Jaysa and Rosie are two Girl Scouts from Carmel. Museum director Elaine Mancini is introducing them to figures in a house. Except these figures could be held in their hands. And that's because they're miniatures.

"The Museum of Miniature Houses is one of only five in the entire country," Mancini asserts. "So we are not unique but we are extremely rare."

The museum opened in 1993. Suzie Moffett, Suzanne Landshof and Nancy Lesh were three miniaturists that worked together to open it. As they grew older, they believed it was important to find somewhere to house their art. So they reached out to five different Indianapolis area miniature clubs, began a nonprofit and established a location in Carmel. Since its opening, it's had more than 84,000 visitors, even some from 14 different countries.

"Showing anything in miniature rather than full size is intriguing, it's magical," Mancini explains. "And that's why we think that this is very special because you have that sort of extra incentive or attraction of having it in miniature."

Hoosier History On A Small Scale

Right now the museum's special attraction is a celebration of Hoosier History, on the occasion of the state's two-hundred year birthday. Four of the museum's rooms contain scenes and objects related to Indiana events and people, from a replica of the Levi Coffin house to an Indianapolis Motor Speedway racer.

Marilyn Schaefer is one of the miniaturists who's contributed her work. She was explaining one of her miniature creations that depicts a museum.

"We have at our disposal a lot of things that relate to the history not only of Indiana but of the whole country," Schaefer explains.

The current exhibition has been recognized with grants from Hamilton County and as a bicentennial legacy project by the state. Visitors get the chance to peer into the Levi Coffin house in Wayne County, for example, an important station on the Underground Railroad.

Many of the museum's visitors include children.

"Miniatures in and of themselves are unique in terms of why they have some appeal for children," Elee Wood said.

Wood is the director of the Museum Studies Program at IUPUI in Indianapolis and has an appointment as a public scholar with the Indianapolis Children's Museum.

"With children they can't see all the nuances they have to start with the really concrete stuff," states Wood. "That's why the big extremes like black and white allows them to move toward understanding what the gray areas are. Things that appeal to children tend to be giant, oversized things or really tiny things."

The house's miniature scale speaks to the children directly. At that point one can introduce more abstract concepts, such as the past.

"One of the things that is really easy to figure out is who I am now in relation to what I am looking at," Wood explains. "And for children that's really important. It can be difficult to understand why something happened in the past. But those are not questions that are difficult for children, they can just be more complex. So we have to break them down in using objects as a way that we can do that.