Dontrell, Who Kissed the Sea: Review 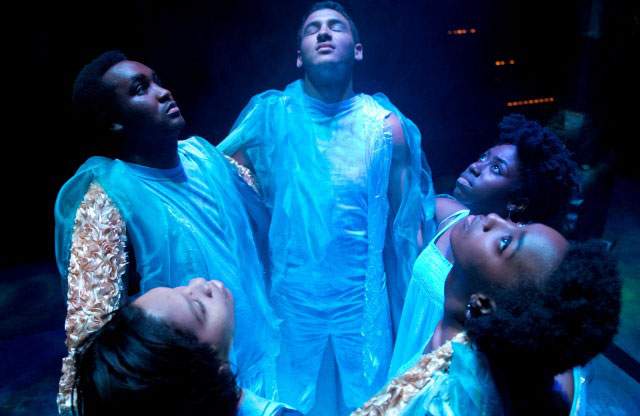 Saturday I had a wonderful evening of theatre in IU's Wells-Metz at the debut of IU MFA candidate Nathan Davis's Dontrell, Who Kissed the Sea in a terrific production directed by Fontaine Syer.

Davis lists his influences as hip hop, classical tragedy and mysticism. The play overlays the classical aspect with a variety of languages and theatre styles.  Director Syer brings out both the natural aspects and the mythic from the talented cast.

Dontrell, Who Kissed the Sea is a story of origins, of generations, memories and dreams. Yusuf Agunbiade was a charming nerdy hero as the Dontrell who dreams of following his suicidal slave ship rebel forebear. Jordan Morning was the rapping street buddy who loves but doesn't understand him. Jasmine Traylor played Dontrell's feisty sister. Jessica Turner was his long suffering, but resolute mother. Ian Martin was his beaten down, but still lion-like father. Patricia Millard was the friend who understands the roots of Dontrell's love for the sea. Elaine Griffin was his swim coach and love interest, a slightly daffy, lovable sometime sooth sayer.

At the center of the story is Dontrell's very personable family and there are a good many very funny moments in scenes with them that drew laughter from the audience.  The drama ranges from moments of realism to scenes of mythic quality with percussive dance and a delightfully creative use of a swirling shiny tarp. Director Syer is frequently very much a dance choreographer as well as a sensitive director for many of the scenes.

Playwright Davis is an eloquent writer in a variety of styles that range from street legal to epic declamation with a bit of almost "Valley girl" in between. References to pop culture abound. Frankly, some of the references and even some of the unique spirit of this wonderful play will not age well. The original script is going to need footnotes soon, but at its core Dontrell, Who Kissed the Sea is a fully realized story with the mythic power of a folktale. It will support variants.

This past weekend,  At First Sight: a repertory of new plays, marked the return of IU's MFA in playwriting program directed by Ken Weitzman to the Department of Theatre and Drama's main stage. Kelly Lusk's (a love story) opened on Friday and Dontrell, Who Kissed the Sea, had it premiere on Saturday.  I'll catch up with (a love story) later this week. The two plays alternate in the Wells Metz Theatre through the week with (a love story) on Tuesday, Thursday and Saturday evenings and Dontrell… on Wednesday and Friday evening and in a Saturday matinee.