Coming Soon, To A Theater (Or An Architecture Tour) Near You 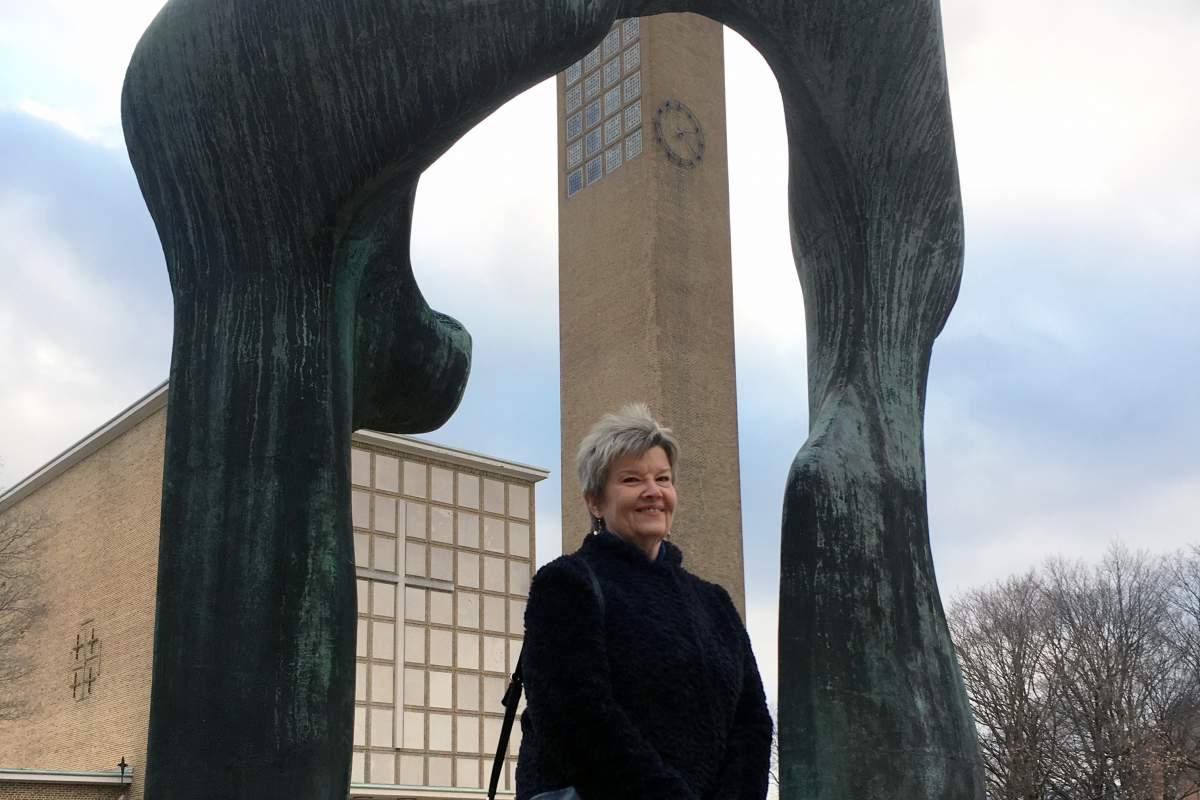 Columbus, Indiana is having a moment in the spotlight, thanks to the new film named after the town. The independent feature Columbus (directed by Kogonada and starring John Cho, Haley Lu Richardson and Parker Posey)  premiered at the Sundance Film Festival on January 22. It's the story of Casey, a young Columbus native with an affinity for the city's architecture, and Jin, the visiting son of an architect. The buildings draw Casey and Jin together, as they embrace their love of design. That's the film version of Columbus, Indiana. The challenge for one of the town's real life tour guides is to make the city's architecture as fascinating as it is to Casey and Jin.

An Eye For Design

I met Donna Sasse in front of the Cleo Rogers Memorial Library in Columbus on an absolute frigid winter afternoon. I was incredibly uncomfortable, but Donna was in the zone. She was like a player piano scrolling through the greeting she gives to guests on the architecture tour.

Donna has the type of story you'd expect from a Columbus, Indiana native. It starts when she was 5 years old, in 1954, and her mother took her to see the new Irwin Union Bank designed by Eero Saarinen.

"I still remember the effect that this building had on me," she says. "I realized, this is a light, airy space and there's no walls. It's so open. I could compare this to the bank my grandparents went to because when you went in there, the tellers were behind golden bars and it looked like a fortress. I knew as a young child this was a very special place."

Sasse left Columbus to study hospitality at Purdue University. She lived in Detroit for a bit and then moved back to her hometown in 1974. The first thing she did upon returning to Columbus was sign up for the tour guide training.

"When I got off of the bus after taking the tour, during the training, I could not believe that I was in my hometown," she says. Sasse has been giving tours ever since for 42 years.

City tours unofficially began in about 1969. The story goes that people were hearing about Columbus' architecture and they were just kind of showing up to check it out. So, a group of volunteers with the Chamber of Commerce started conducting tours. They wrote their own scripts and still do today, so no two tours are the same.

In the last few years, new initiatives have developed out of the city's illustrious design heritage. The IU Center for Art and Design opened its doors in downtown Columbus in 2011. Founded in 2015, Landmark Columbus transcends historic preservation to foster new design in dialogue with existing landmarks through its Miller Prize competition. Even the city's younger residents are getting into the act teams of high school designers are competing for the opportunity to create a temporary installation on the corner of Washington and 7th Streets.

On her tours, Sasse interacts with high school students as well. They've provided some insight for her into the way Columbus natives perceive their surroundings.

"On this particular (tour), we were walking through Friendship Alley, and one of the North High School students said, ‘I had no idea this alley was here.' It's almost like how could you not know that this is here?" she says.

While others are expanding the city's identity as an aesthetic standard-bearer, Sasse is focusing her efforts on sharing knowledge about the existing buildings. She was a child when the landmarks were new, but after more than a half-century, their luster has dimmed for many Columbus natives.

"It's very easy when you grow up in a community to just assume every other city is like this; and when you are out on your own, then you see the differences between towns," she says.

Sasse's dream is for all Columbus natives to take the architecture tour. She thinks it just might rekindle the same sense of awe about the city's built landscape in them that she notices in new residents.