Don Giovanni: Some Smoke And Lots Of Mirrors 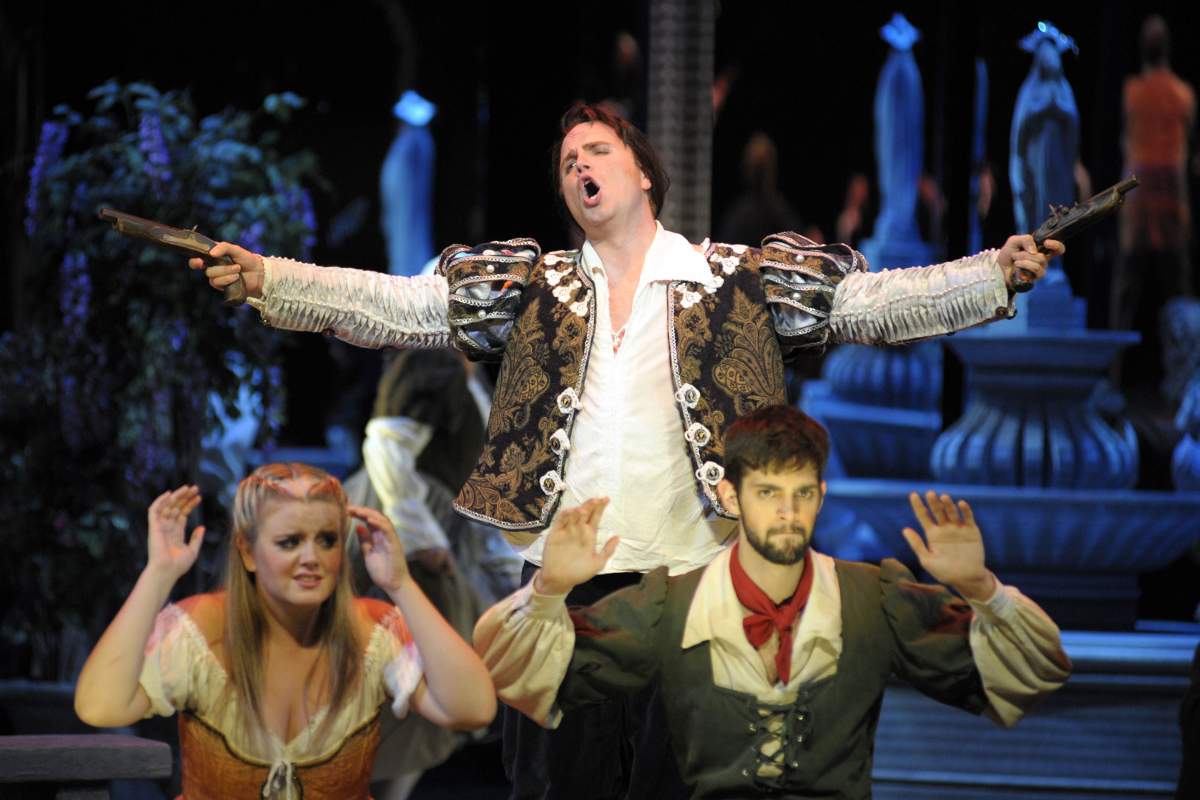 Indiana University Opera's season opening Don Giovanni‘s action began as conductor Arthur Fagen led the orchestra in the overture. One, two, three…perhaps as many as six reflections of  the daring Nathaniel Olson as Don Giovanni and conflicted Riley Svatos as Donna Anna were engaged in a yes-no-maybe,  bedroom struggle. In James Marvel's staging,  there were  more yeses than nos.

As the scripted drama commenced, a single Don and Donna struggled for possession of an apparently valuable strip of red cloth. They were interrupted by the Donna's father, the Commendatore sung by Adam Kroes. After a brief struggle with the Don, the father succumbed while being forced to watch his own dying face in a hand mirror. Later the Don admired himself in the same mirror. The mirrored back wall of C. David Higgins set amplified some of the crowd scenes, but the mirror theme was not pursued.

Donna Anna's fiancé Don Octavio, the resolute Michael Porter, arrived at the murder scene. Whatever guilty mixed feelings Donna Anna may have had about Don Giovanni were overcome by her anger at the murder of her father. They swore the vengeance that would drive the drama.

Next on the scene was the dignified Emily Holsclaw as Donna Elvira. Donna Anna had only an evening flirtation with Don Giovanni, but Donna Elvira claims three days and pro forma marriage. In what has to be one of opera's most ironic scenes, Don Giovanni's much put upon servant Leporello, the flexible Adam Watson, seeks to comfort her with the fact that statistically she is less than 1/2000th of the totality of the Don's activities in the arena of amour.

Much of the humor of the evening came with Leporello. Not all of the gags worked, but I've never heard as much laughter for a production of Don Giovanni at IU as I did Saturday night.

Donna Elvira does get a bit of revenge by thwarting Don Giovanni's seduction of the country girl, Zerlina, the charming Jessica Beebe. Zerlina, in parallel with Donna Anna has a fiancé Masetto, the plucky Jeremy Johnson. It's adds an interesting depth to the drama that although Elvira is the most wronged of the Don's ladies, she continues right up to the end to be ready to sympathize with him.

As the finale approached Donna Anna, Don Octavio, Donna Elvira and Masetto had managed to thwart Don Giovanni, but they've ultimately failed to bring him to account. It took a smoky appearance by the ghostly equestrian statue of the murdered Commendatore with a summoning of fiends drag the still unrepentant Don down to the nether reaches.

The finale sextet poked the moral of "the rake punished" and wraps up the action. Donna Anna and Don Octavio will wed following a year of mourning for her father. Donna Elvira will enter a convent. Masetto and Zerlina will go home and the shaken Leporello will seek a badly needed drink and a better master.