A Don Giovanni For Our Time 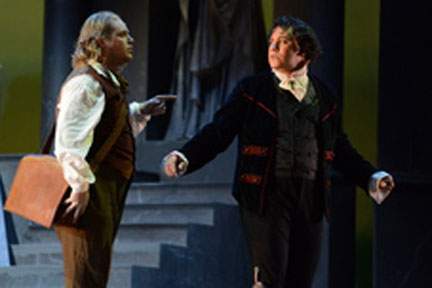 The IU Opera Theatre opens their 2017-2018 season with Mozart's Don Giovanni. I've been following the wily Don for years, but this time it feels different.

When Mozart and his librettist Lorenzo da Ponte were working on the opera, they consulted none other than the famous lover Casanova. There are suggestions that he may have been at the premiere in Prague in 1787 and that members of the audience thought the Don was modeled on Casanova's romantic exploits. At least in his memoirs Casanova is as wily as the Don but a good bit more gentlemanly.

Don Giovanni has fascinated audiences for centuries. In thoughtful program notes Benjamin Fowler describes the Don's place as a trickster in Carl Jung's archetypes. Jung further identified the Don's character as one unconsciously seeking the mother.  Freud talks about the fixation in his essay on love and even Jane Austen goes on record as finding him a "most interesting character, composed of cruelty and lust."

The first formal scene of the opera at the MAC has the Don, Bruno Sandes escaping from the bedroom of Donna Anna, Kaitlyn Johnson with the screaming lady in pursuit and calling for aid. Her Commendatore father, Peter Volpe comes, duels with the Don and is killed. In many productions, the killing is accidental with the Don even chagrined at the father's death. In the IU production, the disarmed Don pulls a sneak knife to stab the Commendatore and he later coldly cuts the old man's  throat. It's a darkly shocking moment that I haven't fully recovered from.

By the way, Director David Lefkowich further strews a bit of confusion with a tableaux before the opera proper begins. A perhaps sexually satisfied Donna Anna lies in repose while the wide awake Don gathers his clothes to exit. When the first scene begins with her cries we're left to momentarily wonder if perhaps Donna Anna's rage was not at being attacked, but being abandoned.

The opera continues with the arrival of  one of the Don's conquests Donna Elvira, Shayna Jones. The Don, as often happens, takes off leaving his much put upon servant Leporello, Glen Hall to comfort the lady. His comforting consists of a reading from the catalog of the Don's conquests. I'm not sure why anyone thinks that telling Donna Elvira that she's only one of one thousand and three Spanish ladies should make her happy. There were laughs as Leporello got into the generalities, with the Don seeking the comfort of thin ones in the summer and plump ones in the winter, but I still kept hearing the words sexual assault and serial rape in my mind.

Donna Anna and her intended, Don Ottavio, Leo Williams take Donna Elvira under their collective wings and prepare to seek justice and revenge in what appear to be rather stiffly ineffective approaches. Meanwhile the Don has fixed upon the just to be married country girl Zerlina, Alyssa Dessoye and seeks to separate her from her intended, Masetto, Joey LaPlant. Zerlina and several others naively assume that as a Don, Don Giovanni will act in an upright and ethical manner. That he most assuredly doesn't is part of Mozart and DaPonte's sly critique of the noblesse oblige of the age.

The opera is far from being gloomy and especially with the Don's often complaining servant there were lighter scenes.  Glen Hall has a good feel for his character's comedy. The funniest moments of the IU production were of his Leporello dressed as the Don and aping his motions under Donna Elvira's window in broad parody of the balcony scene from Cyrano de Bergerac.

In Don Giovanni's famous finale, the audacious Don has invited the statue of the Commendatore to dinner and he comes. Usually he appears as a statue. The last time the Commendatore appeared on the IU stage it was as a quite formal grey stone figure. The costume is on display in the Musical Arts Center's lobby. This time the formidable new faculty member Peter Volpe  appeared as a bloody figure looking like Banquo's ghost from Macbeth. Dark figures come from backstage to grasp the Don, additional singers chant from the sides, flames shoot from an opening in the stage.  It's quite a dramatic picture as the still defiant Don is cast down into fires below and a sextet consisting of Donna Anna, Don Ottavio, Donna Elvira, Zerlina, Masetto and the cowering Leporello sing the moral of the tale.

The IU Opera Theatre's production of Mozart's Don Giovanni continues with final performances on Friday and Saturday, September 22 and 23 at 7:30 in the Musical Arts Center

You can find this and other interviews and reviews at WFIU dot ORG/ Arts. At the theatre for you, I'm George Walker