#DirectedByWomen Is A Global Party, And You're Invited 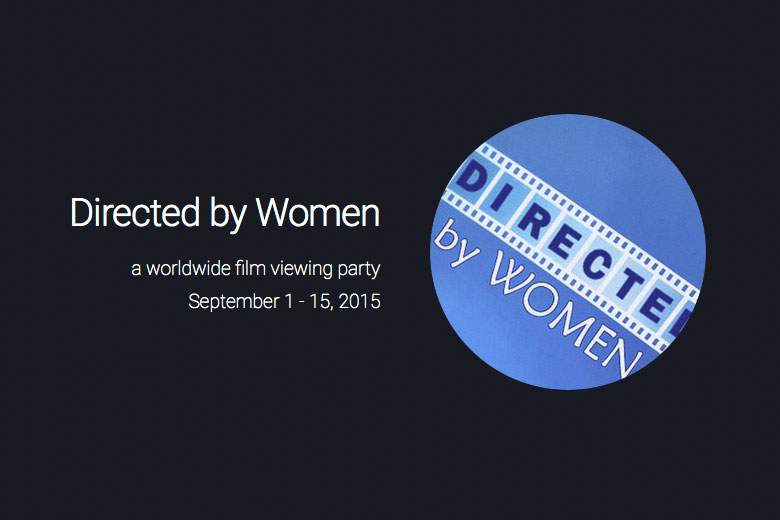 Vladimira Dragnea knows the movie well. She watched it a bunch of times when she was growing up in Czechoslovakia in the â€˜80s.

"It's called S tebou mÄ› bavÃ­ svÄ›t, which means With You The World Is More Fun," and it's a classic, she says. It's directed by Marie PoledÅˆÃ¡kovÃ¡, from 1982. She says the plot is something like Three Men And A Baby.

"The three husbands plan their only-man trip, and then the wives get together and they're like, 'Okay, you are going to go but only if you take kids with you,'" she says. "They send them off to some vacation in the mountains in the winter, and it's kind of fun."

She decided to dust off her copy this week and screen it for some friends at her house as part of the global viewing party Directed By Women.

Barbara Ann O'Leary has RSVP'd to Dragnea's party. O'Leary is the mastermind behind Directed By Women. The seed for the idea was planted way back in May 2013.

"I wanted to bring some balance into my film viewing and conscious awareness of whose work I was receiving," she says. She challenged herself to watch two movies every day for one year one directed by a man and one directed by a woman. She made herself a list of female directors to keep track of whose work she's seen and what films she should seek out next. By the end of the twelve months, the list was in the thousands.

"I realized that there are so many women making films, I cannot ever possibly watch them all myself, so let's have a party!"

She spent 15 months spreading the word on social media. It was an open invitation for anyone around the world to participate in anyway they liked September 1-15.

There's Dragnea and her small house party in Bloomington. A bike shop in Portland, Maine is screening women-directed shorts. There are nine different events happening around London, England.

We're not doing this because there aren't women directors out there and we need to gather the few of them together and present them to you as a gift. We want to say, they're out there.

And then there's the IU Cinema, that's programming the first two weeks of September with films by women.

As we were struggling to find a woman director who could anchor our series or visit, I was thinking, â€˜Well, if all else fails, what we should do is a series of films that people would say, â€˜A woman directed that?'"

Brittany Friesner is the associate director of the IU Cinema. They're screening some popular films you might be surprised to know were directed by women like Penelope Spheeris' Wayne's World.

But if you're truly interested in female filmmakers, you have to venture off the beaten path, because Hollywood is still very much a boys' club.

"I think Colin Trevorrow, who directed Jurassic World, is getting a lot of heat," says Friesner.

Trevorrow had one feature film under his belt when he was pegged to direct Jurassic World and now Star Wars: Episode IX. "Steven Speilberg has the power to say 'I'm giving you Jurassic World' and make a decision and have it to stick, whereas there aren't really a lot of women directors in Hollywood of that stature. So, I think that's where you see the inequality," she says.

But it's a different story when it comes to shorts, experimental films and educational movies. That's where women filmmakers thrive.

"We're not doing this because there aren't women directors out there and we need to gather the few of them together and present them to you as a gift. We want to say, they're out there. You might have to dig for them a little more than you do male-directed films, but they're out there."

Thanks to O'Leary's work, you actually won't have to dig much at all. On her website, you'll see the list she started way back in May 2013. Right now, she's compiled almost 6,500 movies directed by women.

Just like Dragnea, O'Leary is taking this as an opportunity to reconnect with one of favorite movies of all time.

Directed by Kathryn Bigelow. Who knew?