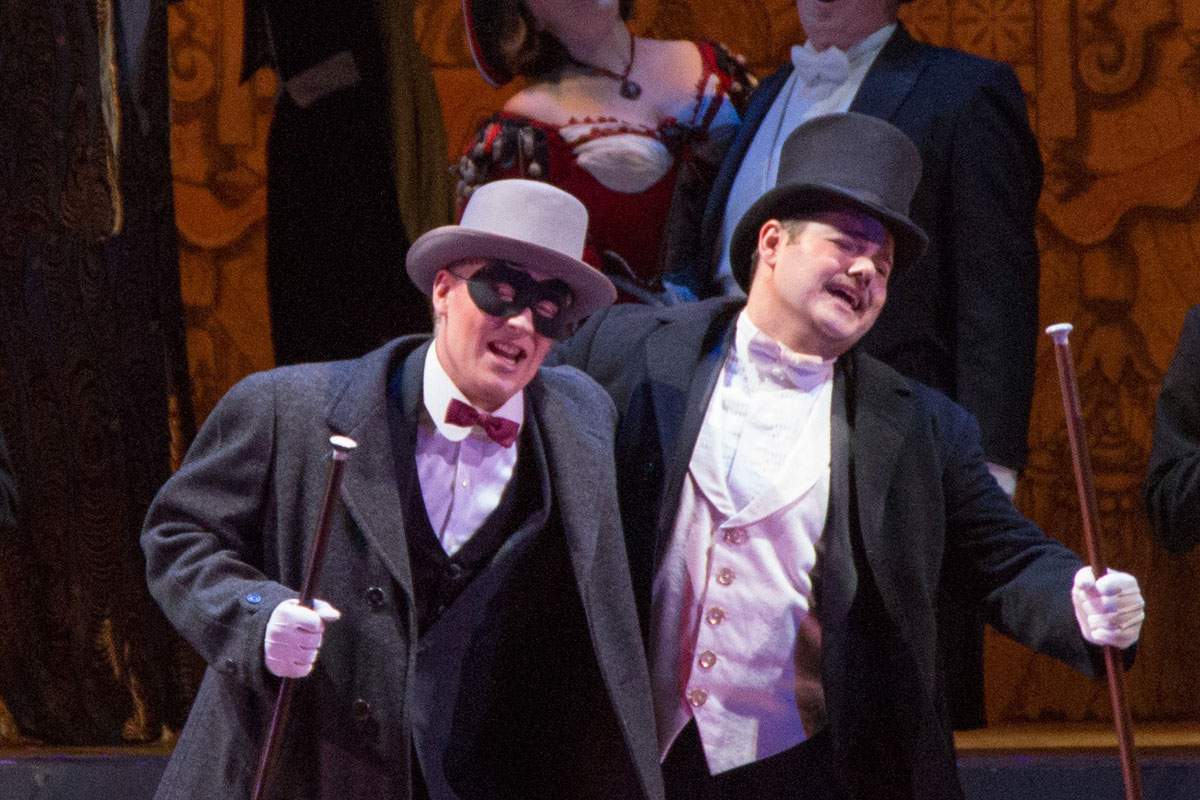 Saturday night's offering at IU Opera Theater began on a serious note as we were asked to rise as the orchestra played the French National Anthem in a gesture of solidarity following the horrible events in Paris. Frankly it took a moment to take a deep breath and prepare for the curtain's rising on a lovely set and the frothy overture that followed.

Die Fledermaus is a comedy that boasts German and French parentage and it's Johann Strauss's most popular work from the "Golden Age "of Viennese operetta in the 1870s. On stage the action is easy to follow but IU's own veteran conductor Arthur Fagen begged me not to ask him to explain the plot, so I'm not going to try.

Suffice to say Dr. Falke is seeking revenge for a prank that Eisenstein played on him. He invites Eisenstein to come in disguise with him to a masked ball. Meanwhile, he secretly invites Eisenstein's wife Rosalinda, and her maid Adele. Falke's trap snaps at the end of the ball when Eisenstein discovers that he's secretly been wooing his own wife. In a nice little side play Adele has convinced people that she's not a maid but an aspiring actress. It all ends happily.

As the curtain on Die Fledermaus went up on the production there was applause for the lovely Imperial Hotel lobby setting of designer Allen Moyer. All during the overture there were interesting comings and goings, a whole series of little stories supported by the Bell Hops, Robert Gerold, Deiran Manning, Heeseung Chae and Bradley Bickhardt.

There were strong vocal and orchestra moments in the production and some glitches as well. More than one aria and scene ended without the audience knowing that it was over. For much of the ball scene, costume designer Candice Donnelly's colorfully costumed guests just stood around. Stage director Robin Guarino's decision to substitute a detention cell in the hotel for the usual comical jail scene cut the production time and saved a set, but seemed to jam the final sorting out. The mix of mostly easily heard sung German with supertitles and often a bit muffled spoken English without them was a bit of a problem.

Saturday night, Ann Marie Theis was a strong singing Rosalinda. Andres Acosta sang nicely as her old flame tenor Alfred. Theis is taller and Acosta is shorter, a pairing that the director exploited for comic effect. Bille Bruley was very effective as the bamboozled roué Eisenstein. Edward Graves has a small voice for the role of Falke in the big hall, but used it carefully. Rebekah Howell got to show off nicely in the acting and the coloratura passages of Adele. Kaitlyn McGonigle graced the trousers of the ball host, bored Prince Orlofsky. Ross Coughanour was nicely authorative as the Imperial Hotel manager and a bit silly for the party.

As I finish this piece up, it's Monday morning and I've still got the champagne bubbles and a couple of those delightful Strauss tunes floating around in my head.

Johann Strauss's Die Fledermaus at IU Opera Theatre wraps up its production with performances Thursday and Friday, November 19th and 20th at 7:30.