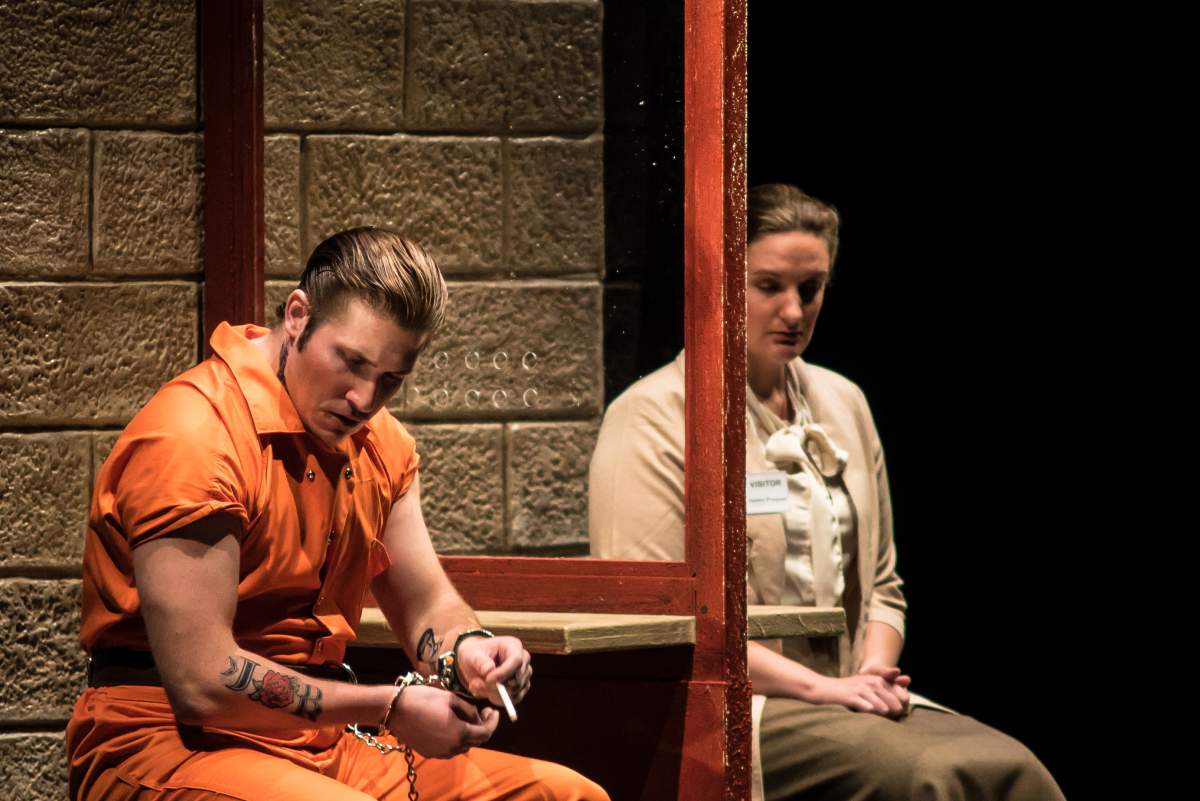 Dead Man Walking at IU Opera Theater is a potent intellectual and emotional experience.  It's based on Sister Helen Prejean's counseling with a death row inmate in Louisiana's Angola Prison.

Joseph De Rocher, the convict, sung strongly on Saturday by Eric Smedsrud is an unrepentant killer in the deaths of a pair of high school lovers. Sarah Ballman was a complex wonder as Sister Helen. She's a nun with a solid commitment to mercy who can't really understand the murder that Joe committed nor the justice system that will take his life. It's her struggle to understand and to bring the Joseph De Rocher to admit his guilt and offer an apology that forms the arc of the drama.

It's a very rough arc. Eddy Mony as the prison chaplin is contemptuous of her efforts. Jeremy Gussin as the warden is more careful, but equally wary. Joseph De Rocher is guarded and even contemptuous.

At the parole board's hearing the families of the murdered girl and boy angrily ask Sister Helen why she comes for the criminal and not the victims.  The girl's father Johann Schram Reed is very bitter and the boy's mother Courtney Jameson is eloquent as she tells the Sister that she can't know what it is to lose a child.

At the parole board hearing Kelsea Webb sings movingly as the mother of Joseph De Rocher, but the parole is denied. The act ends as the overwhelmed Sister Helen has a vision of the chaos of the demands of all the opera's characters and faints.

In the second act of Dead Man Walking Sister Helen has become more and more possessed by the case. Her sleep is fitful and interrupted with visions of the teen victims. Leeza Yorke as her companion Sister Rose both comforts, supports and chastens her in a lovely duet.

On the evening of the execution Sister Helen, De Rocher, his mother and the two brothers are together. The convict attempts to tell his mother of his guilt, but in a very moving aria she will have none of it and  she reminisces about his childhood.  Likewise Sister Helen's meeting with the victims' parents also fails to bring closure…only ending with a guarded agreement to views themselves as "fellow victims" of the killer.

As death approaches something finally happens and De Rocher admits his guilt and describes the murder to Sister Helen. To his surprise she offers him forgiveness with the "face of love." As the clinically conducted execution proceeds the convict apologizes to the parents and hopes that his death may bring them some comfort.  In the last moments he and Sister Helen share their love.

Dead Man Walking is a potent piece of music drama. As I'm writing this I'm tearing up again.  But, I'm also remembering some of the warmth and even humor.  Benjamin Seiwert drew laughs as the motorcycle cop who pulls Sister Helen over and lets her go as he's never ticketed a nun before. Sister Rose's firm refusal to join Helen for a rosary at four in the morning was worth a chuckle. And then, how can one forget the convict and Sister Helen harmonizing on the finale of an Elvis Pressley tune.

You can find this review and a conversation that I had with Sister Helen Prejean at WFIU.ORG/Arts