Never Say Never, When You're Dealing With Captain Hook 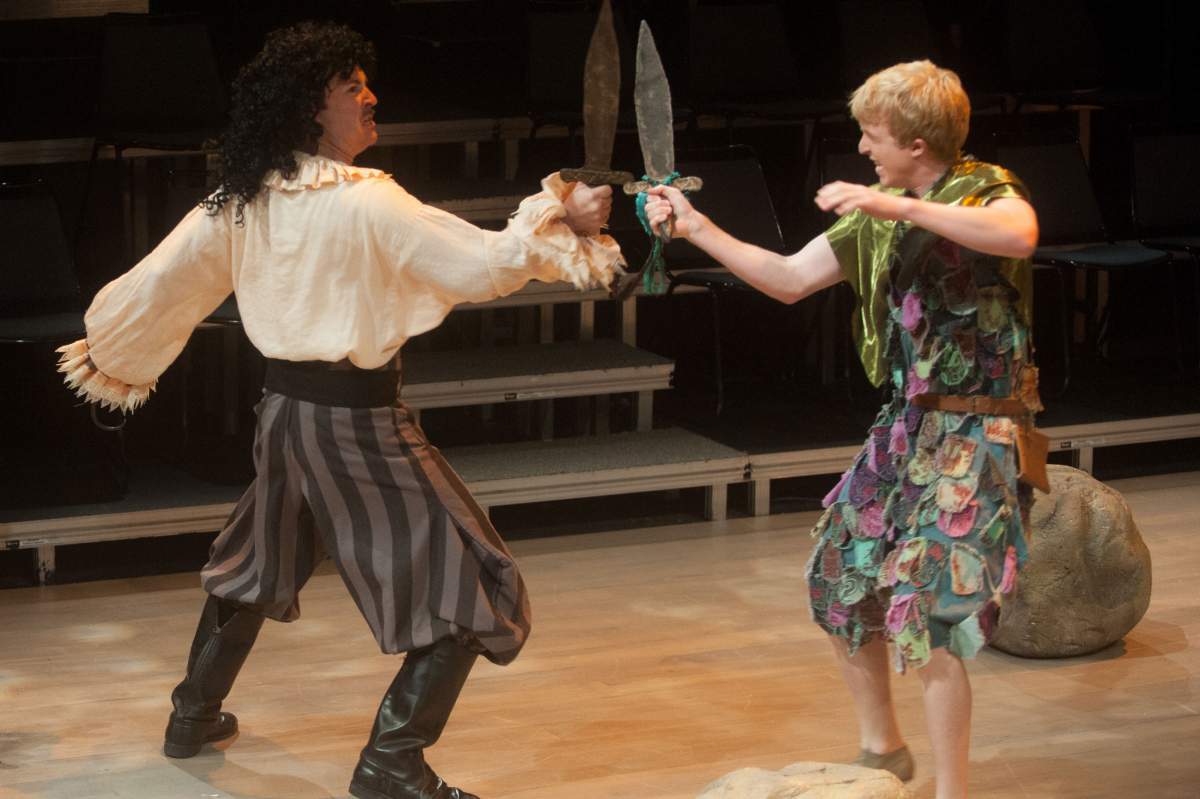 Return of Neverland at ISU's Crossroads Repertory Theatre in Terre Haute is a musical sequel to James Barrie's classic Peter and Wendy. The grown up Wendy, grim-faced Carolyn Conover, is married to one of the former lost boys, the resolute Jason Bowen, and they have a teen-aged daughter, Jane played by the wide eyed Clara Butts. The mother and father have tried to put Neverland with its adventures and dangers out of their minds. But Jane has been having some strange dreams.  And when she pokes around in the attic, she finds the lantern that summons Peter, the delightful Jonathan Wachala.

Meanwhile, back in Neverland, Captain Hook, a much more flamboyant Jason Bowen, and the faithful Smee, Brandon Wentz, are bargaining with an evil mermaid, now a wickedly-smiling Carolyn Conover, for a spell take away Peter's gift of eternal youth. Their machinations involve clever gymnastic fairy tossing and a variety of kissing experiences. Through a ruse, the Captain kisses Jane. He thinks she is Wendy, but she isn't, so the spell to age Peter doesn't work.  Finally, the Captain does get his lips on Wendy. His plan works. Peter does grow old.  But in a remarkably clever plot twist involving Crossroads' veteran Lew Hackleman, that I didn't and you won't see coming, everything ends in a happy fashion.

Highlights of the production for me included a couple of clever patter songs for  Bowen as the Captain, a hilariously funny scene when Wentz as Smee struggles  to move a rock, and the delightful boyish joy that Wachala brings to Peter.

Return of Neverland was the winning script in a playwriting contest among Indiana State University students and graduates. ISU grad Andrew Park collaborated with veteran composer Scott Lamps to create the musical. The neatly staged production is directed by Crossroads Artistic Director Arthur Feinsod. Eye catching costumes are by Marc Borders; secure musical direction and preparation are by Mark Carlisle; inventive choreography is by Teresa McCullough. Samantha Hayes, Will Rupert and Joe Wagner were the graceful stage managing fairies. Kurt Perry was the never dull or routine pianist.