Dave Stryker: WFIU's Artist Of The Month for April 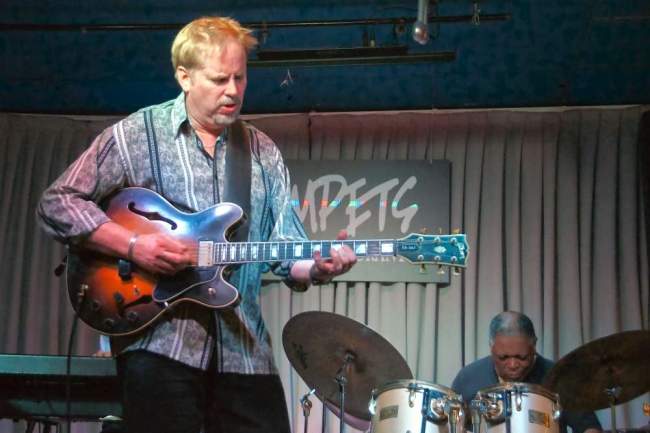 WFIU's Featured Artist for the month of April is jazz guitarist, composer and educator Dave Stryker.

Born in Omaha, Nebraska, Dave Stryker moved to New York City in 1980 where he was ushered into the jazz scene by some of the genre's most legendary performers. Stryker had his first big break in 1984 when he was asked to tour with late Hammond B-3 organist Brother Jack McDuff. Two years later he met saxophonist Stanley Turrentine and spent the next decade performing at major festivals, concert halls and clubs throughout the world as part of Turrentine's quintet.

Over the years Stryker has performed alongside such legendary jazz and blues artists as Dizzy Gillespie, Freddie Hubbard, Rick Margitza, Joey DeFrancesco, Randy Brecker, Kevin Mahogany, Victor Lewis, Steve Slagle and many others. He has recorded and published over 130 of his own compositions and has released over twenty albums as a band leader and over fifty as a sideman.

Described by Village Voice music critic Gary Giddins as "one of the most distinctive guitarists to come along in recent years," Stryker has been listed as a Rising Star for the last five years in the Downbeat Critics Poll. His 2011 album Blue Strike made many Best of 2011 lists, including those by WBGO Jazz Radio in Newark, NJ and New England Public Radio.

Stryker's currently performs with The Stryker/Slagle Band, The Dave Stryker Organ Trio, and The Blue to the Bone Band. He has recently performed at Dizzy's Club Coca Cola at Jazz at Lincoln Center, the Monterey Jazz Festival, The Blue Note in Las Vegas, The Jazz Bakery in LA, and Carnegie Hall and has given tours throughout Europe, Japan, Brazil and Poland.

On Stryker's most recent album Eight Track (2014), the guitarist puts his own spin on classic 1970s hits including Curtis Mayfield's Pusherman/Superfly, The Spinners' I'll Be Around, Pink Floyd's Money and the song Aquarius from the Broadway musical Hair. The album features members of Stryker's organ trio along with special guest Stefon Harris on vibraphone.

Dedicated to fostering the next generation of jazz artists, Stryker is currently an adjunct lecturer in jazz guitar at the Indiana University Jacobs School of Music. He serves as an adjunct professor at The Cali School for the Arts at Montclair State University and regularly teaches at the Aebersold Summer Jazz Workshop, the Litchfield Jazz Fest Camp and The Veneto/New School Workshop in Italy.

WFIU will feature performances by Dave Stryker in our jazz music programming throughout the month of April.