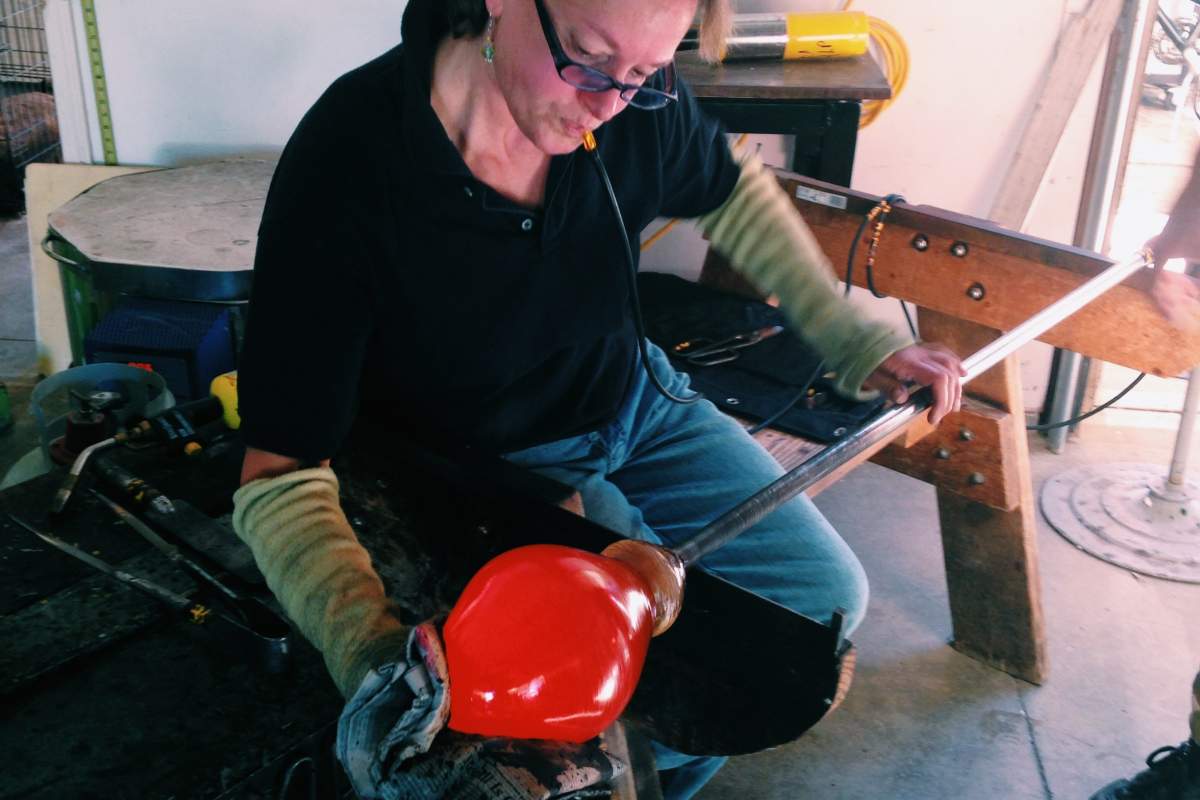 Art and danger are two things that don't necessarily go hand in hand, but inside the hot shop of Lisa Pelo's "Hot Blown Glass," danger is all part of the process.

During the fast-paced, loud, and very hot process of creating a nearly two-foot tall decorative glass vessel, Pelo's assistant Clayton Benefiel's pants started to smoke. He laughed it off as if it were all in a day's work.

Pelo will be giving glass-blowing demonstrations and workshops on how to make glass paperweights at the "Meltdown" event sponsored by the Columbus Area Arts Council. The event is part of the fifth annual Columbus ArtFEST, which hits the streets of Columbus on Saturday and Sunday, August 23rd and 24th. The ArtFEST will feature the designs of over 100 local, regional, and national artists.

Inside Pelo's hot shop, pounds of molten glass sit in the furnace. That sits next to an intimidating piece of equipment affectionately called the "glory hole," an enormous oven where the vase is heated and reheated in order to be shaped.

"They're both at easily 2100 degrees Fahrenheit," said Pelo. The furnace has to run constantly because, according to Pelo, heating up the glass to the correct temperature is a process that could take several hours or even days.

The glass-blowing process was very involved. First, there's the "gather," which includes adding the molten glass in the furnace to the end of a blowpipe, a five-foot long steel tube. This process happens several times, and the vessel grows in size each time

The piece is constantly turning so as not to fall off the end of the blowpipe. It's being shaped with various tools, including a marver (a large steel-topped table, used for shaping and cooling), various pliers and steel tongs, cork boards, and wet newspaper.

It's also being decorated with "frit," small glass flakes, to give the final piece a decorative sparkle. During this entire process, a bubble was being blown inside the vessel using a long straw attached to the end of the blowpipe.

Pelo said, "When you work with glass, it looks to be very boring stuff, but you gotta be very precise at it."

The entire process of putting this vessel together took about 45 minutes.

The turning process, which took up the majority of the process, is deceptively difficult. "Sometimes when you watch skilled glassblowers work, it looks really, really easy. But it's not. It's very difficult," Benefiel said.

The last several minutes were fast-paced, and during this time, many of the big artistic decisions were made about the final shape of the piece.

For Pelo, having to make artistic decisions on the fly is the most exciting part of her job.

"When it gets to these points, when we were at the end of that bigger piece, the decision is right now," Pelo said. "And I like making the decision right now."