Spirited and Sad, Dancing at Lughnasa 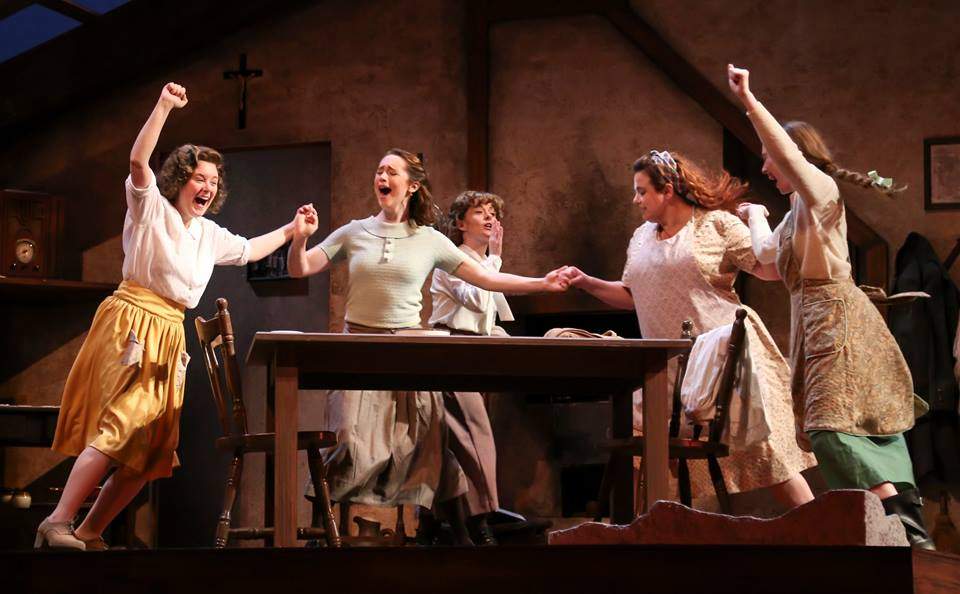 Dancing at Lughnasa at IU's Ruth N. Halls Theatre is  Brian Friel's Tony Award winning richly sad story of the lives of five Mundy sisters, the philandering boyfriend of one, his abandoned son and the family's uncle returned from going native as a missionary in Uganda.

Although Friel's first success Philadelphia, Here I Come!  is about an Irishman coming to America, many of his plays are set in Ireland and thirteen of them in Dancing at Lughnasa's  small town of Ballybeg. It's a place similar to the town of his own upbringing and he knows it well.

Chris Handley plays Michael Evans, the play's thoughtfully charming narrator. He's on stage as a grown man looking back from the vantage of twenty some years and the off stage voice of the family's love child of seven.

The Mundy sisters are a mixed lot. The wage earning school teacher Kate is the bossy Ashley Dillard. Kate is the family breadwinner and the most concerned about rightness and propriety. Some of the show's funniest moments come when a frustrated Kate get a bit extra human. Meaghan Deiter is the energy center of the family, quite ready for songs and pranks. She's always asking the young Michael riddles and usually answering them before he can.

Chris Mundy is young Michael's mother. As Tess Cunningham plays her, Chris seems the most comfortable about herself of the sisters. She doesn't seem to bear a grudge against the man who fathered Michael and left, nor is she willing to marry him when he comes by and proposes from time to time.

Agnes, Emily Sullivan, is the family's cook, bed maker and house cleaner. She's a quiet soul mostly in her corner working on knitting gloves. Kathleen Cox plays the beautiful Rose.  Like Agnes, she's doing piecework making gloves and in the play's setting of 1936, she'd be called "slow." When Rose goes missing from Bilberry berry picking for a romantic rendezvous, all are aroused and when she returns bursting into tears, it's a heart rending moment.

Jason Craig West is Gerry, the graceful philandering father of Michael. From time to time he shows up with stories of a new job with "the next best thing," and promises for Michael. Neither "the next best thing" nor the promises are ever realized, but West makes Gerry a guy the family and the audience just can't hate.

The Lughnasa celebration of Dancing at Lughnasa is a Gaelic harvest festival with pagan roots and a mixed tradition. It's sometimes called Bilberry Sunday. Sister Kate is especially concerned about those roots and Maggie and the others lark about around the table and think of attending the festive dance. Vigorous Irish dancing with the girls and graceful ballroom turns with Gerry are very much a part of the atmosphere of the play. The conflict of pagan and Christin customs is further explored with the return of Father Jack.

Mathew Murry plays the family's uncle, the malaria ridden Father Jack. Jack went out to Uganda, briefly served with the British in 1917 and then pretty much came to embrace the native culture and religious ceremonies. His long description of a days long festival is fascinating as he grows more and more caught up in it. Then he suggests that the whole family would be better off If one of the sisters were a man's primary wife and the others secondary spouses all living together, a model he describes as working well.

Despite some high spirited moments, especially dancing to the music from the new radio and some family high jinx, Dancing at Lughnasa is a tragic tale. Although he dies within a year, Father Jack's estrangement from the church puts a strain on Kate's position with the town's school. A new knitting plant opens taking the piecework hand knitting out of Agnes and Rose's hands. The family breaks apart.

Chris Handley as the mature Michael has the final rueful summing up and though he tries to emphasize his memory of a kind of softer glaze, a brightness and grace, we're left with a dramatic grim picture.

Dale McFadden directs. Guest artist Nira Jean Pullin contributed some of the dance choreography. The cut away cottage of the scenic design is by Ryan P. Miller. Varied costumes are by Emmie Phelps.