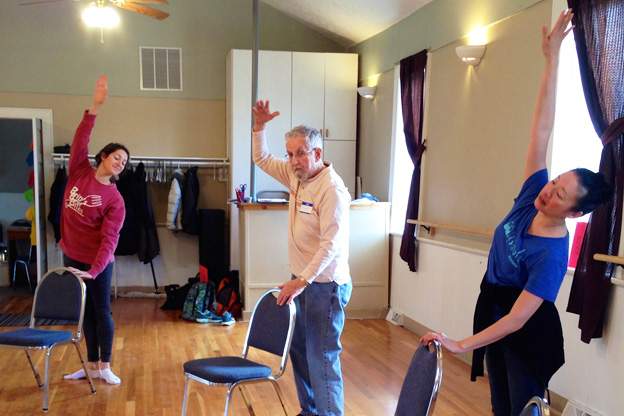 Back in 2003, Weezie Smith began noticing changes in her body. What began as a slight tremor in her left hand soon became more involved until she was ultimately diagnosed with Parkinson's disease, a degenerative brain disease that causes locking and tremors in the body.

As the disease progressed, Smith lost some control over her facial movements, and tasks as ordinary as walking became increasingly difficult.

"I'll freeze when I'm going to walk and change directions and start back again," she says. "If I'm not careful about that, I'll stumble and fall because my mind is already in the other direction but my body is stopping. That can be frustrating."

But the frustrations of the disease weren't enough to keep Smith from battling the symptoms. She took her prescribed medication, a drug called Levodopa that was the first medication proven effective in treating chronic neurodegenerative diseases, and enrolled in exercise classes at the local YMCA. The medicine and exercise successfully curbed the effects of the disease, and Smith regained some control over her movements.

A few years later, Smith was watching the PBS Newshour when she saw a story about Dance for Parkinson's, a dance program starting in Brooklyn, New York, designed to help people cope with their Parkinson's symptoms.

"I was very taken by it and I thought it would be neat if we could eventually get one to start here," Smith says.

And eventually, she did.

Smith, a lifelong musician who taught recorder at the Indiana University Jacobs School of Music, and her husband David worked with Liz Shea of IU's School of Public and Environmental Affairs to secure the Windfall Dance Studio, find instructors from the Jacobs School of Music and begin the Bloomington chapter of Dance for Parkinson's.

Indiana University dance professor Roberta Wong began leading the classes and mentioned the opportunity to her students. Dance major Alyssa Condotti got involved and now teaches the class every other week.

"From the moment that Roberta mentioned it in class, I knew this was a way that I could use my dance degree and my talents to help others," Condotti says.

Condotti plans to use her dance degree to pursue a career in adaptive dance or dance for special populations.

"It's just a really incredible opportunity to see different movement and new movement from bodies that haven't taken class for all of their lives," she says. "And it's really just a beautiful thing to see them come in and enjoy the dance and that's what's been keeping me going this whole time because every time the come in, they have such a fun time and we do too."

Dance for Parkinson's began in 2001 with the Mark Morris Dance Group, an internationally acclaimed modern dance company.Â The program has since expanded to more than 100 communities in 11 different countries.

"The thing about a dance class is because it's enjoyable, because there's music, because there are people dancing together, it's something that people want to return to," says David Leventhal, one of the co-founders of Dance for Parkinson's. "And in the process of that they're working on the specific skills of balance, coordination, flexibility, rhythm, initiation, multi-tasking - those things that start to go away when you have Parkinson's."

And the class doesn't only benefit people who have Parkinson's. Weezie's husband David attends the class with his wife and says he gets a lot out of it.

"One of the things for them is it gives us a chance to be physically expressive," he says.

Classes almost always begin with a name game, in which the participants go around the circle saying their names and selecting a movement for the day, and end with a gift circle, in which everybody gathers in a circle and gives another person an imaginary gift, using various gestures to create the gift.

"There aren't many settings for adults in this country where you get an opportunity to do something like that without feeling ridiculous," David says. "It's extremely refreshing and I think particularly for someone with Parkinson's, whose ability to move and express herself in gesture and other things, it is quite liberating."

Those who take the class say the dancing makes them feel stronger and gives them much-needed control over their bodies. Richard Hatch has been attending since the beginning.

"When I go without it, I feel it immediately because your body gets used to it," he says. "It's exercise and that's really the most important thing that you can do with Parkinson's."

"And that's basically what the nervous system is all about, is communication," Rebec says. "You want to have neurons talking to other neurons in a way that will allow behavior to improve and you can do that effectively with exercise."

But the benefits aren't only physical. Smith says one of the most important aspects of the dance group is it serves as a supportive community for everyone involved.

"I think people with Parkinson's tend to isolate themselves because they feel as though they are different now," she says. "To have that sense of community is very important."

Her husband agrees, saying the program doesn't focus on the challenges the disease presents.