While Stan Has Another Go At Evil, Gould Hits The Road 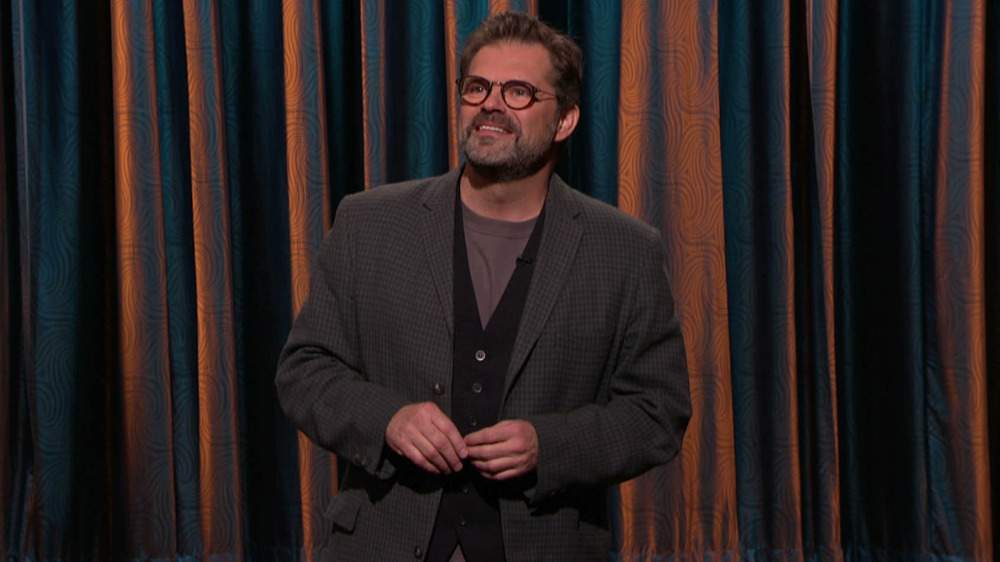 Comedian Dana Gould is always doing at least four things at once and it's performing stand-up that gives him the power to handle the chaos.

"Everything that I do creatively is powered by the energy that I get as a stand-up," Gould says.

The comedian, writer and actor performed December 1-3 at The Comedy Attic in Bloomington, Indiana. After beginning his stand-up career at age 17, the Los Angeles-based comic has written for "The Simpsons," "Parks and Recreation," and is the host of a podcast called "The Dana Gould Hour."

Everything that I do creatively is powered by the energy that I get as a stand-up.

Gould, 52, has a new comedy horror show "Stan Against Evil," which premiered June 2016 on IFC and was just picked up for a second season. Although show isn't set in any particular time, its aesthetic borrows from low-budget movies from the 1970s.

"I wanted it to feel like the kind of scary TV movies that were on a lot in the early 1970s, like "Dark Shadows" and "The Night Stalker," and "When Michael Calls," Gould says. "That was the stuff I was watching at that time."

Many other new TV shows are steeped in nostalgia - "Stranger Things," "The Get Down" and the revival of "MacGyver," to name a few. Gould has a theory about why we look to past eras for comfort.

"You know, you yearn for your childhood. You think it was a simpler time because you had simpler concerns because you were only 12," Gould says.

Gould's childhood was not always rosy, though. Raised in Hopedale, Massachusetts, Gould had four older brothers who were interested in sports, hunting and fishing. Gould says he felt like an outcast.

"The house was made of crystallized testosterone," Gould says. "I just didn't feel like I belonged in any of that."

Growing up the outcast led Gould to identify with the monsters in the movies and TV shows he loved. "Frankenstein," "Wolfman" and "Planet of the Apes" resonated, Gould says, because the monsters are misunderstood and separate from the rest of society.

"'Planet of the Apes' I related to so much, so strongly to me," he asserts, "because I felt like: yeah, I get it, I know what it's like to be stuck in a world that does not make sense to you. Because I'm living in one too."

Still, what made Gould an outcast as a child made him successful later in life. In fact, it was Gould's fascination for all things horror that made "Stan Against Evil" a hit when his other TV show ideas fell flat.

"It's like finally you tap into something that has your passion behind it," Gould says. "That just seems to have some extra heft and weight that carries it through."

Long before landing his new show, "Stan Against Evil," Gould had been writing for some of the most popular TV comedies. He worked as a writer for "The Simpsons" for seven years and as a producer on "Parks and Recreation" for a year as well. "Parks and Recreation" became stronger when it shifted its focus from the setting to character development, Gould says.

"As much as people in Indiana watched that show and thought, god they nailed it, people in Maine think the same thing, because the actors were so tuned into who those characters were."

One of the characters Gould had a hand in creating was that of Ron Swanson, the department's staunch libertarian and bacon aficionado, by giving Swanson an alter ego as a smooth jazz saxophonist named Duke Silver.

Before he took his place behind the scenes on TV shows, though, Gould worked the room as a comic. It wasn't until he was hired to work on "The Simpsons" in 1999 that Gould shifted his focus from performing to writing. Within a few months, he married. These were big changes in a short period of time, Gould says.

"I was a grown-up. I got up in the morning, I had coffee, my wife and I went to our jobs, we went to our offices, came back, and watched TV at night. It was great. I mean, I really loved it. But I went into a totally different life."

After seven years with "The Simpsons," Gould shifted his focus toward taking care of his three children and writing features from home. It didn't last long though.

"I was just a bored house husband," Gould says. "I was always doing stand-up, but I felt out-of-shape. I felt disconnected from who I was."

Returning to stand-up with new energy helped Gould to reconnect with that self.

"I really need to perform," Gould says. "The great thing about stand-up is the immediacy of the response and the connection with the people," Gould says.

Gould questioned, however, whether his stand-up career was stunted by taking time off to write for "The Simpsons."

"I do wonder, had I not done it, would I have continued to pace with my contemporaries, Patton Oswalt and David Cross? That was the path that I was on," Gould says.

Gould says he does not regret his path but he wants to continue to make a name for himself. In fact, the time to be a comedian is more important than ever, he says. He incorporates politics into his routines, he says, butÂ he is careful not to alienate his audience by shaming anyone for their political beliefs.

Gould wants to keep the debate going, and does so in a number of different media.

"I have a TV show, a podcast, I have a stand-up career, I'm writing a graphic novel," he says.

Although he has a lot on his plate, Gould insists that he really needs the chaos to thrive.

"I'm much better in a fire than meditating," Gould laughs.