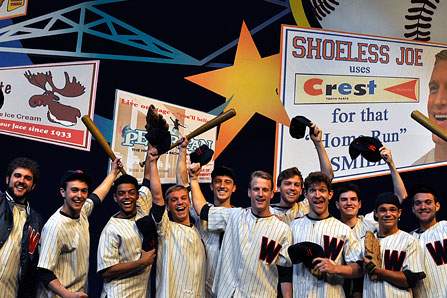 The musical Damn Yankees based on the book The Year the Yankees Lost the Pennant is the season opener for the Indiana Festival Theatre. It's the story of a Washington Senators' fan so committed to the team and to his hatred of the Yankees that he's willing to sell his soul for a pennant and of the devil who takes him up on it.

Damn Yankees by the song writing team of Richard Adler and Jerry Ross came out following their success with Pajama Game. It opened in the spring of 1955 as the major league season was just getting underway. The Senators were coming back from their sixth place finish the previous year. The musical went on to award winning success and 1019 successful performances. The Washington Senators went on to eighth place in the American League, losing in 101 of their 154 performances. It was a year, like many before and after in which the Yankees did win the pennant.

J. Allen played the aging fan with Colin Van Wye taking over as the transformed champion ball player. Hana Slevin was the charmingly understated dramatic heart of the production as his long suffering wife. Don Farrell was slickly snaky as the devilish Mr. Applegate with Charnette Batey as the charmer Lola.

The rubber faced Taylor Crousore with perpetually grinning Kurt Semmler and Colin Schreier were a trio of key players for the team. The thoughtful manger was Matt Birdsong. Erica Evans-Johnson was a snoopy D.C. reporter.

Music and dance for Damn Yankees range from ballads like "Two Lost Souls" through the country style "Shoeless Joe from Hannibal, MO, "locker room gymnastics like "You Gotta Have Heart" and on to Latin tinged pieces like "Who's Got the Pain." Musical direction was by Terry LaBolt with economical set design was by Fred Duer and costume design was by Robbie Stanton.