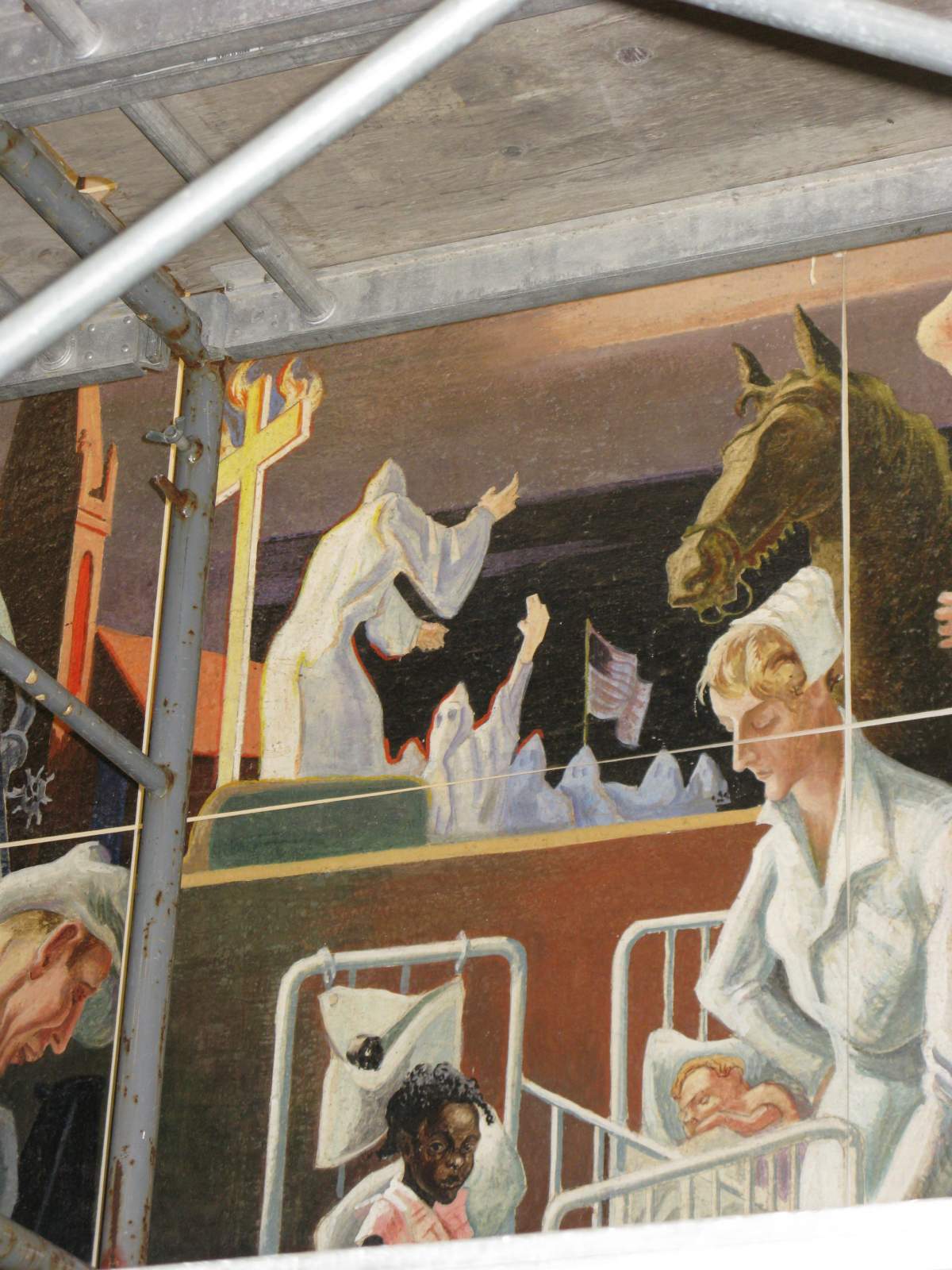 A cadre of painting conservators is working feverishly to restore an importantâ€“and infamous-work of art on the Bloomington campus of Indiana University, before students return for the fall semester.

The process of stabilizing an aging masterpiece provides the opportunity to consider something that's iconic, or larger-than-life, from an intimate vantage point. And Thomas Hart Benton's Indiana murals are nothing if not larger-than-life.

Originally commissioned for the Indiana Hall at Chicago's World's Fair in 1933, Benton's murals depict the history of Indiana, from mound builders to steel workers, over the course of two hundred linear feet. The mural was donated five years after the fair to Indiana University, where the Auditorium was being designed with the artworks in mind. But because the building's lobby held only sixteen of the twenty-two panels, the remaining four were set in the University Theater, the Auditorium, and in Woodburn Hall, Room 100.

With funding provided by the Getty Foundation and the National Endowment for the Arts, the murals in the Auditorium's lobby were restored in the late nineteen-nineties. The University has supported the restoration of the panels inside the University Theater and Woodburn Hall, Room 100, where conservators are addressing the mural's degradation before the room goes back into use as a lecture hall in September.

"Paintings are components, basically. They all react differently to changes in relative humidity and temperature," explains Margaret Contompasis. Contompasis is the IU Art Museum's Gayl W. and Beverly Doster Conservator of Painting. She is leading the team in Woodburn 100. "It's hard enough to keep them stable in a room that doesn't have 400 people coming in on a regular basis several times a day."

Even before considering environmental issues, conservators face a fundamental problem with the Benton panels. "They all suffer from a condition that we call â€˜inherent vice,'" Contompasis says. "There was nothing wrong with the materials Benton used, but the way he used them was not in the traditional manner."

The egg tempera technique, for example, prescribes the use of a solution of egg yolk and water as a medium to be mixed with ground pigment. But Benton used the egg yolk and water solution as a finishing varnish. The coating is so strong that it dries and contracts, pulling the paint off the wall as it shrinks.

Benton's painting technique isn't the only aspect of the panel that suffers from what Contompasis calls 'inherent vice.' In the background of one of the two panels in Woodburn 100, we see a burning cross and white-hooded figures.

Entitled "Parks, the Circus, the Klan, the Press," this panel is painted with a depiction of 1920s history in Indiana, from the inception of the State Parks system and the burgeoning circus industry to the infiltration of the state government by the Ku Klux Klan, and finally the Pulitzer Prize-winning journalists at the Indianapolis News, whose investigative reporting toppled the Klan's power.

Nan Brewer is the Lucienne M. Glaubinger Curator of Works on Paper at the IU Art Museum and co-author (with Contompasis and Kathleen Foster) of Thomas Hart Benton and the Indiana Murals. "Benton felt it was important to show history, warts and all," she explains. "You didn't grow if you didn't learn from the past. This was a very progressive idea at the time."

Nonetheless, the imagery has incited protest and controversy ever since it was unveiled. "Benton knew that this was loaded subject matter," Brewer continues. "When he invited his patrons, the Indiana legislators, to come and look at the mural while he was painting it, they said â€˜Oh, no!' This was meant to be a propaganda tool for the state. They wanted to encourage people to come and live and work and play in Indianaâ€¦ especially during the Depression."

The Klan panel has troubled viewers ever since. Its separation from the rest of the mural cycle decontextualizes it, and its installation in a classroom, just above eye level, intensifies its scrutiny. In 2002, IU's Black Student Union demanded the panel be covered or removed. In the fall of 2010, a didactic display is to be installed in the vestibule outside Woodburn 100 that includes a border reproducing the entire mural cycle.

Providing some context for the scene should help, but it's important to note that the theme of healing is already embedded in the panel. At the painting's center, a blond nurse ministers to an African-American child sitting up in bed. A white child lies in an adjacent bed.

"The black child in the hospital bed may be an indication of the suffering inflicted by the Klan," Brewer surmises. By placing the scene of integrated health care at the center of the composition, Benton intended to make a statement "for tolerance and against bigotry," according to Brewer's research.

"Maybe," Brewer ventures, "it was a symbol of healing and reconciliation, in a broader sense."