Curator Of Books, Creator Of History 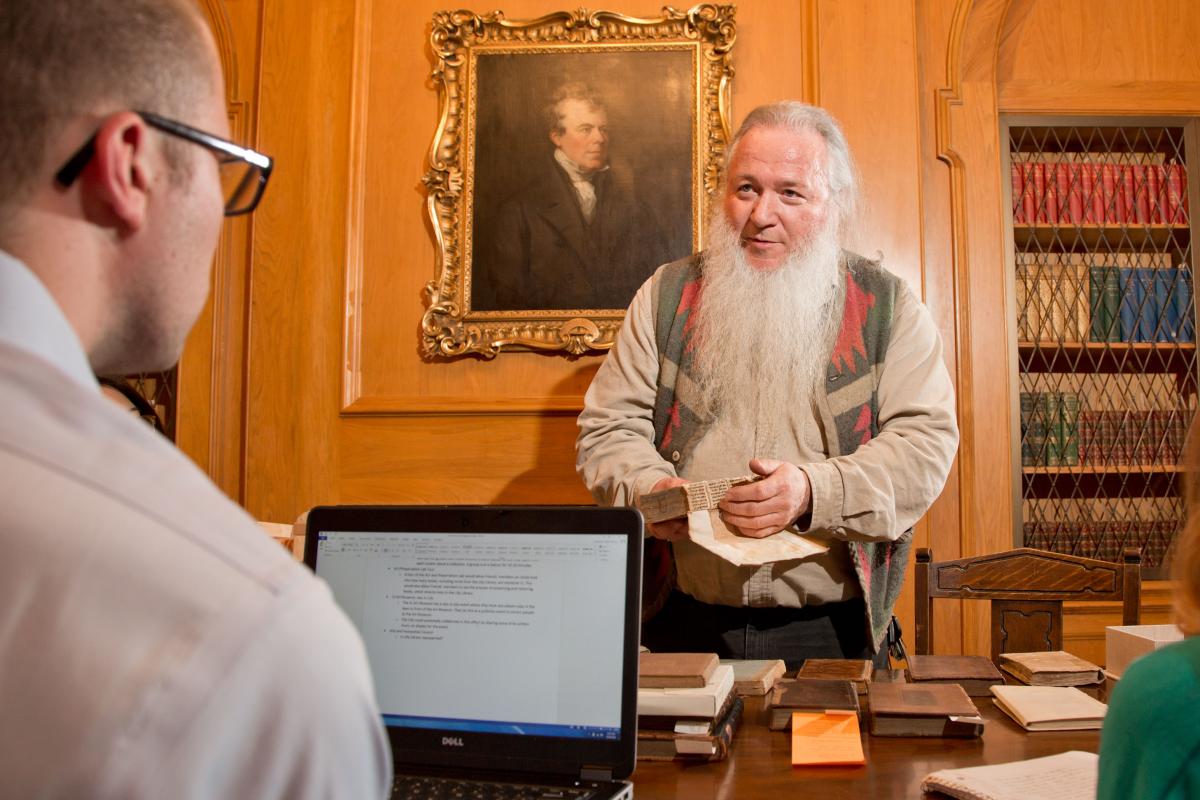 Jim has been working at the Lilly for 32 years as the conservator and sometimes has the opportunity to teach students and lead discussions on the conservation of rare books and manuscripts. The materials housed in this library are far from typical: 450,000 rare books, 8.5 million manuscripts, 30,000 mechanical puzzles, and 150,000 pieces of music. Most of these items are old, and some of them date back to the fifteenth-century, so when a book is falling a part or needs to be properly displayed for an exhibition, that’s where Jim comes in.

“These are linen chords and this is a fifteenth century manuscript that's being sewn around these double chords,” said Canary, “so then they'll be attached and then they will be laced into cover boards, and then that will be wrapped in leather. This is before paper and so it has a nice rattle, and it's been all handwritten and illuminated.”

Most people might not be familiar with the materials housed in the Lilly, whether it’s because of age or because its in a different language. But Jim has worked on a several items that people will recognize.

“One of the things I really enjoyed early in my career here was the opportunity to work on the 1816 constitution, Indiana's state constitution. And so that was brought down with the state police. Working on the 1816 really was quite moving because it was one of the most important things I had worked on up to that point. I was born in Indiana, I'll probably live the rest of my life in Indiana ,and it just felt like a very important piece to be working on.”

Jim does read e-books, but there’s something about handling physical books and looking at pieces of art—or history, depending on how you look at it—that doesn’t seem to be going out of style.

“I'm a Craftsman. I'm not an artist. I'm not trained as an artist. I've had a couple of years of papermaking and then I did a little printmaking, but primarily I think of it as artisan or craftsmen work," Cananry says, "but it's also a blend of that and science because you're working with a lot of different materials, and the interaction of those materials; having to know about the environmental conditions and storage conditions of the building to be able to preserve them and always keeping up with things.”

As a curator of historical documents and artifacts, Jim Canary is also arguably a creator of history, because without people like him, pieces of art could not be shared with future generations.