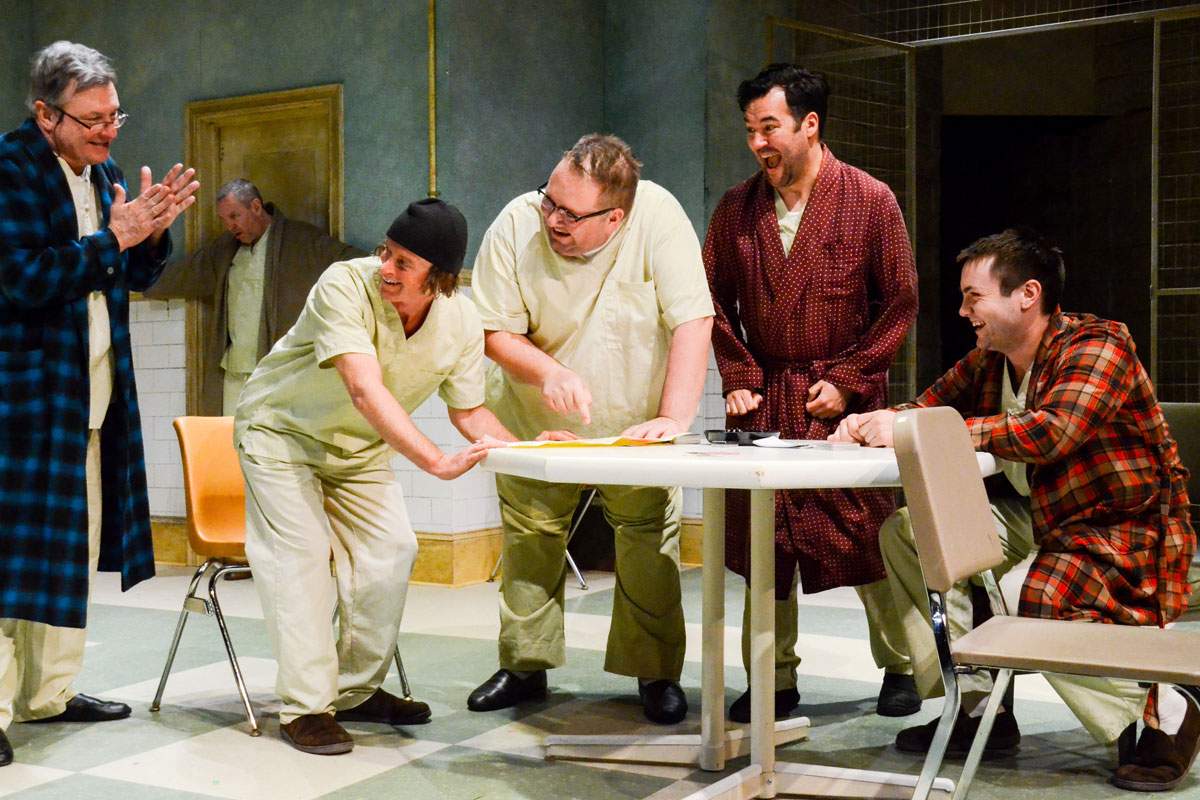 As you enter the Cardinal Stage Company's production of One Flew over the Cuckoo's Nest a steel door closes behind you. With Mark Smith's scenic design you're actually inside the day room of a mental institution. On the left is the glassed in raised nurse's station. On the right is the exit to the rooms.  The walls are drab, the pipes exposed, the table and chairs are beat up. The couch has a rip in the plastic upholstery. The window is bared.

The sloppily dressed patients are playing a desultory game of cards. In sharp contrast, a very purposeful clip board bearing Constance Macy as Nurse Ratched is in a starched white uniform. Mike Price appears as a new patient, Randle McMurphy. He's gotten out of the drudgery of his sentence at the work farm looking for an easier life as a mental patient.

McMurphy is an attractive fellow, full of piss and vinegar. He's a gambler and a risk taker. Right from the beginning he sizes up the room's dynamics and sets out to battle Nurse Ratched by energizing the patients. One of his aids will be the most unlikely patient, Jeremy Proulx as Chief Bromden. Although diagnosed as deaf and dumb, the chief muses aloud to the audience during breaks in the action. He talks of the Indians' loss of lands and character in their unequal battles with society.

McMurphy's innocent sharing of some chewing gum and later of their common child hood rhyming game brings the two together and energizes the chief in some wonderful theatrical moments.

Mike Price seems simply to have been born to play the energetic schemer McMurphy. Constance Macy does a fine job with the character of Nurse Ratched. We may not like her, but with Macy's help we do understand her. Jeremy Proulx in his second production as Chief Bromden is clearly finding depths in this pivotal thematic figure. The portrayal of the other patients was wonderfully detailed. Roderick Peeples was outstanding as the avuncular Dale Harding. Allan Craig was a standout as the occasionally brave Charles Cheswick. Ian McCabe was all stammers and tics as the mother dominated Billy Bibbit.

Dale Wasserman's play based on Ken Kesey's book is a masterful piece of theater with interesting characters and a moving story. The Cardinal Stage Company's production directed by Randy White is superb retelling.  Although much of it is a dark an even funny comedy, the arc is one of moving personal sacrifice and tragedy.

The Cardinal Stage Company's production of One Flew Over the Cuckoo's Nest  continues through February 28th.