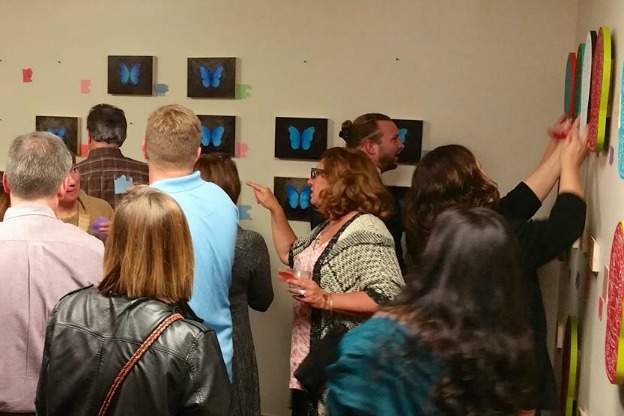 EJ Ernsberger remembers his experiences as CSA shareholder with fondness.

"Every time I've done a crop CSA," recalls the Indiana UniversityÂ AuditoriumÂ lighting technician, "I was super excited to see what new vegetable was going to come into that share that week."

A CSA-which stands for Community Supported Agricultureis a way for farmers to ensure a market for their goods. "Typically one farmer organizes a group of farmers," explains entrepreneur Mark Need, "and they all contribute portions from their farms...and families buy ...Â share[s] in the CSA."

And every week during the growing season, the shareholder picks up a box of fresh produce that represents what the member farms are growing. Â "Part of the fun was to see the same people at the pick-up days," Need recalls from his own CSA days. Â "People exchanged recipes about what they might make with that week's share because you didn't know exactly what the share was gonna be until you showed up."

A Is For Art

NeedÂ built that element of surprise and the sociability of pick-up day into his new non-profit-CSAB (Community Supported Art Bloomington).Â "But the A," Need clarifies, "is Art instead of Agriculture."

You don't know exactly what you're going to get but you're counting on the quality of the art based on the artists whoÂ are contributing.

For his initial offering, NeedÂ has made 30 shares available at 300 dollars apiece. The share gets you three original pieces of art by three different artists, and an invitation to a private VIP member event to pick up the artwork and get to know the artists.

"We have artists with recognizable reputations," Need avers. Â "You don't know exactly what you're going to get but you're counting on the quality of the art based on the artists whoÂ are contributing."

There'sÂ a deep sense of trust that underlies the adventurousness here, not dissimilar fromÂ a willingness to get rutabagas or raspberries in your CSA box.

"[CSA shareholders] sort of count on the integrity and reputation of the farmers," Need asserts, "to know that they don't know exactly what they're getting in their share but they're comfortable that they're going to get good produce, fresh produce, something interesting to bring home into their kitchens."

A Game Of Trust

"When Mark was describing it to me," explains Ernsberger, a charter CSAB shareholder, "he started to describe the different styles of art that were going to be available in the share.Â And I just told him to stop right there. That I really didn't care. It didn't matter because whatever it is, it's going to be fun, and interesting."

Ernsberger'sÂ gamenessÂ speaks to his belief in the relevance of CSAB's missionto support the local visual arts. Â "I very much appreciate Mark and company creating a way for people to purchase art and for the artist to get paid," Ernsberger says, "because that pathway is very, very difficult."

"The reason I was interested in it," explains printmaker Jeremy Sweet, "is that the system for showing and selling art, I feel, is broken." Â Along with ceramicist Stephanie Galli and painter Erik Probst,Â Sweet is creating 30 new works of art for CSAB's inaugural offering.Â TheÂ Associate Director of the Grunwald Gallery at IU, and the curator of numerous pop-up shows, Sweet brings a working knowledge of the art market to his perspective as a practicing artist.

"The great thing about the CSA is that artists get paid," claims Sweet. Â "Artists are going to be guaranteed 30 sales, or their chunk of that. It's rare that you're go into a show and you're going to make 30 pieces and they're all going to sell."

And it's not only the artist who has to take that sort of risk. Unlike a theatre or concert hall, an art gallery normally doesn't charge admission. Â Nonetheless, Sweet notes,

The CSA model, on the other hand, spreads the investment among the shareholders, who are rewarded with the VIP event, along with the opportunity to acquire artwork at a significant discount. Sweet explains,

It's a win-win for collectors because we're giving them an opportunity to get work at wholesale and then the artists benefit because they're selling every piece so, with the artists taking a little less they benefit not only from the income from every sale 30 pieces on collectors walls. So, we're connecting collectors with artists and hoping that both of them are getting a great deal.

Why the 300-dollar price point? "We tried to build the model," Need explains, "and scale it at a level where it would be affordable enough from shareholder's perspective that it was a calculated gamble at the worst! Â ButÂ still gave enough back to the artist that we had real art and inspired them to do something meaningful and unique for the process."

Need's art-selling model took its inspiration from the world of food. Its success may depend on enough shareholders who bring the same sense of adventure to collecting art as Ernsberger does to dining out, as he describes

Â I will often go to a restaurant and ask a few basic questions about what's fresh or what's new, and often you'll find that the waitstaff is excited about something brand new in the restaurant that someone's just created, and I'll say, 'Bring it!' and they'll say, 'Don't you want a description?' and I'll say, 'Why? You're excited, that's what I want to eat!'