“Cry It Out”, Tears…But With Laughter 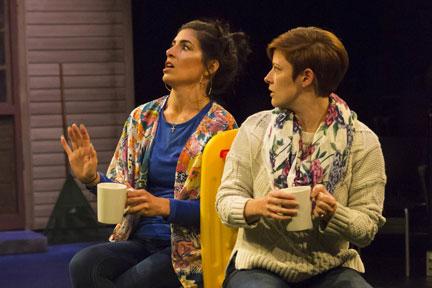 Molly Smith Metzler's Cry It Out in Indianapolis's Phoenix's intimate Basile Theatre is a terrific play.

Jessie and Lena are a pair of new mothers who share a passionate love for their new borns, warm senses of humor, and a back yard in Port Washington, Long Island, and not much else. Jessie was born in Illinois. She's an attorney on leave from commuting into Manhattan for her job as an eight-year veteran corporate lawyer. Lena is a Long Island girl who will be taking the bus back to her hospital job and is a five-year veteran of AA sobriety. The story of these richly drawn women is full of the experiences and challenges of children and just how it is changing their lives.

Jessie has decided that she isn't ready for next stage that her businessman husband Nate and his parents have planned. She wants to stay at home and spend her time with baby Allison. Lena doesn't have this luxury. With her job and, John her Max's father's job they are just getting by, even living with his mother.

Into this very warm and supportive pair comes the wealthy business owner Mitchell. He's been watching the two with their regular warmly social coffee klatches. He thinks that if his wife Adrienne joined them it would encourage her to be more motherly. The three do meet, but the haughty Adrienne makes it a disaster from start to finish.

No matter what anyone says about having children…and there are lot of anyones who'll say a lot…it is an amazing, uplifting, transformative and frightening experience. Couples, who may have courted, married, had jobs, bought furniture, appliances, and even a house together all quite calmly are ready to do go to war over whether a child's room's window should be open or shut. Family backgrounds and patterns that hadn't figured in young couple's lives suddenly kick into force. Grandparents who had expressed a hands-off attitude toward the couple may suddenly be quite involved with advice supported with care and in some cases cash.

All these factors come into play in this wonderfully constructed drama. The wealthy Mitchell, who after all owns his company, can take a leave of absence to be a housefather. The well off Jessie who wants to have another child will have to accept the day care from her husband's parents and return to the commuting life on her way to a partnership. Lena and Max's father can't depend on his mother and must seek a less expensive location and the option of splitting their time with a nighttime job for mom and a daytime job for dad.

Lauren Briggeman is quite wonderful as the warm, supportive, occasionally thoughtless Jessie who can also show a bit of the intelligent determination that made her a successful lawyer. Sally Scarbrough's Lena is a sympathetic comic foil, but one with her own independent, spirit and charm. Michael Hosp is fine as the hesitant father, at his wits end with hopeless plans for his wife. Andrea Heiden was neatly bitter as his explosive wife Adrienne…a difficult woman, but one who has a point about the different ways men and women are treated.

Chelsey Stauffer directs. The neatly designed set with Jessie and Lena's homes leading into a shared yard is by Daniel Uhde. Costumes and properties…including the eggs that Adrienne throws at Jessie's porch…are by Danielle Buckel. Zac Hunter did the lighting and the sound design was by Jeffery Martin.

Molly Smith Metzler's evocative Cry It Out in the Basile Theatre at Indianapolis's Phoenix plays through August 26.

You can find this and other reviews at WFIU.ORG/ARTS