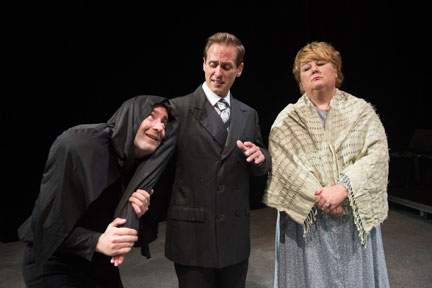 The Crossroads Repertory Theatre in Terre Haute opens their 2017 with a musical that's new to many of us, but based on a time tested original.

Mel Brooks and Gene Wilder's comic send up of the Frankenstein story in their 1974 film Young Frankenstein was a terrific success. Brooks moved on and it appeared that he was done with those Transylvania doings, but no! Fans can give thanks that more than twenty years later he returned to it. The story and the characters are familiar, and this time there's the added pleasure of catchy tunes, clever lyrics, lots more dancing and a few more twists and turns to enrich the story.

When I walked into the lobby of the Crossroads theatre, house manager Glenda Cordell asked if I was "ready to laugh?" It is a quested that the production more than answered in the affirmative.

The cast is a very accomplished and engaging group. There was energetic ensemble work and nicely crafted little character bits. All the singing was very good and the dancing inventive and spirited.Brett John Olson is outstanding as the reluctant doctor "Frawnkenstien". He's very good at seeming  baffled, but resilient. Crossroads veteran Brandon Wentz is the hump shifting Igor. Eileen Earnest charm the doctor and the audience as the maidenly assistant Inga. Jill Shutt is the formidable, horse frightening, Frau Bleucher and she had a very nice turn as a Marlene Dietrich stye chanteuse.

The Young Frankenstein musical's Monster is played by a tall robust Dave Harris. He's first an uncertain innocent with a hesitant smile and later a bit of a confident sophisticate. The Monster's early encounter with Chuck Shutt as a blind hermit is one of the many very funny scenes of the show. Jo Reger is quite perfect as the Doctor Frankenstein's shallowly brittle sophisticated lady and later as the woman overcome with passion for the Monster. Peter Ciancone is the one armed Inspector Hans Kemp, the Transylvania village's conscience and memory. Drew Hampton is a featured singer in the ensemble and appears as an expressive portrait of the doctor's grandfather.

The Crossroads' production is directed by Bill Kincaid with choreography by Teresa McCullough and dance captain Emily Wirkus, music direction by Mark Carlisle, neatly orchestrated scenic design and dynamic set pieces by Kevin Nelson and costumes by Jeannie Galioto. As many in Sunday afternoon's audience gave the cast a standing ovation, they bowed and also waved thanks to sound designer Michelle Tharp.

At the Theatre for you, I'm George Walker.