Shooting Back: Kids On The Hill Take A Selfie 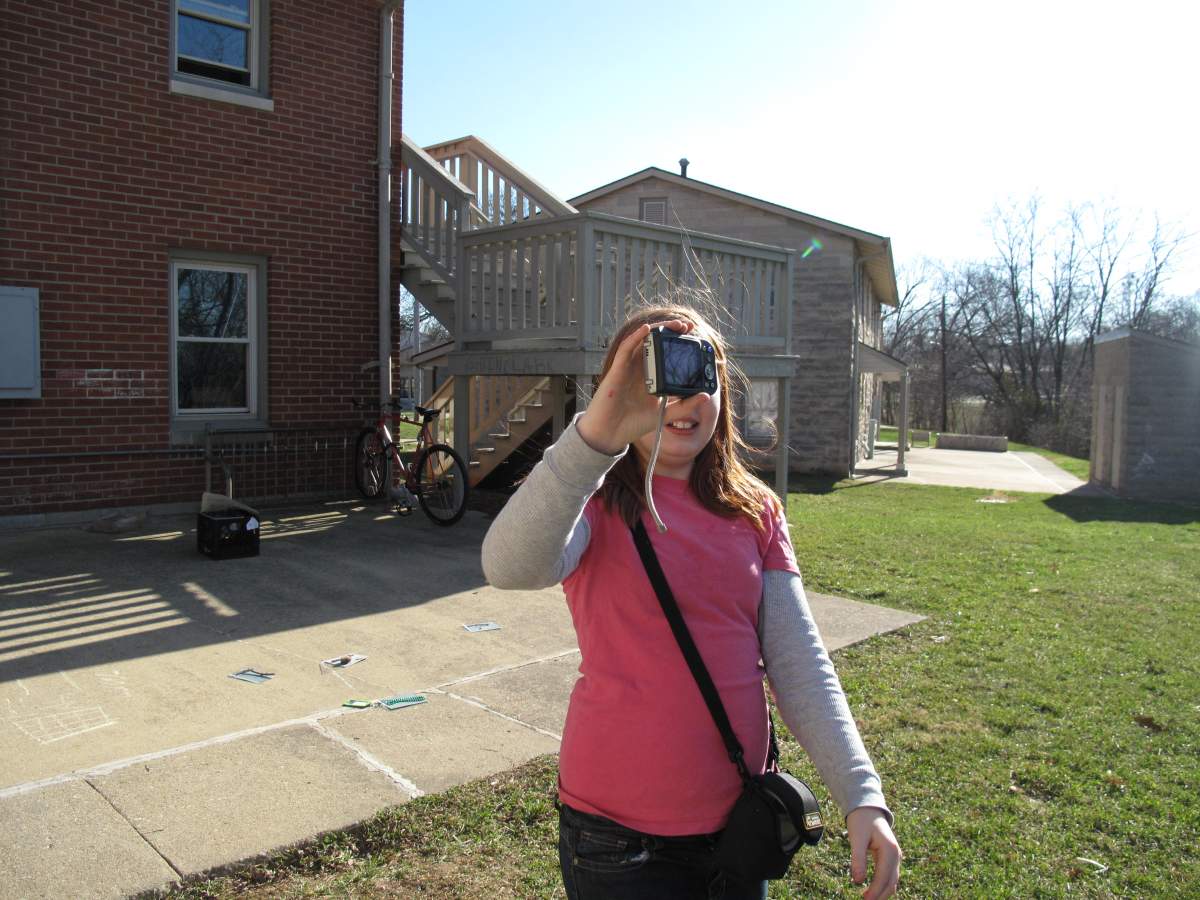 The IU Art Museum, Pictura Gallery, and the Monroe County History Center are all currently exhibiting photographs taken on Bloomington's northwest side-also known as Pigeon Hill. Two of the photographers whose work is on display-Jerry Uelsmann and Jeffrey Wolinhave their work in the Museum of Modern Art. The other pictures of Pigeon Hill now on view were made by kids who live there. The neighborhood's new generation is learning to tell their own stories.

Out In The Street

Street photography took hold of American visual culture in the 1950s. Even in the heartland, students in fledgling photography programs were heading out to the grittiest neighborhoods they could find, camera in hand.

"One whole semester I went one day a week to Pigeon Hill and photographed, here in Bloomington," Uelsmann recalled during a 2014 interview.Â He was making those weekly excursions to the rougher side of town while earning his MS and MFA from Indiana University. "I guess I naively felt that if I documented certain conditions that would help change those conditions, but obviously that condition still persists."

After graduating in 1960, Uelsmann didn't spend much too much more time pursuing documentary photography before venturing into the surrealistic photomontages that would secure his place in the art world. But photographers in Bloomington have kept trekking back up to the Crestmont Community, the public housing development also known as Pigeon Hill.

Welcome To The Clubhouse

On the first sunny Tuesday of the spring, Zandra Raines is showing the members of the photography club at the Crestmont Community Boys and Girls Club how to make pictures in the sun without a camera-a technique known as cyanotype. Like Jerry Uelsmann 55 years earlier, Raines is getting her MFA in photography from IU. "Jeff Wolin told me about photography club at the Boys and Girls Club that he started," she explains, "and I was interested in getting involved."

It's important for them to know that within photography they do have a lot of choices. They may not have as many choices in other parts of their life, but this is an aspect they really have a lot of control over.

IU Fine Arts professor Jeffrey Wolin spent several years taking portraits of people on the hill in the late 80s. He returned more than twenty years later to photograph them again, resulting in his series, Pigeon Hill: Then and Now. In the process of locating his former subjects, Wolin volunteered to teach a photo class for the kids in the area in the summer of 2011. Pictura Gallery donated equipment. The summer session turned into year-round programs at the Boys and Girls Club, the Banneker Center, and Fairview Elementary, taught by IU photography students.

IU alumnus Zach Felts runs the photo club at Crestmont.Â On the day I visited, Felts was helping Zandra with the cyanotype project, explaining to the kids how the nineteenth-century process replicates the workings of a digital camera. "If we're thinking about what's happening here with the image appearing thru the light," he told the fairly wiggly bunch, "the same thing happens with your camera. So when you press the button, a little window opens up and reveals light inside onto a digital sensor. So the sensorthink of it as this piece of paper."

An Embarrassment Of Pictures

One of the big challenges is getting the kids to think about photography in a fresh way.

"A lot of the time as soon as you hand them a camera," Raines explains, "the first thing they want to do is hold it out and point it at themselves."

Another connection to contemporary photographic culture the children share is its role in social media. "I have had photos posted on Facebook," a club member named Hannah boasts, "and I got about a million likes."

These kids have access to cameras, phones, and computers. Not like in the '60s, when Uelsmann was documenting their neighborhood. "Back then photography was a learned skill that not everybody had," explains Raines.

So what can these kids learn about something that's so ubiquitous? IU alumna Ashley Thomas has challenged her students to think more deeply about their subject matter.Â Â "'Why are you photographing this particular thing rather than just liking it?'" she asks them, pushing them to "try to have a story with it."

Felts often shows his students pictures taken from different points of view, "to try and get them to think that they don't have to be just standing up taking a picture at chest level. They can be on the ground; they can try and find a higher perspective; or they can get up close; get back.Â Just think about options; there's not just one way to photograph."

Realizing the abundance of viewpoints available to them offers another takeaway, Felts explains, "I think that's it's important for them to know that within photography they do have a lot of choices. They may not have as many choices in other parts of their life, but this is an aspect where they really can choose and have a lot of control over."

Given the choice, Thomas' students used photography to tell many different kinds of stories, she noticed,

One child would really be all about setting up action shots, and then the other one would be very fictional. We had little toys that they would set up and take pictures of, and create the little story that way. But then other people just wanted to take pictures of faces, and people doing things--just kind of candid photos. So it was really interesting to see the diversity that happened among these kids-they all lived in the same neighborhood, but they were all drawn to totally different things, and styles, and stories.

Photos by members of the Crestmont Community Boys and Girls Club are currently on view at Pictura Gallery and the Monroe County History Center, along with pictures by Jeffrey Wolin, and Jerry Uelsmann.