Behind The Wheel Of A Creative Retirement 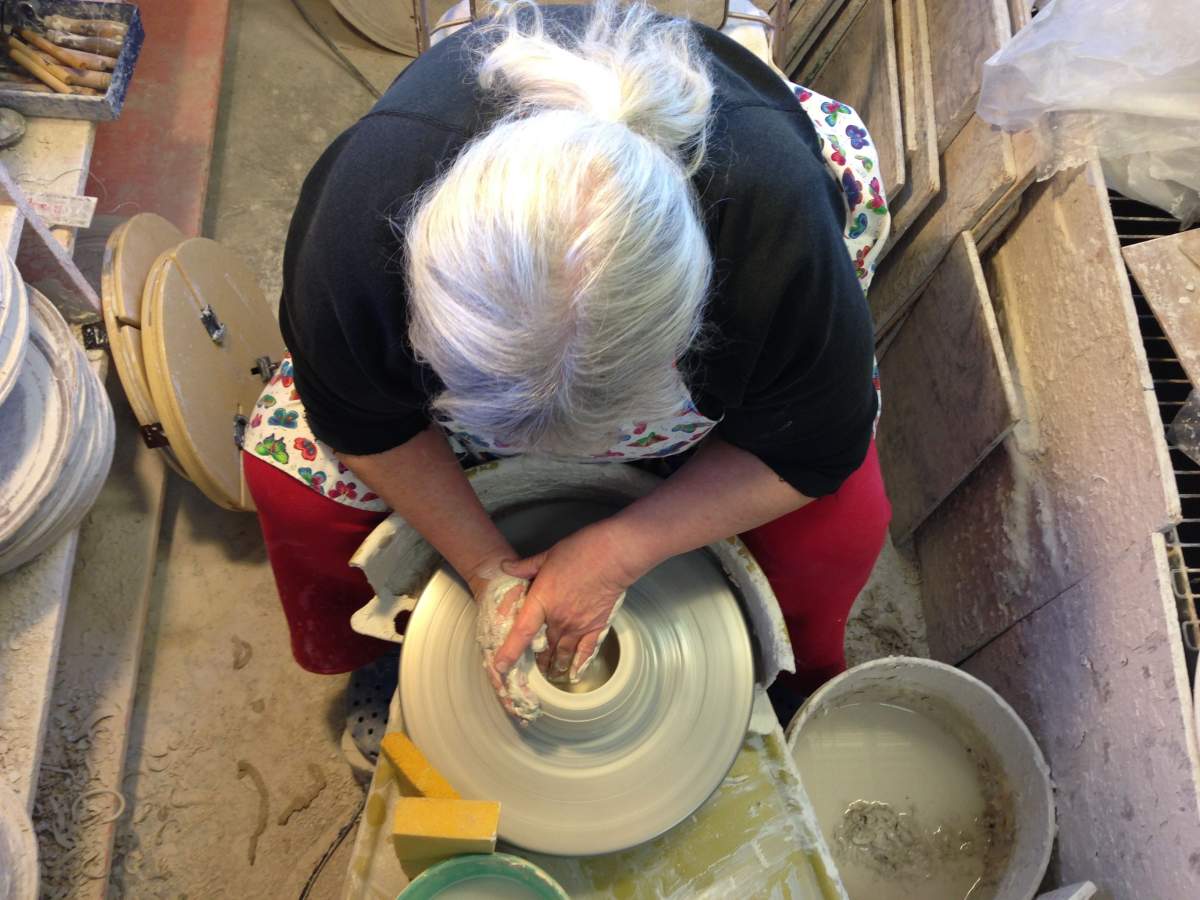 With just 40 steps from the back door of her house to her studio, Bloomington resident Barb Lund's daily commute is short.

Thirty years ago, Lund took a risk when she started a pottery business out of her home.  These days, the business is thriving.  Still, when things slow down in the winter and she gets a good break, Lund sometimes thinks about closing the door on her pottery studio for good.

"But I've also discovered in myself that about after a week or two, it's time to get back out there," she says. "It's really become kind of a calling."

In the studio, Lund sits down at her pottery wheel, and gently forms the clay into a vase by squeezing it, touching it lightly,and pressing down as she adds more clay onto the wheel. Lund found pottery by accident.

"It was really just a fun thing to do," she says. "I had a friend who was a potter, and I decided that looked kind of fun. So just for the heck of it I took a for fun class over at the Union, and it was just, ‘This is it; this is what I want to be.'"

Before Lund really got into pottery, she worked a rural paper route seven days a week that allowed her to take her young son to work with her. But, as her son got older, Barb decided it was for her to focus something that she wanted to do. After a number of classes, she took the leap and decided to make pottery a career.

"I really just felt like I stepped off the high board, and it was just what's gonna happen?" Lund says. "But it was the right thing to do."

Turning A Calling Into A Livelihood

She started her own business selling bowls, mugs and other functional pottery at art fairs. But the big business breakthrough was earring holders. With an hourglass shape and a fluted top, the four-inch-high ceramic pieces resemble flower vases, pierced with tiny holes all the way around the lip, where you place your earrings.

"I took them to an art fair, and they went like that," Lund says, with a clap. "The old light bulb went on and I thought ‘you are onto something here.' And I was so right."

When she started marketing the earring holders in 2004, 20 stores were interested off the bat.

"My income started going up, I was able to pay for my show truck," she says. "I felt comfortable enough later on to put this big addition on my house, and it's all thanks to earring holders."

Keeping The Gears In Motion

But as business provides, it also demands. Some days, paperwork and shipping keep her from the studio until 5 or 6 at night.

When I visit Lund in her studio around 5:30 p.m. one evening, she is already hard at work loading and unloading pottery from the kiln. Tonight's work consists of painting a recent batch of the popular earring holders. She takes them out of the kiln and mixes the paint with what looks like a huge electric drill with a long stir stick on it.

She glazes each earring holder, and back in the kiln they go. And then it's off to throwing the next batch.

Late nights and the other physical demands are claiming more of her attention as she ages. And, at 65, Lund finds that the art fairs are one of the most challenging aspects of her job now.

Retire? What else would I do? I mean other than sacred harp singing and throwing pots. So until I become truly physically disabled, I don't see why I won't be doing this at least to some degree.

"You drive there, you unload your truck, and everything is extremely heavy if you are a potter," Lund says. "Then you put up the tent, which is hard if you are a short person. Then you set up the store furniture and put all your pots out. It takes me about four hours to do all of that if I work straight through, and its physically pretty grueling."

So, while she used to do over 20 shows a year, this year she might do five or six. Lund says her current plan is to keep shifting the focus to online and wholesale orders. She expects to have the new addition on her house paid off by in the next ten years. But, as far as retirement is concerned, she's not sold

"Retire? It's just like what else would I do? I mean other than sacred harp singing and throwing pots.  So until I become truly physically disabled, I don't see why I won't be doing this at least to some degree.  I mean, at this point it's kind of an addiction."

Lanie Maresh worked with the WFIU Arts Desk and instructor Sarah Neal-Estesas part of her Radio Innovation course (J460)to produce this profile of Barb Lund.  A journalism major finishing her sophomore year, Maresh is also a beat reporter for the Arts section of the Indiana Daily Student.