Crawling To The Aid Of A Fading Monument 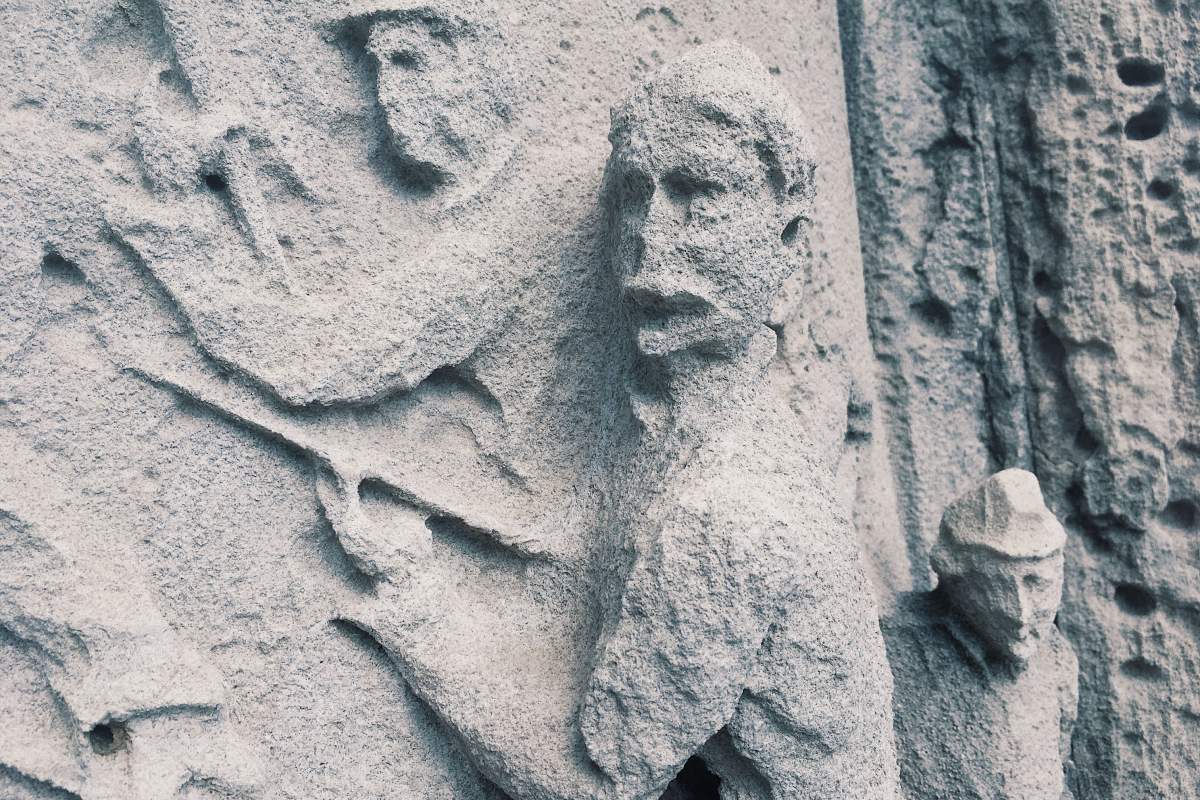 On June 9th, 1928, residents of Monroe County gathered at the southeast corner of the Courthouse Square in downtown Bloomington to dedicate a monument that's come to be known as the Alexander Memorial. It stands 35 feet tall, with a union soldier at the top and four panels on the base featuring inscriptions honoring the soldiers of all wars. Now, over 90 years later, to say the monument isn't looking as good as it once did is an understatement. It is withering away. Once detailed carvings of cavalry charges, and of Abraham and Mary Todd Lincoln, are now nearly indescribable blobs.

"At some point some, decades ago, some crew decided that it was a great idea to have the monument cleaned," says Todd Schatzmeyer, Executive Director of the Indiana Limestone Institute, "my guess is nobody vetted this solution. Nobody consulted with the institute, which is always available for these kinds of things, and from what I am told the contractor that did the cleaning used a very high concentrated acid on the stone."

This type of acid removes the surface off the face of the stone. To make matters more difficult, Schatzmeyer adds,"No one has to date been able to uncover actual drawings of this monument as it was designed from a construction standpoint," so it's guesswork on exactly how this thing is erected."

"This is not the way we need to honor the veterans of our wars," said Mary Elftman, Director of Veterans Affairs in Monroe County, who decided to take on the project of getting the monument restored. Elftman formed a committee made up of county commissioners, volunteers, and architects. The first order of business was to get images of the monument. Since it's so badly damaged, an artist or stonemason won't be able to fix anything unless they have something to work from.

"We've asked community members to look through their attics and their closets and things and see if they have photographs of the Alexander Memorial back from the 60s, 50s, 40s, earlier," says Julia Thomas, a Monroe County Commissioner, "we want to be able to ensure that we have an accurate depiction of all four corners of the monument. The other thing to add in there too is sometimes people take the old Super Eight film, and things like that. So there might be somebody that has some family film from the courthouse from decades ago. We'd love to be able to at least look and and see what's there."

The search for these images has been somewhat successful. Only three photographs of the four sides of the monument have been recovered, thanks to the Monroe County History Center and Indiana University's Mathers Museum. An image of the corner depicting a cavalry charge, the most damaged panel, still has not been found. Volunteers have made trips to the Ball State Architecture Library and have spent hours on microfilm machines looking through old newspapers to see if a photo of that side exists.

"You can't say thank you long and loud enough for those people," Elftman says, "They all have lives. They have jobs, they have children, they have grandchildren. They go above and beyond to help this project move down the road to, hopefully, a successful completion."

The next step was to raise money. After receiving donations from various veterans organizations, the committee was then able to accept public donations, which is also one of the ways the original monument was funded.

"We have a mantra that there is no donation too small, or too large," adds Elftman, "Even five dollars is going to make a difference."

The Commissioner's Office and Bloomington Visitor's Center are also selling apparel, commemorative coins, and coloring books of iconic Bloomington sites to help raise funds. Perhaps the most innovative fundraiser is a historic pub crawl, which will be held this Friday, June 22. Participants will take a guided tour to five bars located in historic buildings. A ticket includes drink samples, snacks, unlimited soft drinks, entry into the Bluebird for a performance by Fat Pockets and a special gift package with limited edition souvenir items. The date for the event was not chosen lightly.

"Two hundred years ago when the commissioners first founded the county," says Thomas, "the commissioners had their first meeting. One of the things they decided to do in their very first few months was to build the initial courthouse, which was a log cabin, appropriately enough, and they made a decision to establish this as the center of the town of Bloomington. They measured out the roadways and they said, 'we're going to sell off the lots.' And June 22nd was the day that the lots of Bloomington were sold off. And one of the things they decided to do to facilitate the auction of the lots was to buy a barrel of whiskey."

While the experience of a pub crawl or limited edition merchandise are fun perks to making a donation, Thomas wants to make sure that the the Alexander Memorial is not taken for granted by Monroe County residents, since it has traditionally meant so much to veterans and to the families of those who have fallen.

"It's something that's there every day. You drive by it, you walk by it, you see it out your window as you drive by, you see it as you bike by, you see it through the bus window," continues Thomas, "we lose track of the importance and the meaning of the monument because we see it every day and it doesn't make it any less important. I think it's really a great thing to get people to refocus on.

"It's important to the veterans," adds Elftman, "It's important to the town of Bloomington. Think about all the things that all take place on that corner. Even the student protests, or Thursday protests. All of those things take place there at the foot of that memorial. It is an iconic part of the Bloomington community. And I think that if we don't restore our historical memorials, we're destined to forget the men that sacrificed everything that they did."

To reserve seats for the Monroe County bicentennial pub crawl, visit the Monroe County Government's website. Both Mary Elftman and Julia Thomas will also be raising funds at Bloomington's Fourth of July parade.

Just look for the tallest monument on the Courthouse Square.