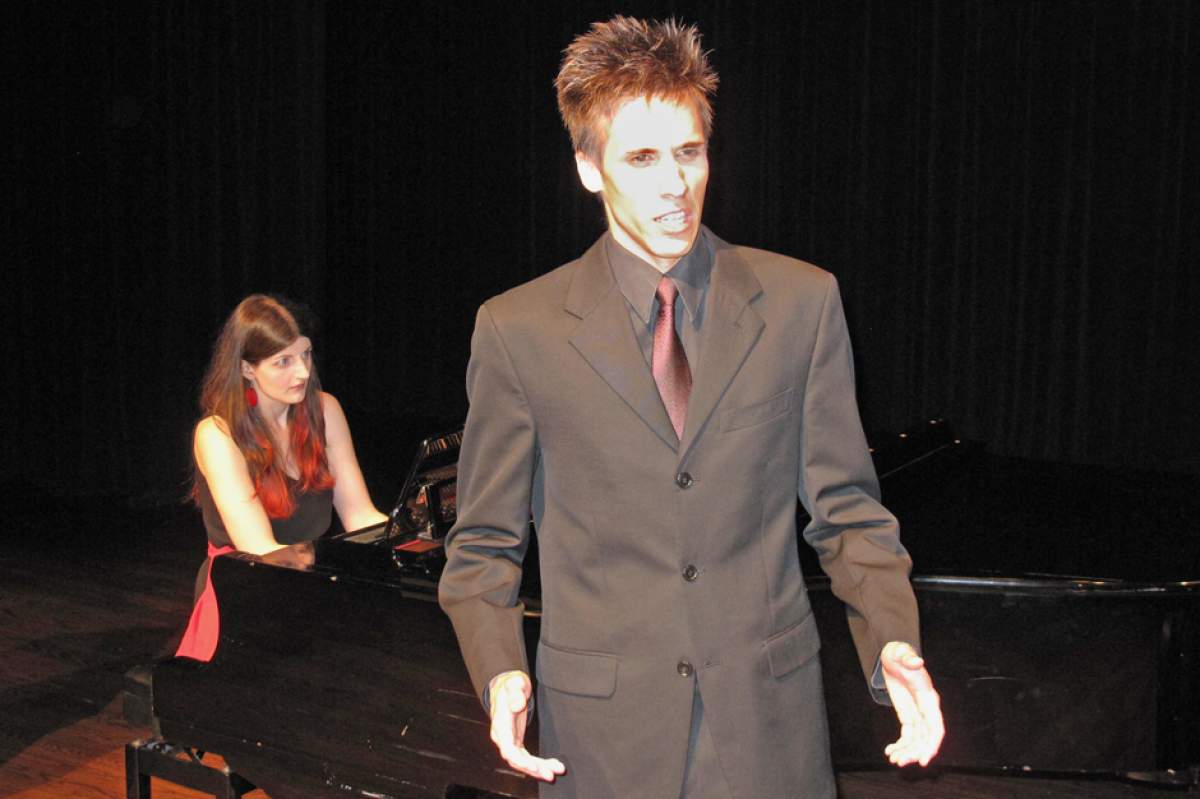 The high-register male countertenor voice, with its vocal range similar to a female's, elicits such reactions as "ethereal" and "haunting."

IU Jacobs School student Michael Linert is a countertenor who on the evening of July 15 bought that haunting quality to the John Waldron Arts Center auditorium, where he presented a recital of voice and cello works on the theme of life's mystery and uncertainty.

"The expression on their faces when they first hear you is of shock. And then, â€˜Is this OK?'"

It was more than OK for the appreciative audience, who enjoyed Linert's talents as a singer, cellist, and composer. A student of Brenda Brenner (strings) and Patricia Stiles (voice), Linert, who this summer will get his master's in music education at IU, organized the recital outside of any degree requirement.

He titled the concert "Veiled."

"I'm trying for us to take a moment to think about the feelings and thoughts that we have that are hidden, that we hide from others," Linert said. "And then what happens when we share those experiences with others. Is that a good thing, is that a bad thing?"

Wearing a black suit and dark red tie, Linert was accompanied on piano by IU Jacobs School doctoral student Alice Baldwin. Off to one side of the stage was an easel draped in black and red fabric that, in keeping with the theme of things being hidden from view, was kept veiled until the concert's very end.

The recital included two works Linert composed for solo cello, including a premiere of his piece, "Open Air" that in its very structure addressed mystery.

"The opening is a pizzicato opening, plucking the strings," Linert said. "To me, that's kind of â€˜the question.' And the rest of the piece is the answer-that perhaps does very little to actually answer the question."

Growing up as a boy soprano, Linert was worried that audiences wouldn't like his high register. When his voice started to change, he tried singing in a lower register, but was dissatisfied with the sound.

"I did much as I could to drop, and I was trying to sing tenor repertoire, but I couldn't access the lowest notes that would make it comfortable for me."

Then a suggestion changed his life.

"One of my teachers suggested that we try working up and just expand my range that way. Then we started doing that more often."

'The most beautiful thing they had ever heard'

Having had only a few of his pieces performed in public before, he was concerned about the audience's reaction.

"I didn't know what to expect. The audience reaction, especially after the concert, was quite positive. That was a pleasant surprise for me."

Linert performed his transcription of John Dowland's famous air "Flow My Tears." Originally written for voice and lute, at the recital he accompanied himself on his Baroque cello.

"That piece touched a lot of people," Linert recalled. "And I had set it up by reading the text before I sang it, so the audience had two times to hear it-I think that helped get the audience in the mindset for the piece."

Linert performs outside the concert hall as well, singing and playing cello on sidewalks in such places as Denver, Colorado. One street performance that stands out in his memory occurred in Bloomington when he was performing for homeless people who were hearing a countertenor voice for the first time.

"There was laughter at first. And then after about a minute of it, they listened more attentively than [at] anything I had played. And at the end some of them expressed that that was the most beautiful thing they had ever heard."

At the recital, Linert felt that his performance of the Richard Strauss song "Morgen!" went over particularly well.

"[It was] one of the pieces I felt I'd done the best on, that I hadn't done as well until that evening. Part of it was a blending of the collaboration between the pianist, Alice Baldwin, and I. She was very, very expressive on that evening. And I felt like when I sang it, I really meant it. It's a very difficult piece and I will sing it many more times to truly sing it the way I want to-it's always revamping and reworking things."

For the recital's encore, Linert at last unveiled the easel that had been under wraps all evening. Audience members laughed when they saw a sign with a large smiley face and the message, "What did you expect?"

We can expect to hear more from Michael Linert as he embarks on a career as a performer and teacher. He hopes to take "Veiled" to such cities as Denver, Philadelphia, and Hartford, continuing to give audiences that "countertenor rush."

Learn more about Michael Linert and watch videos of his recitals on his Web site.