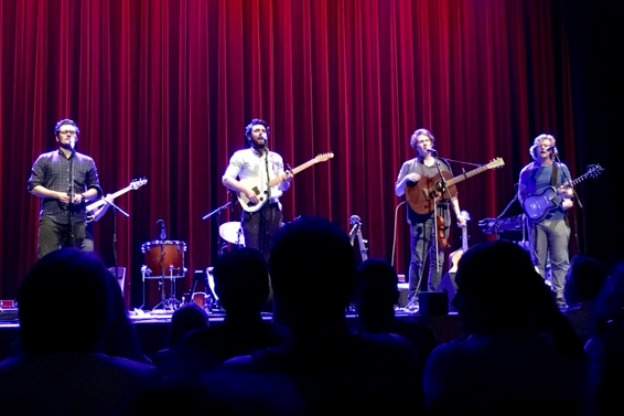 Pig Pen Prepares For Showtime At The BCT

It's 2:30pm on a Sunday, and onstage at the Buskirk Chumley theater in downtown Bloomington, Pig Pen Theater Company - a New York City based band and theater company, is completing the last of their load in, and doing their sound check. They'll perform tonight, with a set of music pulled together from their award-winning plays and albums. It may seem like just another night, another concert at the Buskirk Chumley, but the presence of Pig Pen, this up-and-coming experimental performance troupe, in the BCT space speaks to the venue's role as an incubator for emerging talent. Things didn't always used to be this way, though.

Restoring And Reviving The BCT

Danielle McClelland has been at the Buskirk Chumley Theater since 2001. When she was hired the theater had just been restored "The Bloomington Area Arts Council had done an incredible job raising 3.5 million dollars planning a renovation of what had been a very seriously deteriorated movie theater into a live performance space," McClelland says. McClelland is the executive director of BCT management which is the private nonprofit that operates the Buskirk Chumley theater on behalf of the city of Bloomington. "Unfortunately the renovation itself ended up costing 4.5 million dollars," McClelland says. "[The Bloomington Area Arts Council] had to take out a loan in order complete the renovation, and so they opened with a great deal of debt and very little cash flow left. So it didn't take very long for the Arts Council itself to fall into financial crisis, and everything had to be re-configured at that point. So BCT management was formed with the express purpose of just managing this theater and it was a brand new organization built from scratch by a small group of Lotus World Music Festival board members who had a vested interest in seeing the theater come out of this crisis." But McClelland wanted to do more than survive. She had a vision for the Buskirk Chumley. "So my goal for the theater when I started was to get past the financial crisis into financial security, and to execute the dream the arts council had had when they had embarked on the renovation campaign, which was about a venue that could do as many possible things as the physical limitations of the theater could allow, be a home to as many different performance groups as possible, and the community's living room, where everyone would feel comfortable," McClelland explains.

So in those first two years McClelland ran the Buskirk Chumley, she put the theater on track financially towards achieving this dream by negotiating an ongoing partnership between city funding and private non-profit funding to operate the theater. She also ran the theater with just one other staff member for those first few years. "We did presenting, we did the BCT family series," McClelland says. "We created the Classics on Kirkwood, which was a classic film series. We didn't do any major label music promotion until 2004 but at the tail end of that two and a half years we brought in Rickie Lee Jones, and the Indigo Girls followed fairly soon after that, and that launched us into some bigger names."

From there on the Buskirk Chumley really started to grow in the diversity of its programming. Local theater companies started to produce work in the BCT. From 2003 on, Bloomington Music Works, the IU Union Board, and Cardinal Stage Company (among others) would produce musicals and opera on the stage on an annual or semi-annual basis. Now, 15 years after the initial opening of the BCT in 2001, the theater boasts 178 public event days per year. This yearly lineup still includes the aforementioned theater productions, (though Bloomington Music Works has since dissolved), marquee performers such as the Milk Carton Kids, the Tallest Man on Earth, and a variety of community events. Seasons over the past few years have also boasted local and regional symphony performances, talks and lectures, and more recently festivals like Middle Coast Film Festival, Pride Film Festival and the Limestone Comedy Festival.

A Theatre That Supports The Local Community

McClelland believes the theater has done a lot for arts lovers and arts entrepreneurs in Bloomington. "I mean imagine Bloomington without the Buskirk Chumley," McClelland remarks. "There's a lot less to do in town. There's also a lot less opportunity for entrepreneurial artists to have the possibility for success, because there's not only not a venue, there's not a box office, there's not a marketing resource, there's not a way to present what the show is to the public, those same organizations can't capture the names and contact information of the people who come to their shows." Since the theater is still first and foremost a resource for the community, McClelland feels she's been able to cultivate a unique local audience with a sense of community ownership over the building. "They're not just audience members," McClelland says, speaking of the audiences she's seen attend shows at the Buskirk over the years. "They're audience members one month, and then they're performers the next, and the third month they're coming to see their child perform, and the fourth month their next door neighbors have done something, so this building then becomes just a natural part of going out."

The Making Of An Arts Incubator

Beyond providing quality entertainment for the Bloomington community, Danielle believes bringing acts like Pig Pen to Bloomington will help the city's professional arts scene by creating connections between visiting and local artists. McClelland also feels the Buskirk Chumley theater can provide a unique opportunity to Bloomington: to become an incubator for developing theater work. "So we're creating a consortium of peer and aspirational theaters around the country who are our size, have similar kinds of programming needs, a similar type of market, who are also in secondary cities, with the idea that we might then be able to have a network where a new show can go in development in any one of those consortium theaters, for rehearsal, production, fine tune the show, initiate it, and then have a tour, through these cities," McClelland says. "There are a couple of shows that are in development with the idea of then going to larger theaters in Chicago, and then going off Broadway in a smaller house, so not Broadway shows but shows that could be longer running in smaller houses, and take this sort of little mini tour and actually get a good showing."

Looking At Development In A Different Way

Pig Pen Theater Company is both a band and a theater company. After they released their first album, their music gained such popularity that they decided to tour as a band. Why not do a bit of their theater on tour, I asked… "We can't fit all our puppets, plus all our musical instruments in the car. Plus, there's seven of us so it gets pretty crowded in there," says Pig Pen Ensemble member Curtis Gillen. Make no mistake, though, the company has been using their tour time to develop their new play, "The Hunter and the Bear." This winter, after this leg of their tour is over, the ensemble will head to the Writers Theater in Chicago to workshop the play. They seem very excited by all the opportunities that exist for companies like theirs to workshop new theater pieces in small, regional theaters, like the BCT. The Pig Pen ensemble members admit that developing work in New York City, where the group is based, can be costly. Paying for rehearsal space alone can drain an up-and-coming theater company of much of its budget. The guys joke that when the company was younger and not as established as it is now, at one point the seven members all shared a one-bedroom apartment. Ensemble member Alex Falberg spoke about how many artists in New York are searching for resources within the city, when they could find exactly what they needed for less months just outside of it. "New York I think is still a really great place to come and sell something, but a really hard place to actually cultivate something, although it's an extraordinary city and it's been really kind to us," says Alex. "So I think one of the greatest things we've found in our travels is the.. I think amount of space and resources that are out there that are looking for new playwrights and material and content, to generate..." he says. "There's a real power in taking your story around the country and letting people hear them and have them and share them with their communities," says Pig Pen ensemble member Arya Shahi. "So I think development can be looked at in a slightly different way" he says, ".. it's not trying to get ready for New York it's just engaging in different communities and allowing them to own your story as much as people in New York or Chicago."

It was the night of the show, and the theatre had already guaranteed a modest crowd; "We have 100 tickets pre-sold!" Arya told me "That's amazing, for a bunch of people who may not have ever heard of us. We're really excited to meet them all." After a set by Bloomington folk-rock band Busman's Holiday, Pig Pen took the stage. By the end of the show, nearly everyone in the theater was on their feet, and the band came out to play an encore. In the lobby later, the band was very busy at their merchandise table, and other band members were talking to audience members who were enthusiastically describing their experiences. The band was making the connection they were seeking. The day after the concert, in a text Pig Pen ensemble member Arya sent me, he said ‘We'll be back to Bloomington ASAP.'