Jan Karski, A WW II Hero To Many, A Failure To Himself 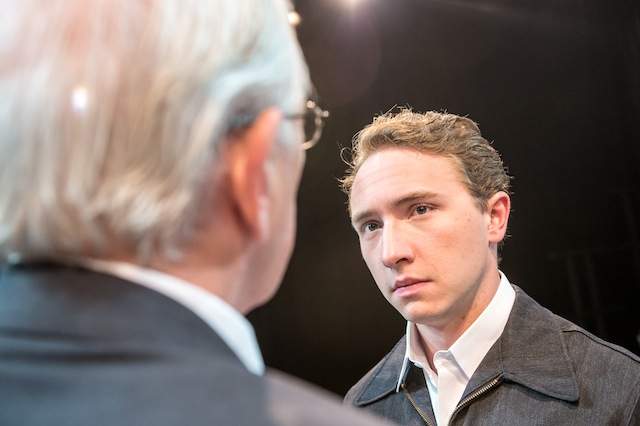 Coming to See Aunt Sophie at the Crossroads Repertory Theatre in Terre Haute is a wonderfully dramatic, meaningful, involving and thought provoking play. Arthur Feinsod's very well thought out and thought through play dramatizes the life of Jan Karski. He was a Polish Catholic who was a World War Two spy and courier for the underground. Karski  password was "Coming to See Aunt Sophie," as he carried the news of the ghettos and the concentration camps to England and America. In England despite a long wait, Karski failed to meet Churchill. He then came to America. While he did meet with President Roosevelt, Karski always blamed himself for being too awed and too polite to make the case to save the Jews more forcefully.

On the bare stage of Indiana State's New Theatre it's 1985 and Brad Venable as the seventy year old Karski is being filmed for a French documentary on his life. As he hesitantly speaks Andrew Behling joins him across the stage as the young Karski and four actors begin to appear as seventy of the various figures from his life. Molly LeCaptain is his frightened sister, a traitor, and a sympathetic nun. Rob Glidden is a peasant who takes him in and one of the Jews who persuades him of their peril. Jomar Ferreras is a Polish priest who gives the young Karski a communion wafer instead of a cyanide pill as a talisman and a Spanish border guard who helps him on his way. Julie Dixon is an inspiring Polish author and firebrand, and the older Karski's vigilantly protective wife. Jason Bowen is the film maker, a rough Wild Bill Donovan of the war time OSS and, with just a pair of pince nez and an attitude, the awe inspiring FDR.

Coming to See Aunt Sophie with its small cast plays out on a bare but comfortable set. Two benches where the supporting players sit between scenes flank a table in the background. Katerina Papadatos' costume elements and Rachelle martin Wilburn's props are neatly arranged. There are just a couple of chairs in the foreground.  The backdrop is a much battered wall decorated with swastikas, handbills and a replica of the sign that hung over the gate of the concentration camp at Auschwitz. Scenic design is by Ann Warren. Bob Holton is the scenic artist.

Dale McFadden directs the older Karski, the young Karski and the four actors who play the seventy other parts of Coming to See Aunt Sophie with wonderful facility. The action flows from scene to scene as the actors don a hat or a scarf of a small bit of costume to take their parts. There are tense moments, relaxed moments and even just brief thoughtful pauses in action that always kept the audience's attention and involvement.  I especially enjoyed a couple of times when the older Karski and the younger Karski spoke to one another. The elder berating the younger for remembered brashness and the younger accusing the older of being too grown up. McFadden also directed the original production which had its premiere in Germany in May and then toured in Karski's home country of Poland

Arthur Feinsod's Coming to See Aunt Sophie at the Crossroads Repertory Theatre in Terre Haute has performances on July 6th, 19th and 22nd. Following the matinee on Sunday the 6t E. Thomas Wood co-author of Karski: How One Man Tried to Stop the Holocaust will be at the theatre to discuss Karski's life.

Coming to See Aunt Sophie will also be performed at four other locations around the Terre Haute community – at Catholic, Jewish and Unitarian religious communities as well as at the Candles Holocaust Museum.