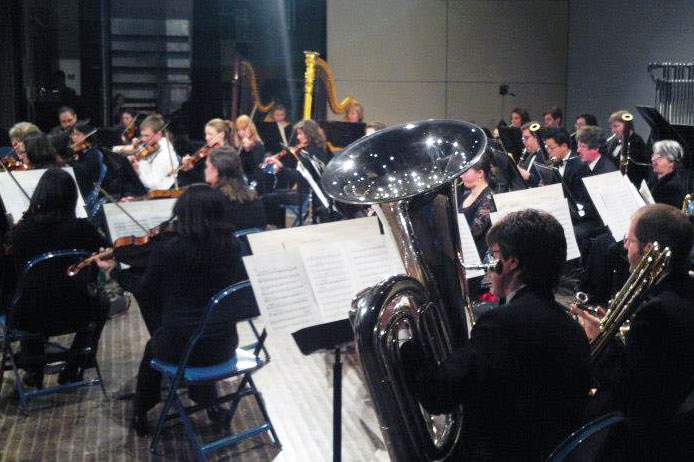 The first piece on the upcoming Columbus Symphony Orchestra concert is a standard The Overture To "The Magic Flute." But that's where the familiarity ends.

There are two pieces by Michael Schelle, composer in residence at Butler University; a piece written in 2005 by young composer Aaron Krerowicz; and the symphony is by Vasily Kallinnikov, an obscure Russian composer who died at the turn of the 20th century.

Andrew Lyon chose the repertoire. He's also the conductor for this concert.

"I feel an orchestra cannot grow, cannot sustain, especially nowadays, without bringing in new blood of all types, not just audience but with composers as well," says Lyon.

He is one of five finalists for the position of Music Director. The winner will be only the group's sixth director in its 92-year history.

Patrick Vogt agrees that the orchestra needs to bring in new blood, but he means in the form of new musicians. He joined the symphony's horn section in 2012. "And I was immediately welcomed into the group, made a bunch of friends, and I'm still playing with the orchestra to this day and hope to for many years."

Vogt is a volunteer musician, like the majority of his colleagues. There are about 35 players who consistently show up to CSO rehearsals. Violinist Laura Andrews says attendance has been especially strong this season as musicians are enjoying evaluating the conductors.

She says the search committee is challenging candidates to think long term. "Not just, ‘Next year I would like to do this,' but, ‘I'm hoping in five years, our organization will grow by this membership, I would like to double the size of our orchestra,' that really have concrete, long term goals. That's something we're looking for but we can't require," says Andrews.

The CSO's first two music directors led the orchestra for a combined 70 years. Their last music director, Roger Kalia, was only in the position for four years while he was a student at Indiana University.

Charles Latshaw is also an IU grad who held a conducting position with a volunteer orchestra. "I would consider this both a teaching position and an artistic position," says Latshaw, who was the artistic director of the Bloomington Symphony Orchestra for six years.

When he left the BSO for a position at Kent State University, Latshaw recommended the orchestra hire the best person for the job at that moment. "I always felt like it was much better to have a really really great conductor for a short time than a mediocre conductor for a long time," he says.

The orchestra's weekly rehearsal is about to get underway in the Central Middle School band room. Today, they'll be doing some hard work on the Michael Schelle pieces.

There's one member of the orchestra who's worked with all five of the CSO's former conductors cellist Ginny Rouse. She was recruited to join the group by its founder, first conductor and violin teacher Chester Kitzinger. Rouse met him when she signed her daughter up for violin lessons. She also played violin at the time, so she brought along her instrument to play a bit during her daughter's lessons.

"The next time I went, he said ‘Why aren't you playing with the symphony?'" So she joined, "And we never had enough cellos, so I decided to learn how to play the cello."

She's been playing cello with the Columbus Symphony Orchestra for 62 years.

Regardless of how long the next Music Director sticks with the CSO, committee members agree that one of their primary tasks will be to recruit new blood to join stalwarts like Rouse.