The Collective Press: The Power Of Positive Printing 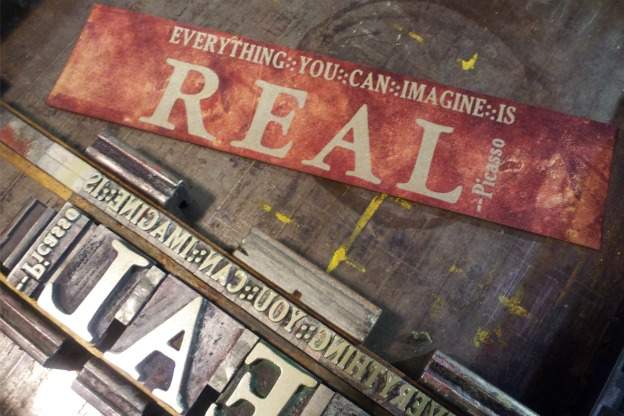 For anyone who endured the seventies, motivational posters are about as appealing as double-knit polyester and TAB. You know-"Hang in there, baby," with that cute kitten hanging from the branch? Groan.

So how is Kim Ransdell's new take on the genre any different? Although her literary sources are more credentialed and her process more artistic, these are motivational posters, no two ways about it.Â Take, for example-

"My heart tells me to advance, and expect a thousand happy events." (Cervantes)

"The truth alone triumphs." (The Upanishads)

On many of the posters, underneath these quotations, the same three words recur as a background layer.Â They happen to be the first words Ransdell ever printed.Â She was helping her mentor Amos P. Kennedy, Jr. organize his studio when he asked her to try her hand at the letterpress.

"It took me a minute to figure out what to say," Ransdell recalls, "but then I realized that the most important thing that people need to think or feel is, 'Never give up'."

In a visual landscape littered with commercial signs, Ransdell recognizes the value of a different kind of message.

"You run into so many signs that tell you you're not good enough; you need this to make you happy; or your life would be complete if you were this way or you looked that way," explains Ransdell.Â "It's really necessary for people to have equal amounts of positive messages coming back at them."

What makes the message even more unexpected, is the medium that conveys it.Â Ransdell uses the historically commercial, or industrial technique of letterpress to create her artwork.Â The magnetic sign press in her studio is the type a department store would have used in-house to create flyers for sales or special promotions.

The technology isn't terribly different from what Gutenberg used in the 15th century to print the Bible.Â Ransdell arranges wooden and cast iron blocks of moveable type on the press, inks the raised surfaces by hand, and presses a sheet through.Â She will often run the same 12 1/2 by nine inch sheet of chipboard through the press four times, starting with a block of color and continuing with multiple impressions of type.

I feel like there are souls in the presses and the type itself.Â It's such a powerful medium because of the connection with these physical objects that were used by so many other people.Â That's something that cannot be replicated with computers.

The Aura Of Letterpress

The degree to which Ransdell manipulates each print steers the process away from its roots in mechanical reproduction.Â Each print, individually inked and pressed, becomes a unique art object, full of texture and dimensionality.Â The sheen of the ink contrasts with the rough surface of the chipboard.Â The irregular letter forms emboss the print's surface.Â The artwork that results has more affinity with painting or collage than the commercial poster medium of lithograph.

Ransdell first learned letterpress as a graphic design and painting major at Indiana University from 1997-2001, when she studied with Kennedy.Â She kept in touch with her professor after he left IU, eventually making regular visits to his rural Alabama studio to further her education and work part-time as his studio assistant.Â In the meantime, she started The Collective Press, silkscreening gig posters and t-shirts, until her love of letterpress took over.

For someone who's long collected quotations and practiced calligraphy, falling in love with moveable type was a natural progression.Â Ransdell relishes the ease with which she can pull a print, and the superfluousness of computers to her operation.

Her studio on West Fourth Street in downtown Bloomington is an homage to retired technologiesfrom the magnetic sign press to the antique metal cabinet, whose slim drawers are labeled with names of fontsCaslon, Futura, Garamondwith the corresponding letters inside.Â Unlike names on a drop-down menu, however, real objects tend to get misplaced over the years, so there's inevitably plenty of mismatched type.

Ransdell admits that most often it's this "bastard" or "orphan" type that appeals to her.Â "Because I'll want to pick out this particular beautiful B."

The medium, for Ransdell, is clearly as compelling as the message.

"I feel like there are souls in the presses and the type itself," Ransdell explains. " It's such a powerful medium because of the connection with these physical objects that were used by so many other people.Â That's something that cannot be replicated with computers."

In fact, there's something about the letterpress process itself that tends to reinforce the messages that Ransdell sets in type.Â Having learned to practice a mantra as a follower of Nicherin Buddhism, she has come to realize the power of repetition.

"So as I'm printing these, it's very laborious, very physicalI feel almost like a workhouse, just churning away at these things all day long"Never Give Up" is a mantra that I'm repeating to myself," reveals Ransdell.Â " Because that's what it takes sometimes: to actively insert positivity in your head.Â Because there are so many things around you that are just saying that it's not worth it, just give up, don't wake up, don't even try.Â So printing these is an affirmation."