Collected Stories: Being The Voice Of A Generation Is Hell! 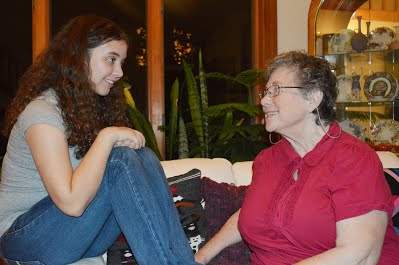 Donald Margolies' Collected Stories is a play with wonderfully complex roles for an older and a younger actor. Ute Hagen, Linda Lavin and Helen Mirren are just three of the distinguished actors who've played the part of Ruth, the established older writer mentor. They've had some very fine partners in the role of Lisa, the aspiring grad' student.

As the play begins, Ruth has invited grad student Lisa over for a tutorial. Ruth is an animated and thoughtful teacher of a rather dignified sort. At first Lisa is very much in awe of the older woman.

As she relaxes a bit Lisa even puts her feet up on the couch. It's a surprise to the audience and it may be director Darrell Ann Stone's tip off about what's to come.

Ruth offers help and counsel to the young writer as they work closely together, but Lisa pushes a bit ahead. She makes successful submissions, first of a story and then of a collection. Ruth is congratulatory, but actually a bit miffed by her tutee's independence. Lisa's collection is a great success and she's dubbed "the voice of a generation."

Lisa complains to Ruth that being "the voice of a generation, is hell." She confesses that with the collection, she's exhausted her own background and simply is at a dead end. The energy that fueled her collection is gone and she just isn't angry anymore.

Feeling the pressure to follow the stories with a novel, Lisa writes a thinly disguised account of the stories that Ruth has shared with her. Ruth is furious. She feels betrayed and violated. In a powerful scene, Lisa claims that she's done what Ruth counseled, that the story "grabbed" her.  Ruth angrily replies, "It didn't grab you, you seized it."

The encounter opens both Ruth and Lisa for heated arguments and some wounding and wounded language. It's to author Margolies' and the actors' credit that who's right and who's wrong is far from clear. What's important is how much more deeply we see and understand the characters. I'm betting that different audience members will come away with different takes on Ruth and Lisa's deeply felt positions.

Darrell Ann Stone has skillfully blocked the overall flow of Collected Stories with plenty of movement in the small space and great attention to the small touches of the many moments of the drama. Jeff Stone designed Ruth's comfortable apartment set.  It's nicely furnished by Anne Steigerwald. Appropriate, varied and, on occasion striking costumes are by Judy Downey. Everything is in place and on time for the production courtesy of stage manager Lori Garraghty

There are just two more performances of the Jewish Theatre of Bloomington's production of Donald Margolies's Collected Stories, Thursday the 29th and Saturday the 31st at 7:30 in the intimate Rose Firebay of the Ivy Tech John Waldron Arts Center.