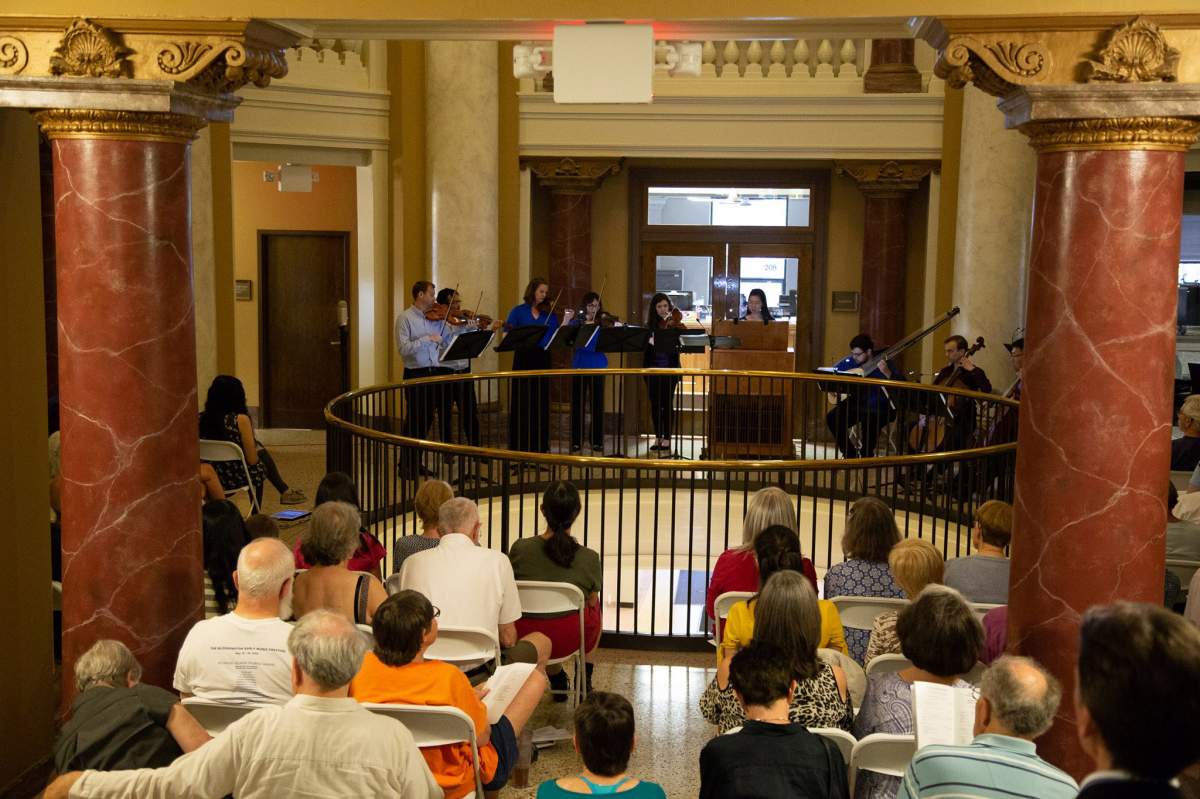 The Bloomington Early Music Festival is celebrating its 25th year with a nine-day lineup featuring musicians, academics, and ensembles from all over the world. What sets this year's festival apart from previous years is not only its number of events but also some new collaborations, some of which took many years to achieve.

"It was put on originally by a group of students in the then Early Music Institute, now the Historic Performance Institute," says Alain Barker, President of Bloomington Early Music, "who felt they really wanted to connect to the community with what they were doing as artists."

"Historical performance is a term that we use these days for being able to reconstruct music as it was performed, say, 300 years ago "says Dana Marsh, director of the Historical Performance Institute and chair of the Early Music Department at the Jacobs School of Music. "What we do in historical performance is we aim first for the instruments that Bach would have had to work with and we know this through surviving copies of instruments, artwork, and iconography that shows us very exacting representations of those instruments."

To kick off this year's Festival, The Bloomington Bach Cantata Project performed J.S. Bach's Cantata 66, originally performed in Leipzig, Germany in 1724. Unlike many modern Bach cantata performances, this group assigns one person per part16 musicians in alland plays on historic instruments. Research suggests that this was the type of ensemble Bach would have worked with to create these cantatas.

"When Bach got to Leipzig in the summer of 1723 to take up his job as head city musician and head church musician," says Daniel Melamed, a professor of Musicology at the Jacobs School who gave a brief lecture about the historical context of Cantata 66 in between two performances of the work, "he all of a sudden was faced with a responsibility of providing this kind of music every week, and he needed a repertory of pieces that was exactly suited to the place in its length, and in the kind of text it set, and the performers it was designed for."

The festival continues through Sunday May 27th with performances from community members and students from the Jacobs School of Music. But this year  you'll also see performances from ensembles like the Sacred Music Project, Les Ordinaires, the Bloomington Quarry Morris Dancers, and Early Music America's Young Performers Festival, featuring student ensembles from Oberlin, Peabody Conservatory, Case Western Reserve University, and the University of Southern California.

"It's been a real privilege to be able to be part of the revivification of the festival," Says March, "and I know that my colleague Alain Barker who directs the festival would agree that we're really making a quantum leap this year through this very special collaboration."

"What's happening this year I think more than ever is this excitement about collaboration," says Barker, "the fact that all these groups are actually coming together to create something that is greater than anything they could produce on their own."

In years past, Early Music America had its annual festival in either Boston or in Berkeley, California. But it became clear that Bloomington is ready for the spotlight and is the perfect place to begin expanding the showcase of the newest innovations in Early Music.

"Historical performance has a very special home in Bloomington," says Marsh."On the one hand you have a world-class music conservatory, but it's situated on a leading public research university, and in historical performance you need both the research and performance side of the discipline to make it work. You can't have one without the other."

The Bloomington Early Music festival continues through Sunday, May 27th. The concluding weekend's events include the EMA showcase concerts on Friday and Saturday night at 7:00 in Auer Hall, which is also the venue for BLEMF's concluding performance of the Festival Orchestrafeaturing violinist Ingrid Matthews and Harpsichordist Jory VinikourSunday night at 7:00. All events are free and open to the public. For a full list of upcoming performances visit BLEMF.org.