"Comedy Tonight:" Colin Mochrie and Brad Sherwood at the BPP

I'm talking with Brad Sherwood, Brad. Tell us a little bit about your background.

Brad Sherwood: I started acting when I was eight years old and went to college for it and did a lot of theater and musical theater moved out to LA to pursue my acting career and got into comedy and started doing improv real soon. Once I got out there, I played in clubs and theaters and then eventually got on. Whose Line is It Anyway.

Brad: Colin and I've been touring together, doing our two men live show in theaters for about 19 years. The promoters who sent this out on tour asked us to come up with a zoom show. Can you guys somehow make your show translate?

George: So basically, sketch comedy, but it's zoom, it's interactive.

Brad: Weatherman technology of green screen and have sort of used it as much as we could to our advantage, and you can put anything behind you. And it's all and it's all improvised as well. We get suggestion from the audience, just like on Whose Line and so we talked to audience members. Sometimes we have them in the scenes and so all the premises for the scenes are based on suggestions from the audience.

George: So really, on the 20th and 27th it could be quite different shows.

Brad: Everything that we say during the show is completely different. Every time the setup is the same, so we will be doing like a commercial about a snack. But before we do that, we get a suggestion from an audience member of a food that they really don't like, and we have them make up a name for that snack. Sort of using the like last week it was tuna. That, they don't like tuna fish makes sense.
How about tuna bites? That was the starting point. Everything we said in that scene will never say again in a later performance.

Brad: Here's the one where we're solving crimes and we wear these little bodies. We do it like it's a children's show, except that we're solving a murder, so it's kind of like, you know a Saturday morning children show, except someone in town was killed, so we get details from an audience memberm and then we end up going into their house. We're on green screen.

Brad: But we can have the background of the viewer broadcast into our screen. If you were watching the show, we could then come up. You would be me and I would be here in column would be here and we be talking to you and it would look like we're sitting next to you in your den. We thought well, what if we put the viewer who's watching us on zoom behind us? Then we could sit here and talk to them.
It's really been fun, so we are basically innovative this because you know, the zoom technology is really just about having sort of a group meeting. We wanted to take it further so that it's visually compelling for the whole audience.

George: Wow could be Colin on one side.

George: You on the other side and me in the middle.

George: So, you've been really working with zoom technology and with green screens. And picking up from our friendly weather-person, if you will.

Brad: It took four months to build all the ideas and technology and sort of perfect them. The games that we like worked really well.

George: You develop this during the pandemic.

Brad: We started doing this show in around September and we're still coming up with new things all the time, and we talked to the guy that runs our tech and will have an ID and he'll say well maybe we could do it this way or I say something like are we able to do dot dot dot and then he goes? Right? I think maybe... and then.

A whole new game comes out of it. It's been fun, it's sort of. It's like opening a box of parts that you don't know quite how they work and then starting to put him together and sometimes your innocence or ignorance. Things have a way to use them in a way that no one else would think of because they just already know what something can do.

George: Well, that sounds like wonderful fun and it sounds like the Bloomington Playwrights Project is going to hold a stream of consciousness. With Colin McRae and Brad Sherwood on Saturdays, March 20th, and March 27th. Should be great fun. 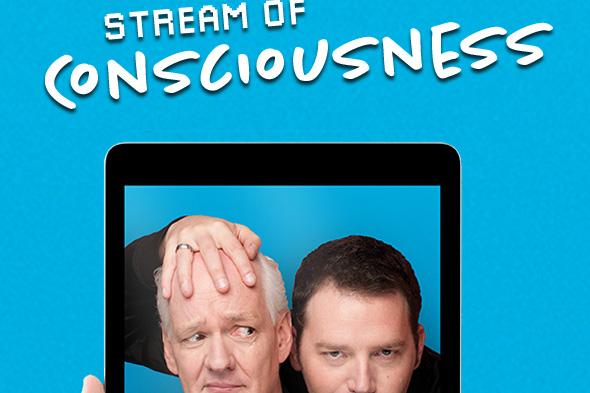 A pair of comics from "Whose line is it anyway?" presenting evenings of irreverent humor that simply bubbles with whip smart and off the cuff entertainment from the Bloomington Playwrights Project on Saturdays March 20 and 27.

Tickets are available through the BCT box office for this event.