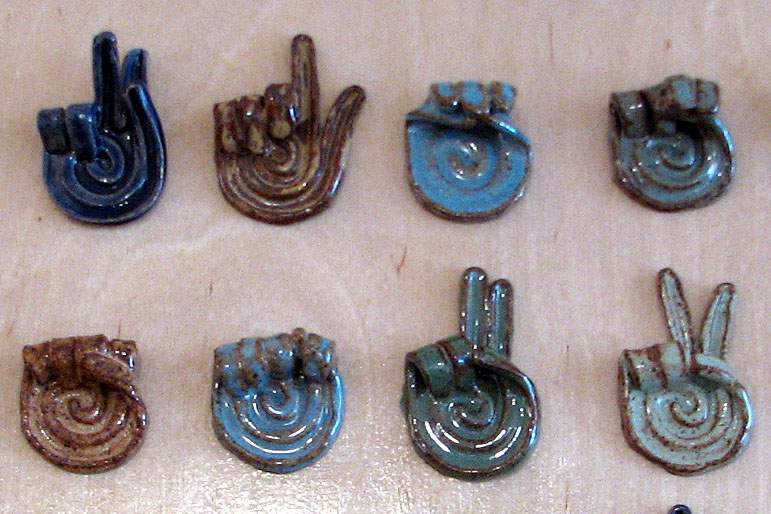 Deaf theater is a performance practice that functions as a part of deaf culture. According to the online resource ASL University, the history of deaf theater goes back to the early 20th century, but it didn't garner national attention until the 1960s. This is when the National Theatre of the Deaf was formed.

Today, the National Theatre of the Deaf tours the country and deaf theater is taught at universities such as Gallaudet University in Washington D.C. and in schools like the Indiana School for the Deaf.

Colin Analco is a performer and an instructor at the Indiana School for the Deaf, or the ISD. He moved to Indiana with his parents when he was young so he could attend the ISD.

"I've been performing since I was about 3," Analco explained.  (Analco's wife June served as an interpreter for this interview.) "My parents had always encouraged me to try new things.When I began translating things like poetry, that is when it all became so fascinating to me."

Here, Analco performs the poem "Snare of the Arrow:"

If you follow the movement of Analco's fingers, you'll notice that they tick up sequentially at different moments. It's very fast, but you can see it.

Deaf performances of poetry can have self-imposed limitations to convey meaning. In written poetry, on might create a limitation on meter or rhyme pattern, but in this performance of "Snare of the Arrow," a limitation is imposed on the hand as the fingers tick up in sequence.  It's a way of communicating larger ideas through an economical language.

Deaf theater provides the opportunity to combine choreography and literature to create a unique means of expression.

Analco explains it like this: "For example if you move your face [from] happiness to sadness, it's not believable. But if you actually show your entire body [changing from] being excited into sadness [or] into a disdain[ing] characteristic, everything around you changes in that moment.  And when the things around you change, the audience feels that emotion through your gestures."

Analco goes on to tell me a story of how effective this technique can be in garnering an audience's reaction.

"There was one play over at Gallaudet [University] called Noises Off. My character was Selsdon. He was a very, very old man. He loved whiskey. He loved to drink, and he drank it often. My director didn't give me any feedback, any criticism or anything. My character was very comedic, and I kind of noticed, 'OK. If I'm not getting any reaction from my director, would I get any reaction from the audience during that play?'

"So, I went ahead and I performed as the character, and actually, my character was very comedic, and there's actually one part where I fall out a window and fall down the other side, and the audience actually laughed so hard that I could feel the stage vibrating - the wood slats on the floor. Oh my goodness. What an ego boost! It wasn't just one or two times, it was probably about five times throughout the entire play that I could feel the audience laughing so hard."

Despite his director's silence, Analco took the shaking floorboards as a sign of success.