Clue: The Musical - A Review 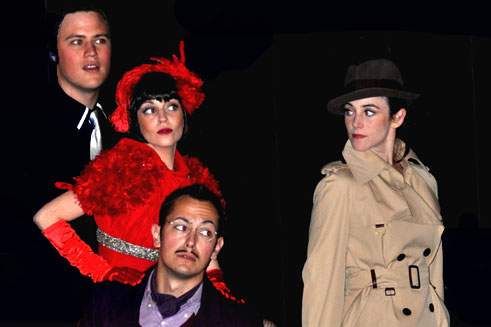 The Shawnee Theatre in Bloomfield opens their six play summer season with Clue: The Musical directed by Jerry Morrison with music direction by Justine Adams. Now, whenever I get out the Parker Brothers' board game, I'll know exactly what each of those characters looks like with their colorful costumes by Gene Salgado.  And I think that I'll remember a bit about each of those clever rooms designed by Stefan Azizi as well.

The show began with a quick introduction to each character: the doughty colonel, seductive Miss Scarlet, overworked Mrs. White, over educated Professor Plum, too often married Miss Peacock and the mysterious Mr. Green. Then, our host, a Mr. Boddy played with grace by Royce Hufford appeared. He asked three members of the audience to pick cards from the set of suspects, rooms and weapons. Boddy stashed their choices in the traditional envelop and the game began in earnest.

As Clue: The Musical went on we learned more about each character and their relation to Mr. Boddy. It seemed everyone has a deep seated grudge and a familiarity with at least some of the weapons. By the end of the act, someone had done him in, in one of the rooms with one of those weapons.

As the second act of Clue: The Musical began a new character appeared. It was a tough talking, game cliché and literary quotation spouting detective skillfully played by Dakota McGee. Her character doesn't appear in the original game, but fit right in. Like the detective, all of the characters in Clue: The Musical were well acted and memorable.  Sunday afternoon I especially enjoyed Cate Davison as the sultry Miss Scarlet and Heather Lawler as the cheerfully aging Miss Peacock. By the way Lawler choreographed some of the numbers. The cast's singing and diction was very good, but the music frequently overpowered the voices.

Despite the fact that he was clearly demised, Mr. Boddy continued to be our host and dropped rhyming clues to the game's outcome as the second act went on. At the end of the show, he asked those of us who had guess correctly to stand and about a third of the audience did. I'm a little embarrassed to confess that I wasn't one of them. By the way, Professor Plum was the murderer in the conservatory with the wrench.