For those of us in the WFIU offices, a day rarely by when we did not see our own John Bailey clutching a can of his favorite drink, TaB. TaB is a diet soda that most people assume was discontinued decades ago. After years of languishing at the far end of the soda aisle, TaB has at last fallen victim to a decision by its parent company, Coca-Cola, to end production. And John felt compelled not just to find a new source of caffeine, but also to confront the nature of his reliance on a product that only a few found easy to love. Here's John.

It’s early on a Tuesday morning in Bloomington, Indiana, winter of 2014. I’m scanning the soda aisle of the grocery store I frequent, and I look up and meet the eye of my Coke dealer — you know, the guy from the Coca-Cola bottler who restocks the shelves. He knows why I’m there — to haunt the narrow space reserved for my beloved diet soda, TaB. And he can see that I’ve just found that space supplanted with some other, newer arcane cola — Diet Coke with lime, sweetened with Splenda. Even the little sticker on the shelf with the TaB logo on it has been peeled off. He anticipates an anguished query from me, and pre-empts it. “TaB will be back,” he says. “An old lady came by and cleaned us out yesterday. We just have to get some more from the regional bottler in Louisville.” “Thank God,” I say. “I was afraid I was the only one in town still drinking it.” My dealer’s flat affect doesn’t change. “Nah,” he says. “We’ve got about four.”

In a town of about 80,000, I was one of about four. Four keepers of a white-hot flame in a hot-pink can. For decades, TaB was my constant companion. I used to consider it my most successful long-term relationship. And now, having consumed all the TaB I will ever drink, all that’s left for me to look at is the bond. You can pack a surprising amount of obsession and loneliness and anxiety into a 12-ounce can. And only when you spill it do you feel how sticky it all is.

I never believed that the drink I loved unconditionally was good for me, or even … you know, good. TaB appeared in 1963 as the first diet soda intended not for diabetics, but for people who were dieting. It was Coke, but minus cane sugar and plus an OG sweetener – initially cyclamate, until that was outlawed in the ’70s due to its effect on lab rats. Saccharin followed; and in the ‘80s the saccharin was cut with NutraSweet, a blend that held firm until TaB was discontinued in 2021. Through all its iterations, the flavor profile was dominated by a back-of-the-tongue bitterness that resisted being brushed entirely away. The writer Mark Leyner referred to the drink as “robot sweat,” and likened it to raw sewage. The comedian Bobcat Goldthwait speculated that its main ingredient was battery acid. Their remarks carried the ring of truth, even among diehards like me. It was the perfect beverage to keep in a work fridge – rarely was anyone tempted to pilfer it, eager as I was to share it. A couple of times I asked one friend whether I could offer him a TaB, and each time he shot back, “You can offer!” TaB was, by almost any measure, gross. It was known to be vile. And it was mine.

For some time, starting at a young age, I held it as a secret vice. My first dalliance with TaB occurred in about 1980, when I was five, and it was in its second decade as reigning queen of the low-cal colas. Its crown had yet to be snatched by Diet Coke, a new product soon to be made by the same company and bearing the flagship name. TaB seemed exotic to me, not least because it was understood in my household to be forbidden. Eager as my mom was to restrict the sugar intake of everyone in the family, she reserved TaB as her own treat … so I surreptitiously swigged straight from the two-liter when no one was looking. This was entirely on brand for the emerging binger that I was – sneaking slugs from the gallon of whole milk, smuggling in Zingers I’d scored for a quarter from the day-old Hostess outlet. Eventually I became, in effect, a supersized version of the kid who raided the family fridge … and my behavior continued even after the fridge became my own. By adulthood, the irony of my conspicuous consumption was laid bare – the diet soda I was quaffing with abandon could not do its job entirely by itself.

TaB fell out of my life for some time, as my mother and I both began seeing other sodas … and I was hardly the only one to stop taking notice of it. Coca-Cola pulled its advertising dollars for TaB in the late ’80s. Its hardcore adherents, though, insured that it took years or even decades to disappear from store shelves in most towns. That allowed me to rediscover TaB in college in the mid-’90s – and my curiosity about a now-obscure drink quickly flourished into a kind of dependency. I started buying it wholesale from my area Coke bottler, which manufactured it for a while even after retailers stopped ordering it. And, when that connection ran dry, I would drive two hours or more to a larger city and raid the shelves of several supermarkets. I knew about how many 12-packs I could fit in my Corolla – a little bit of trunk Tetris could push the figure well north of 40. Upon moving from Missouri to Indiana in 2010, I acquired my first vanity plate. It read “T-A-B-H-N-T-R”: TaB Hunter.

As I became increasingly caffeine-intolerant, my consumption of TaB waned – my daily six-plus, consumed at all hours, turned into one or two, mostly at the office. But, my being seen so frequently with TaB, compounded by my tendency to collect and retell stories about it, announced what might have been called an addiction. And, like so many addicts of all stripes, I had enablers. Every mother-in-law figure in my life who could find it, procured it for me. When Coke announced in the fall of 2020 that TaB would at last be ending production, mere acquaintances on social media rallied around me. The next spring, one person, who I think I had met only two or three times, found 33 12-packs in Chicago, had them all driven down to me, and refused reimbursement. That was the stash I nursed for more than a year until this summer, when the well ran dry.

And many people who did not gift me the soda itself went out of their way to grant me swag: vintage print ads, pendant charms, fridge magnets, t-shirts and hats, and those 1970s hourglass-shaped TaB-logo drinking glasses you’ll find in any flea market and only there. There was one thing I wouldn’t shut up about – and at least that made my loved ones’ gift shopping easy.

It was through sheer volume of communication that I had unwittingly – I think – come to stake my identity on a beverage that people of a certain age considered a punchline. Some people begged me to come clean, sure as they were that my omnipresent can and steady stream of stories represented an unwavering commitment to a performance-art bit. Surely, they thought, he couldn’t like TaB that much. One person very close to me confided in a mutual acquaintance that she sensed I didn’t genuinely like to drink it at all – that, at root, my TaB interactions were about collecting the reactions of the people in my midst. The charge rattled me. And I was hard-pressed to mount a real defense. Across the last 25 years I drank well over 20,000 cans – that should have spoken for itself. And the nervous person in me liked that any one of those cans, consumed in the presence of another, could become a conversation piece. There was no dead air in a can of TaB.

There never did seem to be a shortage of discussion – but, a couple of days before turning 47 in August, I steered decades of decidedly one-sided talk on this topic toward a close. I hosted dozens of friends on Facebook Live for a valedictory event in which I shared some of my old set pieces a final time before their retirement, while nursing my final two cans of TaB.

Faced at last with this loss after years of borrowed time, of a steady conveyance of unnatural sweetness, I could not help but reflect. I think some of my acquaintances expected to see me melting down, perhaps into a sticky brown puddle. But I mainly felt relief – not least because the end of my stash was nearly 16 months past its sell-by date. The fizz was intact, but the drink had become, to invoke a wine term, corked. Toward the end, its flavor profile recalled nothing more than the scent of my father’s English Leather aftershave – a sense memory that, notably, had lain dormant since around the time I was first drinking TaB.

At the end, I drank it much for the same reason I had started all those years ago. I relied on this diet soda to try to fill a number of voids. The absence of this flawed piece of the past is pushing me a bit more to inhabit the insecure present. As with any relationship, though, I will miss it. Little as it might have done to bring out the best in me, I did love TaB, from the first sip right up to the bittersweet end.

That was WFIU Station Operations Director – and my boss – John Bailey. You know I gotta say, the beginnings of our staff meetings are just not the same without the sound of that can being freshly opened. We miss you too, TaB. 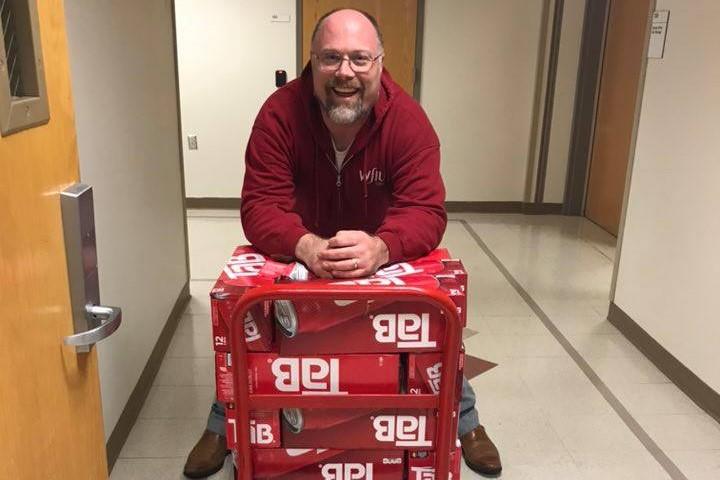 John Bailey on a cart of TaB (Courtesy of John Bailey)

For those of us in the WFIU offices, a day rarely went by when we did not see our own John Bailey clutching a can of his favorite drink, TaB. TaB is a diet soda that most people assume was discontinued decades ago. After years of languishing at the far end of the soda aisle, TaB has at last fallen victim to a decision by its parent company, Coca-Cola, to end production. And John felt compelled not just to find a new source of caffeine, but also to confront the nature of his reliance on a product that only a few found easy to love.
Support For Indiana Public Media Comes From
Tweets by wfiu