Clay Times Three: A Tale Of Art, Craft, And Resourcefulness 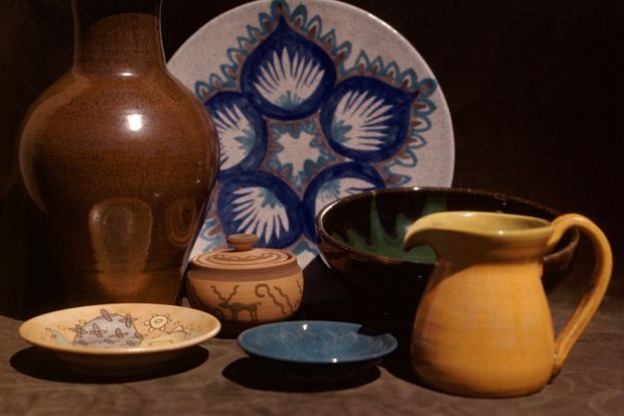 A columnist for Antique Week, Kathy McKimmie is used to dealing with rare artifacts and luxury items. In a book just published by the IU Press, McKimmie continues to research and catalogue valuable art objects, some of which belong to the Smithsonian, among other significant collections.

But, as the author reveals in her new book Clay Times Three, The Tale of Three Nashville Indiana Potteries, the origins of some sophisticated developments in ceramics were extremely down to earth.

Collectors of American art pottery-an offshoot of the Arts and Crafts Movement-may be acquainted with the work of Karl Martz, who started a pottery in Nashville, Indiana in 1935. For his well-crafted, one-of-a-kind pieces, Martz come to be accepted as an artist within the Brown County artist colony-the home of such painters as T.C. Steele, Adolph Shulz and Gustave Baumann.

But Martz's renown was wider than that. Sought out by Bauhaus Ã©migrÃ© Laszlo Moholy-Nagy during a stint in Chicago in the early 1940s, Martz was subsequently tapped to launch Indiana University's first ceramics program in the newly dedicated Henry Radford School of Fine Arts.

Devotees of art pottery along with Bloomington gallery veteransmay also be acquainted with Karl's wife, the artist Becky Brown, who was for several years a partner in The Galleryâ€“one of Bloomington's preeminent exhibition spaces from 1968 until its closing in 2004.

Karl and Becky Brown Martz are central figures in Clay Times Three. Perhaps one of the more interesting revelations of the book is the connection McKimmie establishes between the Martz studio and the Brown County Pottery, which was Nashville's first. When Walter and Helen Griffiths started that business, fine art, per se, was not their primary concern.

"Walter lost his job as an engineer and they lost their house in Milwaukee, probably around 1931," McKimmie explained. Looking for a place to make a fresh start, the Griffithses drew upon their resources a little financial support from family in Fort Wayne, Helen's fine art training, and Walter's engineering skills-to set up the Brown County Pottery in the summer of 1932.

"Brown County was the great leveler," said McKimmie, "because it didn't really matter whether you had a lot of money and were successful at what you did, or whether you had very little. Everybody was industrious, everybody worked, and people got along very well and helped each other."

The Griffithses' resourcefulness is perhaps best exemplified by their choice of raw material-the earth under their feet, free for the digging. Clay from Brown County creeks had a greyish-blue tint when it was unearthed, turning a rich terra cotta when it was fired.

The Griffithses hired local young women to paint the pottery's signature blue, yellow and green glazes, often incorporating natural motifs of Helen's design, and revealing the red-brown color of the fired clay along edges or as an accent.

The Mini-Factory That Could

Karl Martz was a chemistry student at IU when he apprenticed at the Brown County Pottery from 1934-1935. Although Martz moved on to pursue art pottery, it's hard to dispute the commercial success of the Griffith's operation. The scrappy mom-and-pop "mini-factory", as McKimmie calls it, was selling its wares at LS Ayres and Marshall Field's within a year of its opening, was featured in House and Garden magazine, and weathered the economic privations of the Depression and World War 2.

The business folded in 1953, after Helen and Walter Griffith had both passed away. In 1958, the pottery's main craftsman, Claude Graham, was recruited to help start up the Brown County Hills Pottery, the third of McKimmie's subjects.

"It's rarer than Brown County pottery, because Brown County Hills was not a production," McKimmie explained. "They didn't sell to department stores, or outside Brown County."

Writing the Book on Nashville's Potteries

Even less likely than a Brown County Hills Pottery whisky jug showing up in an antique store was the chance of finding a bibliographic source for this material, before McKimmie's book. Much ink, on the other hand, has been spilled about the Brown County painters, who themselves gave a nod to the area's thriving pottery trade.

"A lot of the artists painted the Brown County Pottery building," said McKimmie. "They also painted the pottery itself within their still-life pictures."

A Brown County painting collector, McKimmie was prompted to research the area's potteries. Discovering the literature to be wanting, McKimmie did enough digging into primary sources to produce her own book. Clay Times Three, The Tale of Three Nashville Indiana Potteries features hundreds of color photographs, the historical images of Nashville photographer Frank Hohenberger, and a fascinating story art, craft and resourcefulness.