Classical Music Teams Up With Architecture To Grow Audiences 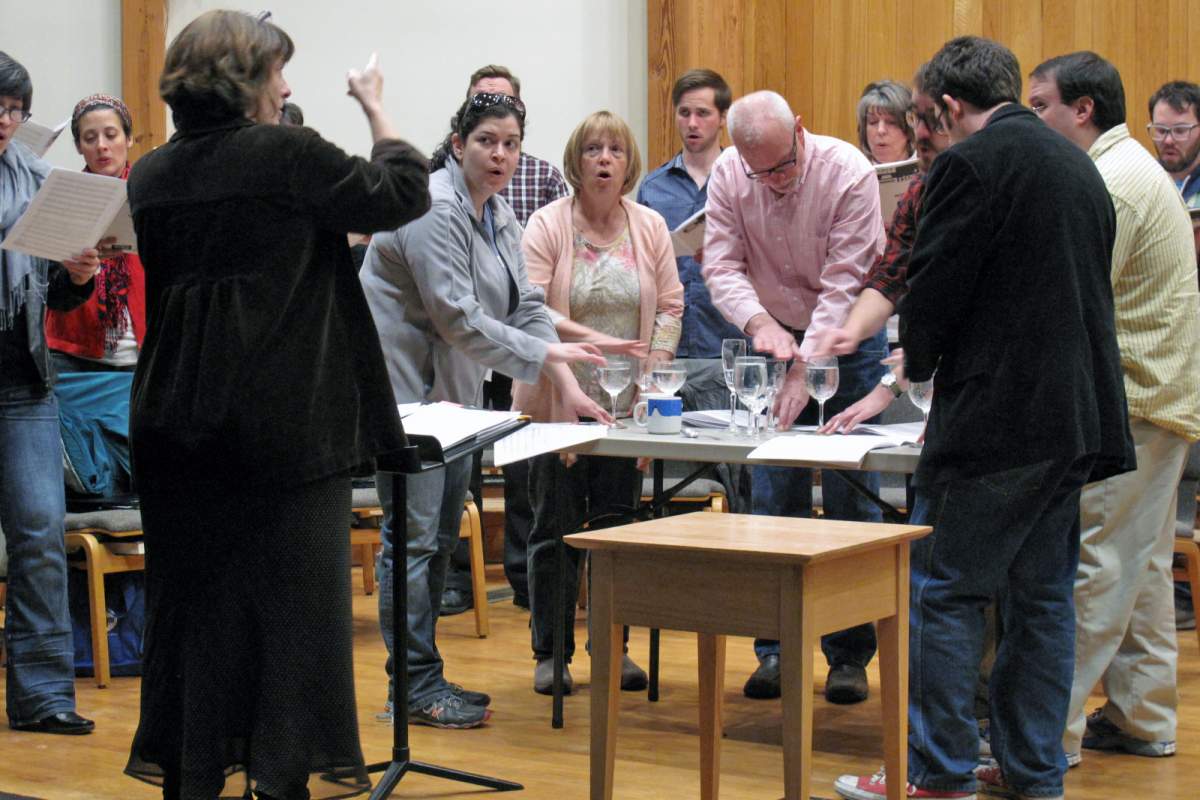 The photo at the top of Voces Novae's Facebook page captures the essence of the group the choir is singing in the Bloomington Hospital parking garage as a woman is perched on a wall, taking in the experience.

The Bloomington-based group has been taking classical music out of the concert hall and into everyday environments since 1997. Their spring concert will have several of Columbus' architectural gems as the backdrop.

Members of Voces Novae are starting to arrive for their weekly rehearsal. Some are organizing their music and others are doing vocal exercises. Then there's a group of singers huddled around a small table with a dozen wine glass, running their fingers around the rims and then adding or subtracting spoonfuls of water. They have to make sure the glasses are exactly in tune.

These musical wine glasses will make an appearance in their upcoming concert in Columbus, a sort of progressive concert around some of downtown's most iconic buildings. Audience members and the choir will walk from building to building experiencing a piece of live music at each location. The wine glasses are featured in Eriks Esenvalds' "Northern Lights," which is being performed at the Lincoln Elementary School.

Second soprano Marie Monts is a founding member of Voces Novae. While she has visited Columbus before, she's never been inside any of the buildings. Singing "Northern Lights," she starts to paint a picture of what the school might look like.

"Being in a boat, you sort of wonder what the building's shape will be," she says. "But you're also seeing all the sparkling, wonderful Northern Lights and the vastness... It intrigues me what format is Sue seeing in that building that we're going to be projecting through the music?"

Swaney selected music based on what she found most interesting about a building. For the Lincoln Elementary School, the boat-shaped gymnasium is the most obvious connection. Composer Esenvalds and architect Gunnar Birkerts also share Latvian heritage.

But if you know where to look, you'll see other connections, like the moat around the outside.

"And then once you walk up inside the building, the largest volume of space is the gymnasium, the gym and then the glass walls surrounding it which is lined completely in wood and has a separate skin like a boat in a sense, or a hull," says Kelly Wilson, the Director of the IU Center for Art + Design (IUCA+D).

Wilson believes anyone can spot a great building, but few have the eye of a designer and can tell why it's great. "My job was to show (Swaney) how to read the voices, the authorial voice the designer put into the building."

Designers speak the language of music all the time when describing a great piece of architecture movement, vibration, dynamics so Wilson says it's only natural to bring a choir into these spaces.

Swaney says this collaboration is about slowing down.

"I felt the music gives people the chance to experience the architecture instead of driving by in a bus or walking in and going, 'Hm, nice space,'" she says. "They actually sit in it for 10 minutes and experience it with more of their senses."

And moving music out of the concert hall and into these real-life contexts is how Voces Novae hopes to bring new audiences to classical music.