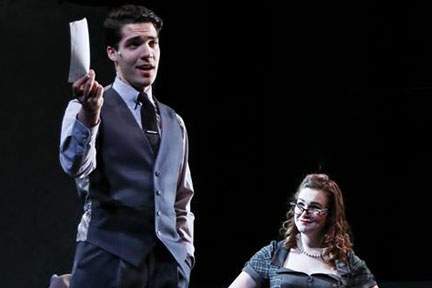 Joshua Scott Carter as Stone, the detective, with Mary Beth Black as Oolie, the secretary.

City of Angels at IU's Ruth N. Halls Theatre is a musical inspired by those dark mystery dramas like The Maltese Falcon. Larry Gelbart's book with David Zipel‘s lyrics and Cy Coleman's jazzy score pair a story of the frustrations of Hollywood screen writing and the noir detective fable that it produces.

That's the novelist turned screen writer Stine and his book's hero, the wise cracking, down at the heels gumshoe Stone.

At IU, Cole Winston is the novelist Stine and the book's  Stone is played by Joshua Scott Carter. Lisa Podulka is Alaura, "the blond who looks like trouble" as she walks into Stone's office.

Casey Lamont plays both Stine and Stone's wives. Mary Beth Black is Stone's loyal secretary Oolie and one of Stine's girl friends as well. Gabby and Oolie share their frustrations with their guys in "What You Don't Know About Women."

Dom Pagliaro plays Buddy the awesomely self-confident flamboyant studio director and producer. All eyes are on him as he's always demanding rewrite after rewrite from the frustrated Stine while scenes appear and disappear on stage. He explains it all in his song "Buddy's System."

Frankly, City of Angels at IU is a rich show that sometimes seemed to lose focus. It's a tough show to follow. Most of the leads play two contrasting characters and keeping them straight can be a struggle. I especially enjoyed Casey Lamont as Bobbi singing "With Every Breath I Take." Stone and Alaura's double entendre scene with a tennis racket was a hit.

Audie Deinlein as Alaura's missing daughter added to the fun as she tells Stine how happy she is that despite his novel's plot, Buddy's rewrite has  kept her alive in the movie. The singing of the Angel City Four was always welcome.

The IU production is directed by Richard Roland with musical director Terry LaBolt  and choreographer Liza Gennaro. Scenic design is by Alana Yurczyk with costume design is by Courtney Foxworthy. Balancing and enhancing the sounds was Andrew Hopson.

Stine and his alter ego Stone's "Your Nothing Without Me" was a strong closing song and reminder of the musical's twin plots.