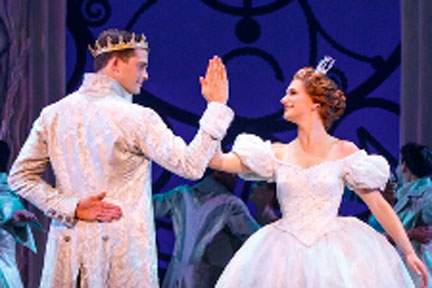 Cinderella is at the IU Auditorium in a winning production. The familiar music and lyrics by Rodgers and Hammerstein are all on display with "In My Own Little Corner," "Impossible/It's Possible," "Ten Minutes Ago" and "Do I Love You Because You're Beautiful?" Even If you know Cinderella from the movies or from the Auditorium in 2003 or from Bloomington Music Works in the Buskirk-Chumley in 2002 there are plenty of richly interesting surprises. The new book by Douglas Carter Beane adds lots of clever contemporary twists on the traditional story.

Louis Griffin as the Prince is very good at slaying dragons but overly concerned with just who he is. He's bullied about civil affairs by Christopher Swan his conniving prime minister who's aided by Vincent Davis as Lord Pinkleton. The Prince is also far from confident around women.

Tatyana Lubov is the downtrodden Cinderella. She's a bit on the edge of being too kindly toward all but when she graciously offers the Prince a drink quite wins his and our sympathy. Sarah Smith was nasty enough as the step-mother but also quite funny. The same might be said of Erin Weinberger as her tough cookie of a daughter and Nicole Zelka as the more sympathetic daughter.

Leslie Jackson was a potent figure as the Fairy Godmother encouraging Cinderella to believe in herself and in magic. Corbin Williams plays Jean-Michel, a charmingly inept student revolutionary. It's a new character for the story and nicely exploited.

The sets for Cinderella kept reminding mein a nice wayof those creative cardboard cut outs. Rooms, forests, courts and on and on came and went as the graceful and athletic cast made them come alive. The transformations of Cinderella and that coach were eye poppingly magical.

Louis Griffin and Tatyana Lubov were pleasantly sympathetic and sang well as soloists and together. Christopher Swan was quite perfect as the conniving minister. Vincent Davis was an imposing figure and singer as Lord Pinkleton. Leslie Jackson simply took over the stage in her appearances as the fairy godmother.

The IU Auditorium didn't skimp on educational opportunities for Cinderella. Dr. Brandon Barker of the Department of Folklore and Ethnomusicology led a preshow discussion. After the curtain audience members were encouraged to stay and talk with members of the cast including IU grad Kaitlin Mayse.

The production wraps up its visit this evening at 7:30.

Cinderella comes on the heels of The Sound of Music. You can find a review of it and of Cinderella at WFIU.ORG/ARTS. Coming soon to the Auditorium will be two more musicals, Cabaret in March and The Wizard of Oz in April.