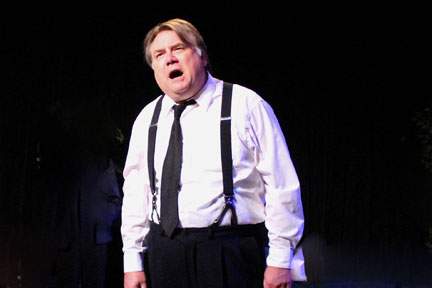 The Jewish Theatre of Bloomington presents Jason Odell Williams' Church and State. Williams describes it as "A timely political drama" and that it is.

With three days to go before a close election, the senator has been preparing to deliver his standard stump speech to an audience of eight hundred of the faithful.  Alex Klein, the campaign manager, Tom a staff member and his wife Sara all arrive at once. They're both relieved and angry. There's less than fifteen minutes before the senator's appearance and he's been missing.

He explains that he just took a walk to clear his head. Gradually, with considerable prodding from the manager and his wife, he admits that he may have spoken unwisely, though from the heart to a news blogger. The senator, overcome with the day's funeral for the victims of a recent school shooting, admits that he said that he hasn't been taking consolation in prayer, that as a politician he should be doing something to prevent further tragedy and that he questions a god who would let this happen.

The campaign manager and his wife are dumbfounded and their first reaction is to try patch over this potential blow to the senator's standard message of Christian family values and defense of the gun owners' Second Amendment rights. Even, as the blog goes viral on the internet and is  picked up by a major news organization, they're both for ignoring the story and going ahead with the standard speech.

However it seems that the senator has been progressively examining his faith over the years. As a six year old he was comforted when adults told him that his father was an angel in heaven looking down on him, but he's had doubts since. Church and State offers a thoughtfully illuminating account. Later years and the growing ardor of his wife for the forms of worship have actually led to a bit of a rift between them that the play explores in detail.

Despite the heartfelt urgings of his wife and campaign manager for the standard speech, the senator surprises everyone with a heartfelt conversation about his failure of faith and his advocacy of gun control. The reaction by his stunned followers in the auditorium is chilly, but the internet this time is his ally as the message spreads.

The election results are a staggering victory. As his wife and the campaign manager sum it up, the liberals all voted to support his stance on gun control and the conservatives voted in hopes that his faith would return. There's a long celebratory scene with a jubilant and drunken wife, a more sober campaign manager and the senator who's now not at all sure that he wants to take the coming abuse on Capitol Hill to defend his positions.

Buoyed by the victory and the encouragement of his team, the senator reluctantly squares his shoulders and agrees to deliver the canned acceptance speech.

Stephen Hunt was a pleasure to watch as the troubled senator, a good man working through the burdens of a family tradition, a rigid upbringing and the realities of tragedy and politics. Abby Lee as his wife showed real depth as the dutiful though judgmental wife with the memories of when she was smart, talented and more fun. Alex Klein as the Jewish New York campaign manager has the thinnest role, but her outsider comedy with Sara and the senator got the biggest laughs of the evening. Jonathan Golembiecki did a fine job as the witless staffer, the clever blogger and the Senate's Marshall. Skillful and fluid direction is by Liam Castellan.

The Jewish Theatre of Bloomington's production of Jason Odell Williams'' Church and State  in the Rose Firebay of the Ivy Tech John Waldron Arts Center  plays Thursdays and Saturdays May 10, 12, 17 and 19 at 7:30 with a closing three o'clock matinee on Sunday the 20th.

And…I'll skip a spoiler, but it's the senator's wife who delivers the play's final message of faith, works and…  "lots of follow through!"

You may find this review and an interview with members of the cast at WFIU.ORG/ARTS